Through their outreach, expertise, marketing and incentives, these are the professionals who attract and grow businesses, adding to the commonwealth’s wealth.

When you think of the Charlottesville area, military-related business may not spring to mind. If so, Lettie Bien says, “You’re not alone.” But Albemarle County’s fifth-largest employer is the U.S. Department of Defense. There’s also Rivanna Station, home to the U.S. Army’s National Ground Intelligence Center. Additionally, the University of Virginia has ROTC, defense contracts and the U.S. Army’s JAG Legal Center and School, she notes. That’s not to mention area military retirees. To support and leverage those connections, the Charlottesville Regional Chamber partnered with local economic development interests to hire Bien in July. “What they saw was this was a huge economic engine that they could not afford to ignore,” Bien says. A combat veteran and lawyer, Bien holds a master’s degree in public policy and serves as an Army Reserve Ambassador.

A national search led Danville back to one of its own. The city tapped native Corrie Bobe to lead its office of economic development in July. A Virginia Tech graduate, Bobe has worked for the office since November 2009 and served as interim director since January. The pandemic forced her team to focus on existing business support, she says — offering grant programs, marketing materials, PPE access, e-commerce support and a retail consultant who advised businesses on adjusting spaces to meet new pandemic safety guidelines. Despite the downturn, prospect activity remains strong, she says: “I feel our region will see new corporate partners added over the coming year.” She also plans to hire a tourism manager by the end of the year to bring that industry into focus for 2021.

Jared Chalk was named Norfolk’s economic development director less than six months ago, but he isn’t a new face in Hampton Roads. Chalk has been with Norfolk since 2005, and he has served as interim director of economic development and executive director of the Norfolk Economic Development Authority since November 2018. A Bridgewater College graduate, Chalk also earned a certificate in real estate finance and development from the Massachusetts Institute of Technology. Projects on his plate for 2021, he says, include the Norfolk hotel and casino resort and turning the former Military Circle Mall into a commercial district, “one of the largest commercial redevelopment projects in this area.”

Preparing to launch in 2021, the Hampton Roads Maritime Collaborative for Growth & Innovation aims to bolster the region’s maritime industry. This is the moment in time for such an effort, says Nancy Grden, the umbrella organization’s first executive director. “We have an amazing set of opportunities and assets that are right in front of our face,” she says, “and we tend to shy away from them.” She cites shipbuilding, the military, offshore wind, transatlantic cables and the Hampton Roads Bridge-Tunnel expansion. A Pittsburgh native and former bank executive, Grden says the collaborative will be “action-oriented,” working to coordinate diverse initiatives and seeking to inject more innovation and entrepreneurship into the region’s maritime sector. “The cool thing is really bringing all that together,” she says.

To become the fastest-growing, most successful region in the country, JB Holston says, the Capital Region, stretching from Baltimore to Richmond, needs to have the most inclusive economy. That leads him to an area of work he intends to explore in the next year: “Inclusive growth.” Holston, whose career includes senior executive positions at GE and NBC, moved to D.C. from Colorado, where he was dean of the University of Denver’s school of computer science and engineering. He took the helm of the partnership in September, leading the alliance that represents businesses employing more than 250,000 people in the region.

Kate Keller was named president of The Harvest Foundation in July, after more than 20 years working for Interact for Health, a foundation in Greater Cincinnati. It was a fortuitous background to have in the midst of a pandemic. About 65,000 people live in the Martinsville and Henry County region, which saw a downturn in its furniture and textile industries in the ’90s. “They sort of lost their sense of who they were when that happened,” says Keller. But efforts to restore that energy in the last 10 years have paid off. A recent win was landing Poland-based Press Glass as the first tenant of a key industrial park. Up next is more funding for affordable housing, Keller says, and a campaign to become more accessible and inclusive for the whole community.

In late October, Gov. Ralph Northam announced that the Virginia Values Veterans (V3) Program surpassed its goal of hiring 65,000 Virginia military veterans by the end of his administration. Ross Koenig played a major role in the success of the initiative administered by the state Department of Veterans Services. Its goal is to connect Virginia veterans to the workforce by assisting with recruiting, hiring, training and retaining military veterans in civilian jobs. In other milestones, V3 in February certified its 1,000th employer committed to hiring veterans. Koenig has been working with the V3 team since the program’s 2012 inception, starting as its regional manager for Central and Southwest Virginia until his promotion to program manager in 2017.

Like other events forced to adjust to the pandemic, the annual Governor’s Summit on Rural Prosperity went virtual in October. It’s fitting that the summit’s host, the Virginia Rural Center, advocates for broadband access across the state. Half a million Virginians have no access to it — and they don’t necessarily live in the middle of nowhere. Kristie Proctor, for one, lives in Hanover County, where her family’s house has a well, a septic system and no broadband. In addition to connectivity, the organization works to promote economic prosperity in rural areas. In 2021, Proctor will oversee the launch of the Virginia Rural Leaders Institute. Its goal is to attract, develop and retain leaders in the state’s rural communities, where they’ll create tangible results via community impact projects.

A literal line down State Street in downtown Bristol divides Tennessee and Virginia. It’s a unique challenge for a chamber serving a community with two governments, two school systems, “two everything,” Beth Rhinehart says. A Bristol native, she sees opportunity in working as a united front, such as with the chamber’s tourism initiative, Discover Bristol. The recently approved $400 million Hard Rock casino will boost that effort. But another key will be diversifying the economy, she says, along with developing the workforce and making it an attractive location for the area’s young people. She also promotes Bristol as a magnet for remote workers. A GO Virginia Region 1 council member, Rhinehart was selected this year for the U.S. Chamber of Commerce Foundation’s Business Leads Fellowship Program.

In her newly created dual position, Michelle Rogers is charged with finding better ways of connecting businesses with the worlds of workforce development and higher education. Rogers was an Air Force brat before landing in York County for high school. She worked in state economic development for almost 15 years before starting her new role in July. It’s the first position of its kind in Virginia, she says, a partnership between Virginia’s Gateway Region and the Community College Workforce Alliance. She’ll work as a liaison, helping to identify the region’s business needs and develop the educational programs and support to meet those needs. 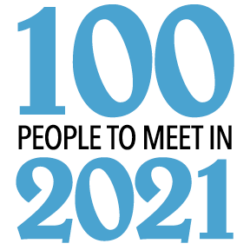 Our annual list of Virginians you should get to know