If they build it, will Beyoncé come?

NH District Corp., a group of corporate leaders headed by Dominion Energy CEO Thomas F. Farrell II, wants to reinvent a section of downtown Richmond with a $220 million arena as its centerpiece.

At the group’s planning sessions, one topic inevitably is discussed, and it has nothing to do with bond initiatives or blueprints:  “It comes up in every meeting: This can take Beyoncé,” says Jeff Kelley, the group’s spokesman.

Major entertainment acts, such as Beyoncé’s, tend to skip the city because the drab, 47-year-old Richmond Coliseum can’t accommodate them, Kelley says, but “these acts [would be able to] stop in Richmond now. … They can stop right here and be in an amazing neighborhood in a killer arena.”

The city is considering NH District’s proposal for a $1.4 billion mixed-use, residential and business project in which a 17,500-seat arena would replace the 12,000-seat Coliseum. The entire project, built on city-owned real estate, would be funded via a mixture of publicly backed bonds, private investment and the creation of a special tax district.

Kelley says, “People ask, ‘Why do we need to have an arena?’ And, you know, I think our answer is: We deserve it. Richmond is becoming a world-class city, and world-class cities have amenities like this, and, in my personal view, I think it’s time. We’re due.”

The proposed redevelopment project is just the latest evidence of the Richmond area attempting to take a larger spot on the nation’s stage as a greater lure for corporate relocations and investment. 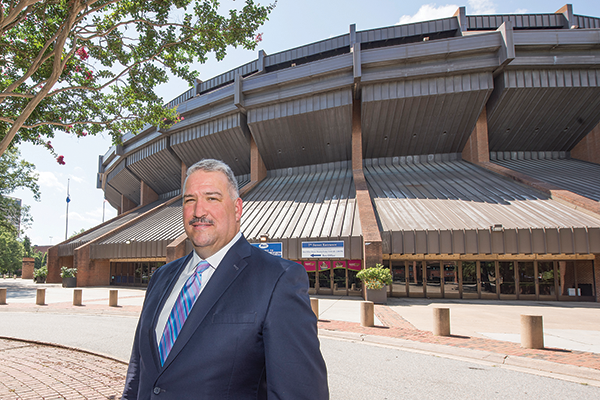 “Quality of life is becoming more important for companies in attracting talent to this region,” says Barry Matherly, president and CEO of the Greater Richmond Partnership. And as companies look at factors that would attract desirable millennial and Gen Z workers to the region, they are noting that Richmond lacks a facility for larger music and pro-sports events.

The arena proposal would give Richmond the ability to create a new neighborhood from scratch.

“These are once in 30- to 40-year projects. And so the ability to shape an area with a major project with a coliseum … is what other cities are doing in venues that can be used for entertainment or concerts or sports,” Matherly says.

NH District’s proposal would transform a 21-acre, 10-block downtown area that, in addition to a new arena, would include a 527-room hotel, a bus transfer plaza, condominiums, 2,800 apartment units and 176,000 square feet of retail. The project also includes a $10 million renovation of the city-owned Blues Armory building, which may include a new food court. The neighborhood, which is surrounded by Virginia Commonwealth University Medical Center, the VA Bio+Tech Park and the J. Sargeant 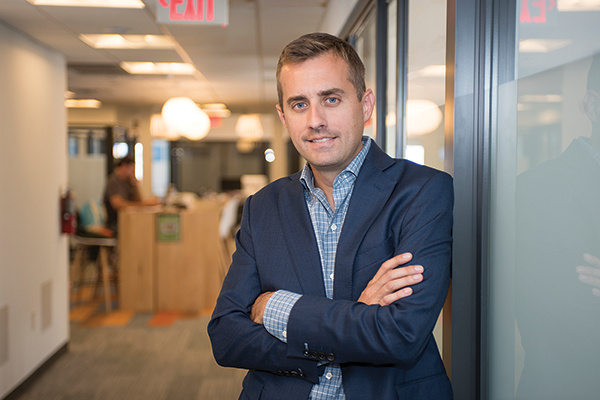 The effort would “create a walkable urban center” and connect the city’s economically depressed East End with new employment opportunities, Kelley says. And, he adds, “If it goes forward, it will be the biggest minority-business opportunity in Richmond history. Somewhere around $170 million will be set aside for minority contractors.”

The plan would create a special tax increment-financing district around the arena. Tax revenues from the area would be used to cover debt service on bonds used to finance the public facilities in the project, including the new arena. Dominion has suggested that the district include its two downtown office towers a half mile away, one of which is under construction. The towers would generate an estimated $165 million in tax revenues during the next 30 years.

The Richmond City Council initially was expected to consider the NH District proposal in September. In mid-August, however, Richmond Mayor Levar Stoney told the Richmond Times-Dispatch the city still was negotiating with NH District on some key issues.

“We’ve made significant progress on several of the deal points that I’ve said are absolute must-haves for the city —especially on affordable housing and minority participation,” Stoney said in a statement.  While there are “details to iron out before we take it to City Council,” the mayor said he remains “confident we will get this done.”

In its statement, NH District said it “will meet the Mayor’s vision and address Richmond’s need by delivering the community’s largest commitment to affordable housing, the largest level of minority participation Richmond has ever seen, thousands of jobs and training opportunities for Richmonders, and new tax revenue for core services.” 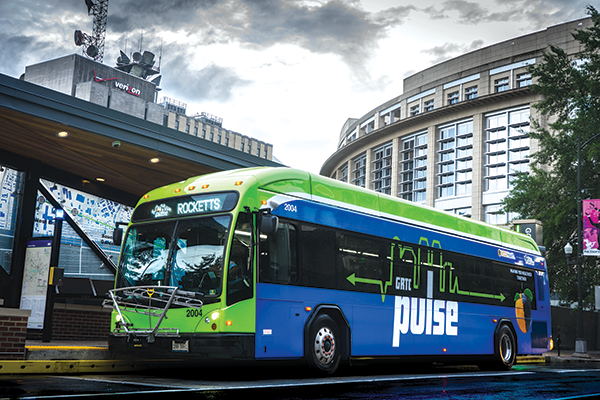 Another way that Richmond is working to become more appealing to younger professionals, Matherly says, is with transportation projects such as the Greater Richmond Transit Co.’s recently launched Pulse rapid bus transit service. The Pulse runs for 7.6 miles along Richmond’s Broad Street corridor from Rocketts Landing in the east to the Willow Lawn shopping center near the Henrico County line in the west.

Combined with dedicated bike traffic lanes that the city has added downtown in recent years, the Pulse provides transportation alternatives to millennial and Gen Z workers who eschew driving and car ownership.

While the Pulse bus lanes and transit shelters were under construction, the project disrupted traffic, angering some local merchants whose shops became difficult to reach. Nonetheless, the new service appears to be a hit. In the first month after its launch in late June, Pulse had already exceeded its ridership expectations, says GRTC spokesperson Carrie Rose Pace. “We’ve done at least a thousand better than the goal every day,” she says.

Pace added that the GRTC expects an even more significant spike in ridership with VCU students returning to school in this fall. In a one-year pilot program, Virginia Commonwealth University is paying the transit system $1.2 million to allow VCU students and employees to ride GRTC buses for free.

Upgrades at river port, airport
Economic development opportunities for the region also have been aided by recent infrastructure upgrades to Richmond International Airport and the Port of Virginia’s Richmond Marine Terminal on the James River, Matherly says.

One recent business prospect, a maker of technical devices, was pleased to learn that Richmond offered the company an opportunity to receive raw materials by barge and to ship finished products out by air.

In September, Richmond International Airport began work on a $35 million extension of Concourse A, adding six gates to meet growing passenger demand. The project will increase the total number of gates at the airport to 28. 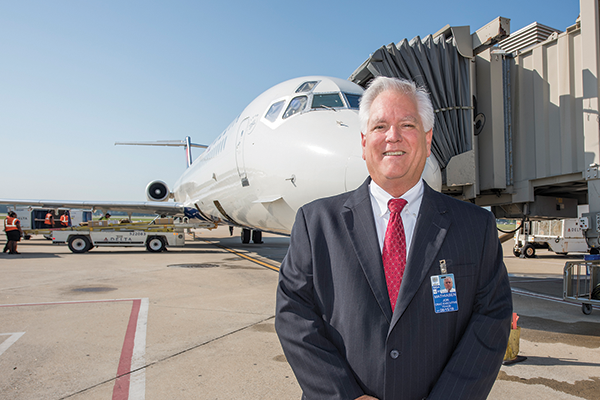 “Increasingly, RIC is seeing growing demand for overnight aircraft parking positions. Late-night arrivals become the next morning’s kick-off flights,” says Jon E. Mathiasen, president and CEO of the Capital Region Airport Commission. “While the airport can meet current requirements, the goal is to stay a bit ahead of the demand curve to meet foreseeable future needs.”

“Facility expansion at Richmond International Airport is a reflection of the Richmond region’s growth,” Mathiasen says. “If the economy continues its current trends, I see nothing but growth ahead for RIC and the community it serves.”

In recent years, the Richmond Marine Terminal also has made a host of multimillion-dollar infrastructure improvements. The changes include a new harbor crane and an improved 409-foot river cargo barge equipped to carry refrigerated cargo.

The changes allow the port “to provide a more comprehensive level of barge service to current and potential customers and continue to serve as a catalyst for commerce in the Richmond metro area and beyond,” says John F. Reinhart, CEO and executive director of the Virginia Port Authority, which leases and operates the Richmond Marine Terminal.

In response to the terminal’s ability to handle more cargo, the Greater Richmond Partnership and area economic development officials have launched an export initiative. The goal is to have every cargo container arriving at the terminal bearing imported goods returned with exports from Virginia. “Every container that comes in here, we want something else from a Virginia or Richmond company to go back the other way,” Matherly says. “Trade is a two-way street.”

Construction boom
Driven in part by the upgrades to the Richmond Marine Terminal and by what some real estate industry analysts are calling a “golden age” of distribution warehouse construction, there is an explosion of commercial development along the Interstate 95 corridor around the river port.

“That wouldn’t be happening,” Matherly says, “if the port had not been upgrading and able to attract more volume.”

Just a few years ago, Matherly notes, Richmond didn’t have any speculative warehouse space. Now warehouses are being built at a steady pace, spurred on by demand from internet businesses and developers’ confidence in Richmond’s strong, diverse economy. For example Richmond developer Devon USA, which last year built a 328,000-square-foot spec warehouse that became an Amazon distribution center in Hanover County, now is building a $20 million, 321,000-square-foot spec warehouse at the James River Logistics Center in Chesterfield County.

This year, Richmond’s industrial warehouse market is expected to expand its high-bay inventory by more than 2.7 million square feet, a 13 percent increase, according to CBRE.

All of these indicators point to a healthy economic outlook for the Richmond region, Matherly says.

But, he adds, the people planning new projects need to remember to keep one question in mind: “Is this going to help us keep the young professionals?”