Brick-and-mortar retail is struggling, but don’t write the obit yet

When developer Rob Hargett was a teenager in Henrico County in the 1970s and early 1980s, Regency Square mall was the place to shop and socialize. If Hargett’s plans succeed, it will become a major Richmond area attraction again, just not in the same way.

America’s retail industry is in the midst of a major restructuring. By the end of the year, industry experts expect a record number of store closings — anywhere from 7,000 to 8,000 — as brick-and-mortar stores struggle to compete against a rising tide of online shopping.

Yet don’t write the obituary for retail yet. Behind the closings and bankruptcies is a story of evolution as store and mall owners look to innovation and technology to transform retail into experiential gathering places that will draw people and sales.

Take the case of 42-year-old Regency Square. Like many malls around the country, it’s been steadily declining over the past 15 years. Hargett’s company, The Rebkee Co. in Midlothian, and Richmond-based Thalhimer Realty Partners Inc., bought a majority interest in the aging indoor mall for $13.1 million in 2015. Since then, Regency has lost key anchors Macy’s and Sears.

Still, Hargett sees a brighter future. The new owners are investing $30 million in a redevelopment plan designed to transform the mall into a 21st-century community draw.

Regal Cinemas plans to open a new theater complex in one of Regency Square’s former Macy’s spaces by spring 2019. “That’s a great restaurant supporter,” observes Hargett. He expects the theatre to draw thousands of visitors a year, which should put extra eyes on the center’s retail offerings.

Hargett hopes to attract other experiential retailers, such as an indoor go-kart track or a children’s gymnastics center, into spaces vacated by anchors. The addition of off-parcel restaurants such Starbucks, as well as developing office and possible multifamily residential components, are other ways developers hope to increase daily mall traffic.

Besides creating experiences, keeping costs and rents down is key, says Hargett. That way tenants can afford to be competitive with online retailers, and online retailers who want to expand into physical spaces can do so with low overhead.

“The retail landscape is changing, and we know it’s going to be more and more challenging,” says Hargett.“We have to cultivate the winners and, in the meantime, we have to have other reasons for folks to come here.”

Brett McNamee, a commercial real estate broker who has specialized in retail development for years, also believes brick-and-mortar retail has a future. “You’re not going to get any death knells from me. I love my industry. We’re not declining; we’re changing,” says McNamee, a senior vice president with Divaris Real Estate in Richmond.

Retailers who will weather the storm best, McNamee predicts, are those who can provide a multichannel approach — marrying e-commerce with bricks and mortar and embracing technology to create a more convenient shopping experience for consumers. “Those are the guys who are going to be here with us and doing better and better for the long run,” she says.

Closings
In the meantime, though, many big-name players in retail are struggling to stay afloat while others are drowning or are already dead.

Annual retail store closures are estimated to reach a 20-year high in 2017, with as many as 7,000 stores closing, according to a report released in May by Silicon Valley-based venture capital firm Kleiner Perkins Caufield & Byers. 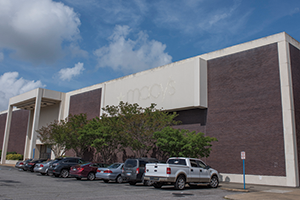 Anchor department stores such as Macy’s, Sears and J.C. Penney are collectively shuttering hundreds of stores. More than 60,000 retail jobs were eliminated in just the first quarter. American Apparel filed for bankruptcy and laid off thousands of workers while women’s apparel retailer Bebe closed all of its 168 stores, shifting its remaining business entirely online. Signet Jewelers is closing 170 stores, mainly in malls, while office supply retailer Staples is shutting down 70 stores.

At Berkshire Hathaway’s annual meeting this spring Warren Buffett said that “the department store is online now,” stating his belief that the retail industry will be completely changed within a decade. Meanwhile, retail analysts at Credit Suisse have said that as many as 25 percent of U.S. shopping malls will close by 2022, due to competition from e-commerce. Credit Suisse also estimates that online apparel sales will more than double by 2030, climbing to 35 percent of all e-commerce transactions.

Nevertheless, Nancy Thomas, CEO of the Virginia Retail Federation, points out that e-commerce sales still account for less than 10 percent of all retail sales in the nation. “That’s the perception that people need to wipe away from their minds,” Thomas says. “[E-commerce] is gaining ground, but it’s still not what people want to do. They want to come into a brick-and-mortar store. But the brick-and-mortar stores and of course our malls just need to look different.”

The latest U.S. Department of Commerce data puts e-commerce sales at about 8.5 percent of all retail sales, a number that’s been climbing steadily for the last 10 years.

“A lot of those we’re seeing [closing] were struggling retailers to begin with,” says Connie Jordan Nielsen, senior vice president with Richmond-based commercial real estate firm Cushman & Wakefield|Thalhimer. “They weren’t strong enough to survive and then on top of that some retailers just haven’t adjusted well to [technology changes].”

Perhaps the biggest testament to the survival of bricks and mortar is the fact that Amazon is aggressively moving into the space. In addition to opening a handful of stores across the nation this year, Amazon announced in June its largest-ever acquisition — the $13.7 billion cash purchase of Whole Foods grocery stores. Shares in Kroger and other large grocery retailers (a necessity retail sector considered largely immune to e-commerce disruption), took significant share-price hits on the news.

Envisioning the future
So what does the future of physical retail look like? 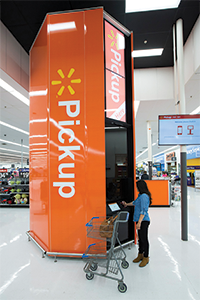 “Saving customers money but also saving customers time … is becoming increasingly important,” says Bob Davis, vice president and regional general manager in Virginia for Wal-Mart Stores. One of the new innovations the national retailer will be unveiling in stores this year is an 18-foot-tall, self-service pickup tower for online orders. That way customers “can literally be in and out of the store in moments,” says Davis.

Wal-Mart also is testing a new delivery option, paying store employees at some stores a little extra to drop off online orders to customers on their way home from work. “The most expensive part of any online transaction is what’s known as the last mile, and everybody’s trying to solve for that,” Davis says. “With over 4,200 physical locations nationwide, it gives us a pretty good competitive advantage if we can scale that.”

Other retailers are experimenting with new models, too. Best Buy is launching an initiative to allow customers to rent expensive gadgets before they commit to purchase.

The biggest buzzword in retail right now, however, is “experiential.” That’s evident at Virginia’s newest mall, Norfolk Premium Outlets in Norfolk. Opened in late June by Indiana-based Simon Property Group, the mall offers more than discounted clothes from name-brand stores. Located alongside a lake, its amenities include a gazebo and pier, lakeside dining and a one-mile walking path along the lake. The $75 million, 332,000-square-foot mall, located off Interstate 64 at Northampton Boulevard, was designed as a retail destination, where people and tourists could shop, eat at one of its many restaurants, or relax with a stroll around the lake.

“Retailing works when people gather. The mall has been [a place] where retailing is the draw that brings people in, but that’s no longer the case. You’ve got to find other draws,” says Jeff Tanner, dean of Old Dominion University’s Strome College of Business. “The ability to [showcase] a variety of goods, that’s not going to be sufficient; people can get that from the Internet.”

From the smallest retailers to the biggest mall developers, everyone is focusing on the experience of combining shopping, dining and social media. In 2016, McNamee notes, consumer spending at restaurants outpaced spending at grocery stores for the first time. Grocers are also seeing increased demand for prepared foods.

That’s the sort of customer Hargett is hoping to attract to Regency.

Its redevelopment includes an exterior makeover and the demolition of a parking deck as well as roadway improvements to improve visibility to the mall. Rebkee already has added an office component.  He also hopes to acquire the Sears parcel for a possible multifamily residential development that could merge with the surrounding neighborhood and generate more daily traffic, while also revitalizing neighboring businesses.

“A lot of people are [already] gathering here,” ranging from food hall patrons to mall walkers, notes Hargett. As experiential retail helps grow the mall’s community, he hopes Regency will experience a comeback.

Rebkee’s plan for Regency is for it to “become more of the fabric of the way we live, like [malls] used to be.” 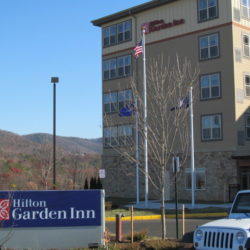