Adding some color to crisis

Richmond artist Noah Scalin was commissioned by Richmond-based advertising company The Martin Agency to create an art installation, released Tuesday, announcing Old Navy’s donation of $30 million worth of clothing to families in need during the pandemic.

Known for creating large-scale pieces made from ordinary items, as well as his Skull-A-Day project, Scalin created a 40-by-20-foot piece entirely from Old Navy clothing for the project (see video below). His art is made using an anamorphic perspective, which appears distorted from up close and looks correct only from a particular vantage point. In this case, the Old Navy commercial shows the installation from an overhead view.

“I really loved this idea that they were going to be donating all this clothing to families in need, which was really exciting to me,” Scalin said. “And so it immediately got me thinking about how I do my portraiture and how we might combine that with their message of family and try something new.”

Old Navy, which is owned by The Gap Inc., hired The Martin Agency in February as a creative agency partner.

“Family has been at the heart of everything we do since 1994, and we know that families across America are hurting right now and are in need of essentials,” an Old Navy spokesperson said in a statement.

“This was similar in that it was that technique I’ve been developing, but very different in that now it was a family and much larger than the previous pieces I’ve done and included a background as well,” Scalin said. “All of this was new for me in the most ambitious piece I’ve done in this style yet.”

Also, Scalin didn’t know which pieces of clothing he’d be working with until he arrived at the site where the art installation would be created and filmed.

“Many large boxes showed up, filled with clothes I’d never seen before and I had to basically go through them and figure out what colors were available, organize them by color, and then start working,” Scalin said. “Once I’m working, I’m making choices the entire time about what color palette I have to work with. I basically treat each piece of clothes like a stroke from a paintbrush.”

Typically, art installations take Scalin anywhere from 15 to 20 hours to complete — not including all the time it takes to prepare and plan. Social distancing measures stretched the length of Scalin’s project because assistants weren’t around to help him out during the five days he worked on the project. It was also the first time he’s had to wear a mask and gloves for the entirety of a project, he added.

“You have no idea what to expect until the end when everything clicks and it’s mesmerizing,” said Martin Agency Art Director Sally Lee. “It’s almost like watching someone complete a puzzle — except it’s 40 feet big, made of clothing pieces and for a cause. In a time when we’re so limited in our production capabilities, and every commercial is starting to look the same, it’s nice to be able to do something that’s completely different.”

Now that the art installation has been completed and has been documented by Old Navy, the stockpile of 1,000 clothing items used for the project will be donated. Old Navy is working with nonprofit organizations including Good360 and Baby2Baby, as well as transportation company Penske Logistics to distribute the clothing.

“It was a great discovery for me to see what I was capable of doing and knowing that in the future as I make pieces like this that I could be even more ambitious with them,” Scalin said. “But it was a really wonderful thing to have that opportunity. And then the trust of both Martin and Old Navy in me to create something for them — with this kind of work, you don’t know what the end result is until it’s actually done. That requires a great deal of trust.”

Also the firm's COO, Molly Whitfield will be the firm's second president. 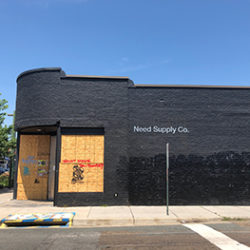