This was a golden opportunity.

The 2012 law allows Bristol and other Virginia cities that border other states to keep 100 percent of the sales taxes generated by a new retail center to pay for the development, if it meets certain criteria. It must have a capital investment of at least $50 million, generate at least $5 million in tax revenues annually and draw 1 million visitors a year.

“We were once again in a position to be competitive,” Cashwell says, referring to similar legislation passed in neighboring Bristol, Tenn.  Bristol, Va., officials feared that the new Tennessee law would make it easier for its neighbor to lure retailers and significant development away from Virginia.

“We’re off to the races now,” Cashwell recalls thinking, once Virginia had pulled even, legislatively,  with Tennessee.  Since then, the city’s plans have taken off. In the past year, one of the country’s largest outdoors retailers, Cabela’s, chose Bristol for an 85,000-square-foot store. Construction will begin this year, with plans for the store to open in the fall of 2014 as an anchor to a new $200 million retail center, The Falls.

But wooing this Sidney, Neb.-based retailer to Bristol was not a fast feat. Three years ago, Cashwell became Bristol’s city manager with a mission ― turn this Southwest Virginia Tri-City, known as the birthplace of country music ― into a retail destination. Bristol’s Exit 7 on Interstate 81 has grown into a bustling business hub, with Walmart, Home Depot, Starbucks and a host of other national retailers landing locations there.

Yet Bristol’s economic renaissance doesn’t stop at Exit 7. Plans are taking shape for The Falls, a shopping area that will stretch across 140 acres near Bristol’s Exit 5. It would house about 1.5 million square feet of space for stores, restaurants and hotels.

The groundwork for this project began in May 2011 when Cashwell and Andrew Trivette, Bristol’s director of community development and planning, former Mayor Ed Harlow and members of development firm Interstate Realty Advisors traveled to a ReCon convention in Las Vegas, a networking and deal making conference for the retail industry.

There they spoke with representatives for Cabela’s and one of its competitors, Missouri-based Bass Pro Shops, about considering Bristol for a store site. Bristol’s national parks, lakes and array of outdoor amenities would be the perfect spot for one of these retailers, the group thought.

“You sell what you have and that’s what we have,” Cashwell says. “We have a beautiful surrounding.”

Initially, Bass Pro representatives appeared interested in Bristol, he recalls. Then, the city’s conversations shifted to Cabela’s, which has 40 stores in the United States. Cabela’s “pushed our project ahead in their scheduling activities and got us through their process fast,” Cashwell says.

It included several visits to Bristol by top Cabela’s representatives. They looked at the site and talked about potential plans with city officials. Next to arrive was Cabela’s letter of intent, which is a statement that a retailer submits confirming its intention to open a store in a specific location. Bristol officials received the letter in July. “We were ecstatic,” Cashwell says.

In December, Cabela’s signed a contract to buy 10 acres of land for its Bristol store. The city has issued $25 million in general obligation revenue bonds for the project, and it will pay for the development through revenue bond financing, Trivette says. Cabela’s will pay the city $5 million for its land.

Cabela’s spokesman, Wes Remmer, would not disclose specific details about how and why the retailer chose Bristol as its first Virginia store, citing competitive advantages. “We look to open stores in areas where there is a loyal Cabela’s following and where outdoor recreation is popular,” Remmer said an email. “Not only do we love Bristol, but we love the entire region. So, it’s a great fit.”

The Falls will be developed in three phases. In late January, Cashwell would not disclose the seven additional retailers slated for the project’s first phase. The city has spoken with such retailers as Dillard’s, Kohl’s, Costco and restaurant chain Buffalo Wild Wings about coming to The Falls, he says.

As for Cabela’s, the retailer is planning an addition to its Bristol store. It will be done with the chain’s signature log design exterior, metal roof and displays of wildlife memorabilia.

Along with hunting, fishing and camping gear, a gun library and a fudge shop, the Bristol store will house a power-sports section for boats, all-terrain vehicles and related accessories, Remmer says. The new power sports add-on will require the store to expand by 8,000 square feet.

Meanwhile, not too far away, a Cabela’s competitor is preparing to make an entrance — across state lines. Bass Pro Shops plans to open a store late this year or in early 2014 off I-81 in Bristol, Tenn., near the state’s welcome center. 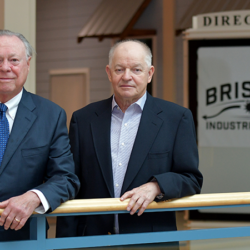