Plus, they’re tapping into a pipeline of skilled technical workers, he adds. “The engines are the University of Mary Washington and Germanna” Community College.

Fredericksburg
Fredericksburg itself may be small, only 10.52 square miles, but “it benefits from the growth in the region, from being the downtown of the region,” says Bill Freehling, the city’s director of economic development and tourism.

Fredericksburg’s population grew 26% from 2000 to 2010 and another 20.5% from 2010 to 2018 to an estimated 29,144. That pace makes it one of the fastest-growing localities in Virginia. Rapid growth has been taking place in surrounding counties for decades.

Lots of redevelopment is taking place in the city, where two developers are transforming the 4.5-acre former headquarters of the Free Lance-Star newspaper into commercial space, restaurants and a garage. “It will be a gateway into downtown and will provide a lot of energy,” Freehling says. 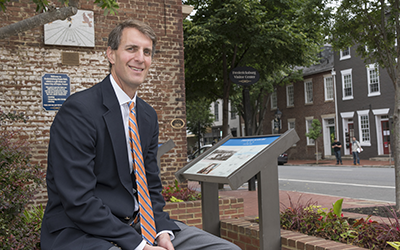 The city also is seeing “a healthy amount of in-fill growth,” he says, adding that the architectural review board protects the core of the city, a 40-plus-block National Historic District.

A groundbreaking ceremony was held in February for Fredericksburg’s $35 million baseball stadium. “We’re shooting for an April 2020 opening,” says Freehling.

While the Carolina League’s Potomac Nationals will be the anchor tenant, the stadium also will host additional activities including concerts and other sporting events, Freehling says.

“It’s multipurpose. It’s a new amenity for the whole region,” says Roberts, adding  “the new baseball stadium is ‘place making’ in a lot of ways. The more attractive you make the area, the more you can attract business.” 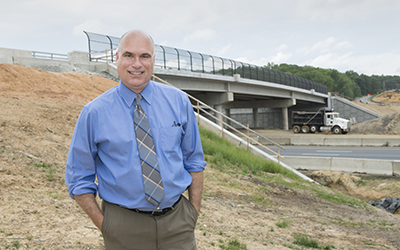 Stafford County has “the opportunity to develop a new urban core with all the bells and whistles,” at the redesigned Interstate 95/state Route 630 (Courthouse Road) interchange, says John P. Holden, the county’s economic development director.

The interchange is undergoing about $189 million in improvements to widen the highway and add lanes. Near the new interchange is the proposed George Washington Village, a 1,078-acre mixed-use development that has been described as the largest development tract in the Washington area to come on the market in the past 10 years. The property was put up for sale last year and as of early May was still on the market.

Stafford’s location and its fiber and power infrastructure already make it attractive for business, Holden says,

Gary Snellings, the chairman of the Board of Supervisors, says the county’s recently lowered tax rates for distribution centers and data centers “provide a bonus to a small component of existing businesses and encourages new large e-commerce, warehouse, distribution, logistics and data centers to take a serious look at Stafford.”

The county also has reorganized its tourism program, combining it with economic development efforts, Holden says. “We’re looking to expand the sports tourism market” by promoting the Jeff Rouse Swim and Sport Center, a 76,000-square-foot facility housing a 50-meter competition pool that has seating for more than 800 spectators.

Stafford (and Spotsylvania County) partner with VisitFred.com to promote tourism. “It’s about branding,” Holden says. “At the end of the day, people don’t care where the line is. We work with partners where it makes sense or we work on our own” to attract visitors.

Many residents near the site fought the proposed 500-megawatt solar energy facility, which would sit on 6,350 acres in the western part of county, but the Board of Supervisors approved special-use permits in April. Protesters raised concerns about possible health and environmental risks. The project, being developed by Sustainable Power Group (known as sPower) will be built in phases over the next two years.

The project will create approximately 800 construction jobs and 35 full-time jobs, according to sPower CEO Ryan Creamer. “We [will] be able to generate enough power with this project to supply the equivalent of approximately 111,000 homes and offset 340,000 tons of carbon dioxide emissions each year,” he says.

Work also continues in nearby 158-acre Keswick, a mixed-use development that includes apartments, town houses, age-restricted villas and single-family residences. A 36-acre public park is also part of the project.

Supermarket chain Harris Teeter is gearing up for construction of a 1.5-million-square-foot distribution center, which will add about 500 jobs, says Gary R. Wilson, Caroline’s economic development director. And Tysons-based M.C. Dean Inc., an electrical design-build and systems integration company, plans to invest $25.1 million to incorporate a new product line at its existing Caroline fabrication and distribution facility. That will add about 100 technology jobs, Wilson says.

“We have our fingers crossed for a stellar year,” he says. “We’re available for other private investors that are looking for space, fiber and great land.”

In March, the Secretariat Heritage Center was formed to celebrate the legacy of Triple Crown-winning racehorse Secretariat and his birthplace, Meadow Stable at The Meadow Event Park. The nonprofit organization plans to expand the current program of Secretariat-related tours. The site, which is listed on the National Register of Historic Places and the Virginia Landmarks Register, also is home to the State Fair of Virginia.

“The county has been instrumental in working on this from 2000,” Wilson says, adding that he hopes fundraising will be spurred by next year’s 50th anniversary of Secretariat’s birth. Two years later, 2023, will be the 50th anniversary of the horse’s dominating performance in the Kentucky Derby, the Preakness Stakes and the Belmont Stakes.

King George County
King George County is expecting a big boost in traffic. A new four-lane bridge is set to be built to replace the Harry W. Nice Memorial Bridge, a 77-year-old two-lane structure that connects King George with Charles County, Md. Construction is expected to begin early next year and finish in 2023.

“We’re pretty excited about that,” says Ryan Gandy, the county’s director of economic development and tourism. “We started a year and half ago, trying to identify what areas the county should focus on and how to grow smartly.”

Gandy hopes that a Pamunkey Indian Tribe proposal to develop and build broadband service will improve internet traffic in the area. “We’re looking at ways to get better coverage throughout the Northern Neck. People need to be online for education, health care, shopping,” he says. With better service, “contract employees who work for government could [telecommute] from home.”

Another problem the county wants to address is limited housing stock. “It’s hard for a single individual to find something that’s not a big house,” he says.

A big plus for the county is the U.S Naval Surface Warfare Center Dahlgren, which Curry Roberts describes as an engine for growth for the area. Roberts and Gandy note that the county and Fredericksburg Regional Alliance are helping inventors there commercialize their patents.

“We have some patent holders starting businesses,” Gandy says. “We have to get the ball rolling.”