Home News Better than all right

Better than all right

Fairfax County has always been a company town, and, historically, that company, the U.S. government, has been generous. Lately, though, Uncle Sam has turned tight-fisted, and the county now needs to find a new way to maintain the lifestyle to which it has become accustomed.

In the past couple of years, Fairfax County — and all the rest of Northern Virginia, for that matter — has been suffering from the full effects of curtailed federal spending and sequestration. During 12 months extending into the first quarter of this year, Northern Virginia (NOVA) lost 10,000 government and government-related jobs. They paid an average of $100,000 a year, so the job losses hit hard. Partly as a result, for the first time in recent memory, NOVA is underperforming the U.S. economy.

In 2012, NOVA had a growth rate of 0.8 percent, while the country grew by 2.8 percent, says Stephen Fuller, director for the Center for Regional Analysis at George Mason University. Last year, the region grew by an even more anemic 0.4 percent rate, compared with an admittedly less than stellar 1.9 percent national average.

The $23 billion in federal procurement spending Fairfax County saw last year is not likely to increase anytime soon, either.  “There are clear directives to continue to reduce spending,” says Bobbie Kilberg, president and CEO of the Northern Virginia Technology Council. So, best-case scenario: While the county’s public sector should be about done shrinking, in the short term, it isn’t likely to expand.

But Fairfax County is going to be all right — actually quite a bit better than all right.  Although it may take awhile to build momentum after its recent reversal in fortunes, the last two quarters of 2014 and each of the next three years are expected to be stronger than the last, according to Fuller. With an unemployment rate of 3.8 percent (as of April), people are working and starting to spend money again on retail and consumer services, he says. A pent-up need for housing will mean both new construction and renovation work. But more important to a sunnier day is the potential for growth in private-sector business. 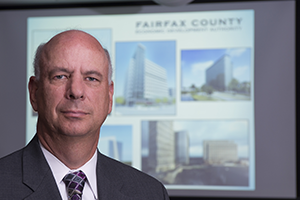 Gerald L. Gordon, president and CEO of the Fairfax Economic Development Authority (FEDA), says the county has almost 35,000 businesses with paid employees, including 10 Fortune 500 companies, and more than 400 foreign-owned firms. Many of these companies will need to continue to reduce their dependence on federal money, but the expertise they have offered their public-sector clients — in health care, unmanned vehicles and IT specialties including cloud computing, data analysis and cybersecurity — luckily is in demand in the private sector, too, Kilberg says.

Fairfax has the potential to reinvent itself as a center of national and international business, and Fuller is so confident that that is going to happen, that he has the title for a talk he will give later this year all picked out: “Fairfax County: From Company Town to Global Business Center.”
County’s advantages

Fairfax has many well-known lures for private companies.

Superintendent Karen Garza, who was appointed just a year ago, admits that she is dealing with “the greatest financial challenge the school system has ever faced.” She has had to make some painful decisions, such as cutting 731 positions and increasing class sizes. But she is seeking collaborative ways to deal with budgeting realities and has held more than 100 community meetings “to listen and to educate.”

“The reputation of the system is known nationally,” she says. “My goal is to build on that history of excellence.”

Fairfax has still another plus to offer businesses that other jurisdictions can only envy, not duplicate. It has what Fuller calls “extreme connectivity” to the world and to the region.

The county is one of the rulers of cyberspace, with a phenomenal one-third of global Internet traffic moving through its borders. Add to that virtual access, the ability of Washington Dulles International Airport to give business travelers direct service to destinations as far flung as Seoul and Abu Dhabi. Last month, Air China extended Fairfax’s reach to another huge market by initiating direct flights to Beijing. Fuller expects that proximity of Dulles will spur expansion along the Route 7 and Interstate 66 corridors that could account for as much as 40 percent to 45 percent of the growth in the region in coming years.

The county has outstanding regional connectivity, too. With the expansion of the Beltway to 12 lanes in NOVA, it has the best road network in the D.C. metro area, and the expected opening of the first phase of Metro’s Silver Line, with four stations  at Tysons Corner and one in Reston, puts the cherry on that Beltway sundae.

Construction activity
One proof of the importance of connectivity is the construction ongoing at Tysons despite an overall bear market for commercial real estate in NOVA. The fallout from the contraction in government spending has left Fairfax County with 18 million square feet of vacant commercial space. That’s more empty offices than Richmond has in its entire inventory, Gordon says.

Contractor demand for 1.1 million square feet of new office around Fort Belvoir and the Route 1 corridor in southeastern Fairfax, for example, has yet to materialize, with a resultant vacancy rate there of a painful 26.4 percent. In the county overall, the rate is 17.7 percent.

Yet at Tysons, the 526,488-square-foot, 22-story Tysons Tower opened last month, with the professional services firm of Deloitte and the satellite company, Intelstat, already signed up as tenants. The latter is moving its headquarters from the District and bringing more than 400 jobs along with it.

Construction also has resumed on the 476,000-square-foot, 18-story 1775 Tysons Boulevard, slated to open in 2016, and Capital One won approval for a massive complex near the McLean Silver Line stop that eventually will include 3.1 million square feet of office space, several apartment buildings, a hotel, restaurants and retail.

“Metro will be transformative for the market,” says Scott Homa, vice president of mid-Atlantic research for the commercial real estate company Jones Lang LaSalle, which tracks vacancy rates. “Public transit is an important box to check for many tenants.”

Although Tysons still lacks walkability, Homa expects it eventually will come to resemble the Rosslyn-Ballston corridor in Arlington, with self-contained nodes of multi-use development around each Metro stop.

“The demand for the suburban office park is not what it used to be,” he says. Tenants now prefer a walkable model of development, and Reston, the original suburban city, has a vacancy rate of less than 5 percent to prove it. Metro’s new Silver Line station at Wiehle-Reston East will only broaden its appeal.

So, for Fairfax County, 2014 is something of a pivotal year. Obviously, things could be better, but, happily, most observers think they will be soon.

“Our economy has diversified from an overdependence on federal contracting,” Gordon says, and that lays the groundwork for future prosperity. “Still,’ he admits, “it’s good to have the federal government in our backyard.”