Catrina Mullins can picture the scene: A stage, musicians and a grassy lawn. People leaning back in chairs or sitting cross-legged on blankets on the ground, tapping their toes to familiar tunes. Others open windows to listen to the sound from their hotel rooms, which look out onto the lawn.

This is what an outdoor concert at the Sessions Hotel in Bristol could look like — eventually.

Because of the coronavirus pandemic, construction of a music stage was postponed at the boutique hotel, which opened in June 2020, a delay from its originally scheduled March 2020 debut.

However, depending on state COVID-19 restrictions this year, there may not be clearance for such events, she realizes.

Like many people whose livelihood depends on tourism, Mullins is hoping for the best in the midst of a challenging pandemic that isn’t over yet.

“We would love to have our stage up and going where people can gather but still feel safe,” Mullins says. “That’s really important right now.”

It’s no secret that businesses across the world that rely on travelers and tourism dollars still are reeling from the financially crippling 2020. What lies ahead in 2021 for the industry is unknown, but tourism experts and business owners don’t project a return to pre-pandemic bookings and revenues until at least 2022.

Still, some are making plans, albeit cautiously, for a 2021 that has some potential for an upswing.

Linnea Grim, vice president of guest experiences for the Thomas Jefferson Foundation, says she expects 2021 to be a “bridge year” for the private nonprofit organization, which owns and operates Monticello, Jefferson’s historic home in Charlottesville. This year could set the stage for a 2022 rebound, she says.

Though the pandemic forced Monticello to close from March 2020 through June 2020, the organization performed better than it had initially expected. It reopened with strict public health and safety guidelines, capacity caps and new virtual programs to keep visitors connected with Monticello and its grounds. The offerings include live guided tours of the site and a weekly livestream program featuring an actor who portrays Jefferson, as well as other guest scholars discussing historical topics. The 74 livestreams so far have generated nearly 700,000 views, Grim says.

The organization still offers in-person tours of Monticello, but those are self-guided and restricted to small groups. Private, behind-the-scenes tours also are available for groups of five people.

Other outdoor activities, including grounds-only ticketed tours and historical information stations, were a hit with tourists during summer and fall 2020, Grim says.

The winter months drew more people back to Monticello’s digital offerings, and beyond the pandemic, those virtual options may be here to stay, Grim says.

“We are thinking as we move forward, we will continue the digital way of connecting guests with the history of Monticello,” she says, adding that virtual offerings seem to “whet the appetite for people to go places” and make future travel plans.

Meanwhile, after closing for most of the 2020 summer season, popular theme park Busch Gardens Williamsburg reopened for limited capacity, reservation-only events from August 2020 through January 2021. It also opened, by reservation only, on some weekends in February with plans to continue in March. As of early February, it was unclear whether the park would be able to increase its 4,000-person visitor capacity for the spring season, according to Cindy Sarko, Busch Gardens’ spokeswoman.

The Kings Dominion amusement park in Doswell was closed all last summer due to the pandemic, marking the first summer season the park missed in its 45-year history. It reopened briefly for a limited-attendance 2020 holiday season event but does not plan to reopen for the 2021 season until May 22.

As for other tourism-related businesses, hotels still are scrambling to fill guest rooms and make up for a devastating past year.

Statewide, hotel occupancy was down about 49% in 2020, compared with 2019, says Vinod Agarwal, a professor of economics at Old Dominion University and deputy director of the university’s Dragas Center for Economic Analysis and Policy. The center produces reports using data from STR Inc., a CoStar Group division that provides global hospitality market data.

Across the country and in Virginia, hotels located in large metropolitan areas were most impacted by the pandemic because they rely on corporate business, which is largely driven by airline travel, Agarwal says. For example, hotel occupancy in the Washington, D.C., metropolitan area, which includes Northern Virginia, was down 94% in 2020, compared with the prior year.

“Business travel simply went away,” he says, adding that he expects video conferencing, Zoom and other virtual methods for meetings and conventions to stick around for a long time.

“Business travel will not be the same as it used to be,” Agarwal says.

High-end hotels appear to have suffered the most from lack of travelers, because much of their business came from conventions and corporate meetings. Typically, corporate travelers bring more than hotel business to a city. While there, they also spend money on entertainment, sporting events, retail and more. That kind of business is “bread and butter” spending for large metropolitan areas, Agarwal says, adding, “until those things come back, the big markets will continue to suffer.”

McLean-based Hilton Worldwide Holdings is one of many hotel companies that saw significant sales losses during the pandemic. Declining revenue for the first two quarters of 2020 forced the company to lay off 2,100 of its worldwide corporate employees, about 20% of its workforce. It also reported a net income loss of $81 million for the third quarter of 2020.

“Never in Hilton’s 101-year history has our industry faced a global crisis that brings travel to a virtual standstill,” said Christopher Nassetta, president and CEO of Hilton, in a June 2020 statement. Speaking in fall 2020, Nassetta said it could be 2023 until the hospitality industry recovers to pre-pandemic levels.

Revenue also was down at midscale and economy hotels in 2020 but not by as much as the upscale facilities. That’s because some leisure travel has continued, Agarwal says.

“People going on vacations, they decided to go on vacation but not too far,” he says. “They went to smaller, short-driving destinations.”

Other areas of Virginia with big declines in hotel sales and occupancy were Charlottesville and Blacksburg, which rely heavily on out-of-town travelers for football games and other large university events. In 2020, attendance was significantly limited for these events due to COVID-19 stunting travel activity, says Agarwal.

In Williamsburg, hotel occupancy dropped 49% in 2020, compared with 2019, according to the Dragas Center report. The area’s major attractions, including Busch Gardens, Water Country USA and Colonial Williamsburg, closed or had limited capacity due to the pandemic.

“There was not much to do there [for travelers],” Agarwal says.

In the western part of the state, The Omni Homestead Resort in Hot Springs took some drastic measures to make up for lost sales in early 2021. The rural resort, which offers skiing and ice skating in the winter, scaled back its operations and closed for several days each week in January and February. The coronavirus has had a significant impact on the industry, as well as the resort’s customer traffic, specifically harming travel from large business groups, says Lynn Swann, director of marketing and communications for the resort.

“Our priorities are to operate our resort in an efficient, responsible manner to manage our cash flow,” she says. “We made this decision to protect the long-term viability of the resort. We feel like this is the most responsible and least impactful approach given the current challenges.”

In late January, Swann said it was unclear whether the resort would have an altered schedule beyond February.

“We will continue to re-evaluate  our future business levels, and we will try to make decisions accordingly,” she says.

It could be 2023 before the hotel industry returns to some level of normalcy — and that is optimistic, says Eric Terry, president of the Virginia Restaurant, Lodging, & Travel Association. “I think that depends on where you are located,” he says. “If we see enough vaccines getting out there, I think the beach areas should have a good summer [in 2021].”

Like many hotels, the Sessions offers extensive COVID-19 cleaning protocols, which includes eliminating guest room items that could be touched by many people, such as throw pillows, robes, cups and pens. But customers individually can request items from the hotel, Mullins says. “When you get your robe, it comes in a zipped bag,” she says.

Cleanliness now is a bigger part of many hotel marketing campaigns, Agarwal says. “They are no longer talking about pricing or services,” he says. “The focus has shifted to cleanliness and safety and security of the hotels.”

Like hotels, airline travel has seen a major sales slump during the pandemic, and business likely will not rebound until 75% to 90% of the population receives COVID-19 vaccinations, says Rob Britton, a retired airline executive and adjunct professor of marketing at Georgetown University.

At its lowest point last April, airline passenger volume was down 96%, according to Airlines for America, an industry trade group that represents some of the nation’s major airline carriers. Even now, air travel demand is “severely depressed,” and the group projects that passenger volume likely will not return to 2019 levels until at least 2023.

“Right now, every airline is in a race against the return of demand — how quickly will demand return versus how soon … they run out of cash,” Britton says, explaining that the costs of certain fixed expenses, such as airport rental space for aircraft, are causing the greatest stress for airlines.

“Nowhere in the [country] is there an airline making money,” he says.

Even so, leisure airline travel may return faster than business air travel, because there is strong pent-up demand, particularly among some younger adult populations who may not be as concerned about contracting COVID-19, Britton says.

Despite the challenges, the pandemic has created opportunities for some tourism and retail-related businesses to explore new sales concepts.

Gary Cohen, executive vice president of Maryland-based Glory Days Grill, a full-service restaurant chain with locations in Virginia and five other states, saw the huge demand for food delivery during the pandemic, and he decided to capitalize on it.

So far, it has generated additional revenue, and it required a very small investment compared with opening a new full-service restaurant. Plus, Cohen has been able to keep many of his staff employed with this new food service concept.

“From a business perspective, it’s about return on investment,” Cohen says. 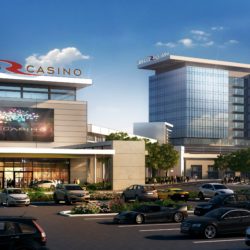 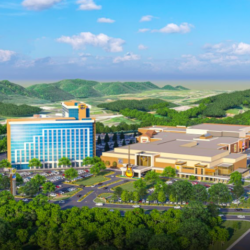 Payout on a dream 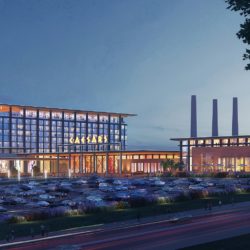 A jackpot for Danville?

Casino set to open in 2023 on former mill property