‘Bingo won’t do it anymore’

Facilities’ amenities multiply in a fierce competition for retirees

Rich Brewer says his company’s business is a lot different from the one many Virginians may think it is.

The president and CEO of Charlottesville-based Commonwealth Assisted Living (CAL) oversees 22 senior housing communities across the state, providing families with a full range of housing and care options, from independent living and in-home care to assisted-living and memory and dementia care. “This is not a health-care business but a hospitality business,” he says.

Like many independent-living communities around the commonwealth and the nation, Heritage Commons offers amenities and services that were once considered luxurious but are now fairly commonplace. At the Williamsburg facility, they include an on-site hair salon and fitness center, a club room, multiple lounges, 24-hour concierge services, daily recreation and educational activities, shuttle transportation services and meals prepared by highly trained chefs.

“It’s not like it was even 10 years ago,” says Brewer, who has more than two decades of experience in senior housing. “We’re always looking for new ways to engage our residents in both independent living and assisted living … Bingo won’t do it anymore.”

Ken Newell, the founder and CEO of Richmond-based Manorhouse Assisted Living and Memory Care, confirms that the sales environment for independent living is much tougher than it’s ever been in his 30-year career. 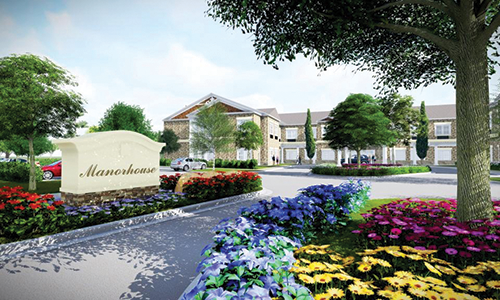 In December, Manorhouse broke ground on what will be a $30 million campus in western Henrico County offering independent-living cottages, single-family homes and 91 assisted-living and memory-care apartments. It’s scheduled to open in 2017.

“Our customers are two-fold,” Newell explains. “One group is frail and in their 80s, with large segments of it dementia-related, Alzheimer’s-related. The other is the people making the decisions for this group, their baby-boomer children now in their 50s and 60s. They are the ones paying the bills … They are much more educated [than the children of seniors] of 10 to 20 years ago. They have done much more research [into senior living options] and ask much more sophisticated questions. Their decisions are much more driven by the level of care and service they want for their parents. They also want more living space. They also want lots and lots of special activities and programs.”

“We have different activities for each population,” he says. “People want to be on the go. They want more things to choose from every day. They can go to the pub, or the bistro, to therapy, or some outdoor space, or they can go visit the farm to help pick vegetables that we use in our farm-to-table menu.”

For companies more comfortable and experienced in assisted living and memory care, the foray into independent living is part of a long-term strategy.

The idea, says Jim Bonnell, chief operating officer at Manorhouse, is to attract seniors first to well-appointed independent-living units and then offer these same tenants and their families the more acute medical care, dementia care and even skilled nursing facilities they may need as they age.

“People find value in the opportunity to age-in-place, so they won’t have to make any move when the time comes that they will need assisted living, and later memory care, and then skilled nursing,” says Bonnell. “It helps patients at almost every level (of care) to be familiar with their surroundings, within a single community. It’s very appealing for families as well.”

Not for every company
Senior housing industry executives say that the financial and real estate crisis of 2008-2009 and the ensuing recession all but suffocated demand for new independent-living facilities, while the market for assisted-living and memory-care communities stayed fairly consistent.

For several years, many seniors found they couldn’t follow through on plans to sell their homes at an attractive profit to finance a good portion of their retirement. So they bided their time, waiting until property prices recovered before contemplating selling what for many Americans is their largest financial asset.

Now, with mortgage rates still hovering around historic lows and the U.S. economy and real estate prices on the rise, more and more seniors are selling and making the move to independent-living communities.
In addition to using luxurious amenities and a wide variety of activities to help attract new tenants to their properties, senior housing companies have also made it easier financially for retirees to afford independent-living communities.

For example, many communities have abandoned the decades-old practice of requiring tenants to pay five- and six-figure, nonrefundable “buy-in” fees. Others offer apartments and town houses on short-term leases at modest monthly rents.

“Our model is not buy-in. It’s rental, so there’s no large buy-in fee, and we don’t have long-term leases,” says Russell. “The previous generation wanted to own a home, rather than lease; for this generation leasing is not a problem.”

To be sure, not all senior housing companies in Virginia are anxious to enter the independent-living marketplace. Some are wary of its profit potential.

“We have not gotten into independent living,” says Rich Williams, the senior vice president in charge of senior-living housing at HHHunt Inc., a real estate developer with headquarters offices in Blacksburg, Richmond and Raleigh, N.C.

“We’re trying to research where that segment is headed in the next five to 10 years,” he says.

Historically, HHHunt’s senior-living division has focused on providing assisted living and memory care at the nearly two dozen senior-living communities it owns and operates under the Spring Arbor brand in Maryland, North Carolina and Virginia.

To meet rising demand from the growing number of retirees and patients in need of more acute care, Williams says, “we are definitely committed to growth, but a controlled growth,” adding a couple of new communities per year during the next five years.

HHHunt has discovered that assisted-living and memory-care facilities are “a little more secure and much more consistent” from a revenue standpoint, Williams says.

“The growth in the industry is in the memory-care area,” he says.  “In the last two to three years there has been a pretty significant increase.”

Williams is leery of the changing economics of the independent-living sector, in which some companies offer almost endless lists of high-end amenities in an effort to attract tenants.

“I’m a little skeptical that providers can deliver what their advertisements say they can. They are going to have to charge for it,” says Williams. “A lot of providers do a pretty good job with that. On the other hand, some providers don’t operate that way.”