When online retail giant Amazon.com opened two fulfillment centers in Chesterfield and Dinwiddie counties last fall, it wasn’t just a big deal for Central Virginia but for the entire state. The two projects would bring nearly 1,500 new jobs to Virginia, the largest job announcement in the commonwealth since 2004.

For Chesterfield, where Amazon was creating more than 1,000 jobs, it was one of the biggest job announcements in the county’s history. In Dinwiddie County, the fulfillment center was creating 390 jobs — the most jobs produced in the county in more than 14 years. “In a time when the economy has been so challenged, we are very happy that happened for our communities,” says Renee Chapline, executive director of Virginia’s Gateway Region, an economic development entity that includes the locations of Amazon’s two fulfillment centers in Virginia.

Amazon’s developers reviewed 371 sites across the country for their fulfillment centers and narrowed the list to 70. They then started visiting sites and chose Virginia for two of their centers, says Will Davis, Chesterfield’s economic development director.

The e-commerce site was looking for highway accessibility so it could reach the company’s entire shipping market, Davis says. Meadowville Technology Park’s location near interstates 95, 64 and 85 provided that option. There was also a deep labor pool to choose from in the area, Davis says.

When it came time to hire, workers were eager to fill the positions, with more applicants applying in Chesterfield than the number of jobs that Amazon had available, Davis recalls. In Dinwiddie, hiring for the Amazon fulfillment center also went smoothly. At the end of summer, Dinwiddie County and Amazon organized an event to help job applicants without Internet access with the company’s online application process, says Morgan Ingram, Dinwiddie County’s economic development manager.

While the number of jobs and investments was impressive, so was how quickly Amazon’s large fulfillment centers were built.  The facilities were constructed in nine months. “Kind of like giving birth,” Davis says. Giving birth, of course, to bigger than average babies. At 1.1 million square feet, each center equals about 25 acres. The Chesterfield facility handles smaller items, while the Dinwiddie center ships out larger items. The first items shipped? A pair of over-prescription shooting glasses from Chesterfield and a crock pot from Dinwiddie.

Ingram says the project wouldn’t have been possible without the Tobacco Indemnification and Community Revitalization Commission, which promotes economic growth and development in former tobacco-dependent communities. The commission approved $850,000 in funds for Dinwiddie’s Amazon facility. The Governor’s Opportunity Fund also helped both counties, approving $3.5 million in grants for the project.

Of course, no big announcement comes without a little controversy. The online retailer originally wouldn’t have paid state sales tax on products sold in Virginia that brick-and-mortar stores in the state were required to pay.
“What is happening in America today is brick-and-mortar, mom-and-pop stores are going out of business because of unfair trade practices in the country,” says Michael Caniglia, owner of Vera’s Fine Jewelers in Midlothian and member of the Alliance for Main Street Fairness, a national organization that fights the sales tax loophole available to online retailers. “The legislation is making it harder and harder for a small business to survive and what we are trying to do now is close one of the major loopholes that allows small businesses like ourselves to compete on a level playing field.”

A bill passed last year by the Virginia General Assembly will require the online retailer to pay sales tax starting this fall. The law requires retailers with a physical presence in Virginia to pay the tax.
“We believe they had nexus before those two establishments, but that further brought the point home that they did and, therefore, they should be collecting the sales and use tax like other retailers in the state,” says Laurie Aldrich, president of the Virginia Retail Merchants Association.

Since Amazon’s 1.1 million square-foot fulfillment center is taking up most of the space at the Dinwiddie Commerce Park, Ingram says, the county is looking to develop other sites to attract more business prospects. Amazon’s move to Dinwiddie also has increased interest in the area by other companies.  “We have had a lot more inquiries since Amazon has been there,” Ingram says. 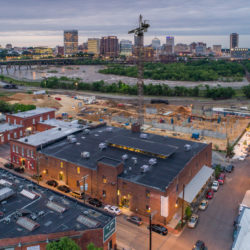