As one of only a few U.S. medical schools established by a grass-roots effort, EVMS owes its existence to the people of Hampton Roads. In the mid-1960s, community leaders, concerned about the shortage of physicians and the lack of specialized health care in Southeastern Virginia, raised money and lobbied the General Assembly for support in creating a medical school in the region.

EVMS opened in 1973 with 28 students and a mission to address health issues affecting the local population. Today, the school has 1,180 students — 594 in the medical school and 586 in the School of Health Professions.  EVMS also hosts approximately 350 health professionals in 39 residency, fellowship and internship programs.

“But for the creation of EVMS, the quality of medical delivery in Hampton Roads wouldn’t be what it is today,” says Dr. Richard V. Homan, the school’s president, provost and dean. “We were created by community members to serve the community at a time when the need for the health-care workforce was extraordinarily acute, and we have a huge impact in training the next generation of health-care professionals.”

About 150 medical students receive medical degrees from EVMS each year, and many remain in Hampton Roads to perform their residencies and pursue their careers. More than 2,300 Hampton Roads physicians were trained at EVMS, while 75 percent of the region’s physician assistants, surgical assistants and clinical psychologists also are graduates of the school. About 3,500 EVMS alumni practice medicine in Virginia.

Doesn’t own a hospital
Unlike public medical schools in Virginia, EVMS is not affiliated with an undergraduate institution and it does not own a hospital. Instead, the school has working relationships with health-care facilities across the region, as well as teaching affiliations with about 150 private medical practices and 10 clinical facilities. The EVMS Medical Group, which includes 150 physicians at 29 offices in Hampton Roads, sees more than 1,500 patients each day. 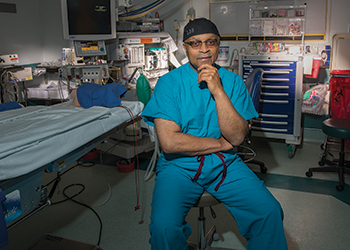 EVMS’ research, while leading to breakthroughs that impact people around the world, is rooted in Southeastern Virginia. More than 100 of the school’s 400 faculty members pursue therapies and treatments for diseases that occur at high rates in Hampton Roads, including diabetes, obesity and cancer. Many have received international acclaim. In October, Dr. L.D. Britt, a 30-year faculty member, was elected to the National Academy of Medicine, a panel of physicians that advises federal officials and the nation on health issues. Britt, a Suffolk native who heads EVMS’ surgery department, is the first African-American in the country to fill an endowed chair in surgery.

This fall the school unveiled its CareForward Curriculum, which emphasizes patient safety and cost-conscious care, while continuing EVMS’ focus on community service. Homan describes it as a more contemporary, student-centered instructional approach. “Today’s students learn as groups and use more technology,” he notes. “This provides an opportunity for them to integrate information in ways that are relevant to taking care of patients.”

Students begin serving the community within days of starting class each August. During community impact day, they clean classrooms and pack backpacks with school supplies at a Norfolk elementary school located in one of the poorest neighborhoods in the U.S. “Our students are immediately exposed to one of the most vulnerable communities that we’re trying to save,” says Dr. Cynthia Romero, director of the M. Foscue Brock Institute for Community and Global Health. “It helps them become community oriented and learn to recognize all the social determinants of health beyond health-care delivery, including housing, income and education.”

Established in 2012 with a $3 million gift from Dollar Tree Chairman Macon Brock and his wife, Joan, the Brock Institute takes medical students outside of the classroom and lab and into the community. With EVMS’ Office of Education, the institute has launched a service-learning curriculum, a four-year program in which students select a community service track, such as teaching CPR, working with older adults, learning to communicate with patients who speak primarily Spanish and increasing awareness of stroke symptoms.  “All medical students participate in the service learning program,” Romero adds. “EVMS helps align and introduce them to so many more health opportunities that may pique their interests.”

A 1993 EVMS graduate, Romero returned to her alma mater after serving as Virginia state health commissioner, a job she says opened her eyes to the region’s health issues — including infant mortality rates, breast cancer deaths and sexually transmitted diseases — and  disparities in health care.  “When I saw such significant health-care gaps, I wanted to bring what I had learned at the state level back here to Hampton Roads,” she says.

School health center
To close some of those gaps, EVMS joined forces with Norfolk Public Schools, the city of Norfolk, United for Children and the United Way of South Hampton Roads to operate a student health center at Norfolk’s Booker T. Washington High School. Funded by a grant from Optima Health, the center is the first of its kind in the region. “It helps address health-care needs so students can stay in school,” Romero says. “This type of connection is a signature characteristic and part of the DNA at EVMS to be so heavily involved in the community.”

EVMS’ community involvement extends to the region’s workforce, augmented in large part by the School of Health Professions. In response to workforce needs, the school developed 10 new programs during the past decade. Health-care workers can attain advanced degrees in 20 programs such as art therapy, public health, physician’s assistant and clinical psychology.

Next year, the school plans to offer a doctorate in health sciences and a master’s degree in health-care delivery sciences.   “We will continue to grow in health professions to meet the market’s needs,” says C. Donald Combs, vice president and dean of the School of Health Professions.  “We look at what capabilities are needed in the workforce and how we can design a program to meet those needs.”

Endocrinologists treat patients at the EVMS Strelitz Diabetes Center and through Sentara Norfolk General Hospital’s diabetes and endocrinology program, which U.S. News & World Report recently ranked 24th among the nation’s top 50 hospital-based programs. “In large measure, that’s as a result of the Strelitz Diabetes Center,” Homan says. “We’re developing new medicines and theories about the cause of Type I diabetes. Those things lead to improvements in diabetes care not just in Hampton Roads but in the nation and around the world.”

Hampton Roads has one of the state’s highest rates of diabetes, particularly in Portsmouth and western Tidewater, notes Dr. Jerry Nadler, who holds the Harry H. Mansbach endowed chair in internal medicine and is vice dean of research. Nadler’s research has established a link be­­tween diabetes and heart, kidney and nerve damage. “Hampton Roads is a large population center with a lot of diabetes and metabolic disease and related complications,” he says. “EVMS is the only academic center in the region training future endocrinologists.”

Named Virginia’s Outstanding Scientist for 2016, Nadler came to EVMS in 2008 after serving as the chair of endocrinology and metabolism in the University of Virginia School of Medicine. “There’s a tremendous opportunity to develop research here, and there are a lot of opportunities to really make an impact,” he says.

Using health data
Nadler and other EVMS researchers are excited about the impact data mined through the new EVMS Sentara Healthcare Analytics and Delivery Science Institute will have on local medical care. Launched last January, the institute builds on Sentara’s patient data repositories to help address health disparities in Hampton Roads. “Sentara and EVMS are working together to pull data from electronic records and understand the best treatments,” Nadler says. “It’s a very exciting opportunity to not only do research on that data but to have the next generation of students use the data to improve health.”

EVMS and Sentara also are developing a biorepository. “It will be a bank of centralized specimens with de-identified personal data to discover new biomarkers for different diseases,” Nadler explains. “We’d like to make this a state resource and link it to other universities in Virginia. Wonderful institutions and health systems are made stronger when we work together.”

In addition to working with Sentara, EVMS has formed relationships with other area hospitals, the military, and colleges and universities. EVMS formed the National Center for Collaboration in Modeling and Simulation with ODU in 2001, and in 2014, launched a joint MD-MBA degree with the College of William and Mary to give future doctors insight into finance and public policy. “It’s important for physicians to understand finances because many will be leaders of health systems in the future,” Homan says.

EVMS teamed up with ODU to offer a master’s of public health and with both ODU and Norfolk State University on a doctoral program in psychology. “Independence has provided opportunities for us to be partners with many institutions,” Homan notes. “We want to be good partners with the academic institutions in the region.”

The Watson collaborative will complement EVMS’ research on the automation of ultrasound examinations. “The ultrasound research we are doing in maternal-fetal medicine is among the most advanced in the world,” notes Dr. Alfred Abuhamad, EVMS’ chair of obstetrics and gynecology and an internationally recognized expert in ultrasound.  Three years ago, EVMS became one of the first U.S. medical schools to completely incorporate ultrasound into its curriculum.

Just one more sign that as the school approaches its 50th anniversary, it will continue to grow and innovate, especially when it comes to meeting Hampton Roads’ health-care needs.  “We’re looking to continue to identify ways to meet the community’s needs,” Homan says. “It’s a very exciting time here at EVMS.”