Field narrowed to two options: Urban One and The Cordish Cos.

The Live! Casino & Hotel proposal by Baltimore-based The Cordish Cos. and ONE Casino and Resort, proposed by Silver Spring, Maryland-based Urban One, are the only two options now being considered by an evaluation panel named by the city. According to a spokesperson for Urban One, the two finalists were allowed to enhance their proposals, and members of Richmond’s selection committee will be making site visits soon.

“We appreciate Bally’s interest to develop a resort casino project in Richmond,” Leonard Sledge, director of the city’s Department of Economic Development, said in a statement. “The evaluation panel is no longer considering the Bally’s project or the Parkway Crossings site for a resort casino due to concerns about site access, environmental factors and required approvals from non-city entities that may not be granted or extend the project timeline. We also appreciate the many Richmond citizens who have shared their thoughts throughout this process.”

Bally’s Corp. President and CEO George Papanier said in a statement Wednesday, “We are disappointed and surprised in the evaluation panel’s decision. We are the best operator to partner with the city on this endeavor and we provided the largest financial package with the most economic benefit to [Richmond] residents and business owners. We were deeply committed to this project, as well as to becoming a responsible neighbor and member of the Richmond community. Should the city reconsider its decision, we would be pleased to reengage.”

Papanier added that Rhode Island-based Bally’s still plans to offer its online sports-betting platform in the state, after it was recently awarded a temporary permit in mid-March. Virginia legalized sports wagering in January, and in February, Virginians bet $265 million on sporting events with five licensed operators.

The city recently concluded a series of virtual public meetings and accepted public comments about what is the state’s only undecided casino project under current law. Many residents around the proposed Bally’s location in Richmond’s Stratford Hills neighborhood near the Chippenham and Powhite parkways objected to the $650 million, 1.6 million-square-foot casino with sportsbook, performance space, a hotel and dining and retail outlets on a 61-acre parcel of land. The proposal also included a $100 million one-time payment to the city. Opponents pointed to traffic and crime concerns, even holding a public protest in recent weeks.

However, when the Bally’s team tried to move its proposed location, city officials turned down the request, noting that the location was part of the request for proposals last year.

Still in the running:

The Live! casino also has run into neighborhood resistance, citing many of the same concerns as neighbors of the Bally’s site. Urban One’s plan has seen less pushback, however.

Richmond is the last of five cities in Virginia to consider a commercial casino, and the nine-person advisory panel — including Sledge, two city councilors and other Richmond officials — is expected to make a recommendation in May to Richmond City Council, which is set to vote on the matter by June. If the council approves the casino’s operator and location, voters will have the chance to weigh in by referendum on the November ballot. Voters in Bristol, Danville, Norfolk and Portsmouth overwhelmingly passed casino referendums last year, and four casinos are now in the works across Virginia.

Richmond and Danville were the only two cities to offer a request for proposals, and Richmond originally received six casino plans that fit its specifications. In March, Richmond narrowed the field to three, rejecting projects by the Pamunkey Indian Tribe, Golden Nugget Hotels & Casinos and Wind Creek Hospitality. 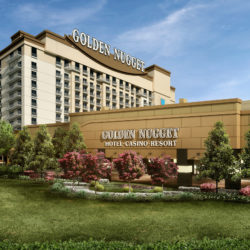