Home News Bringing the world to their doorstep

Bringing the world to their doorstep

The Fralin Biomedical Research Institute at VTC, a Roanoke-based partnership between Carilion Clinic and Virginia Tech, is busy building the future, but it’s making substantial economic contributions right now. In an area where the average income is $44,170, the institute’s average salary is more than $92,000. Most of the people earning those salaries don’t come to Roanoke alone.

“That’s … what I kind of call the shadow economy,” says Michael Friedlander, the institute’s executive director. “We have this second wave of affiliated family members or partners with people that come in, and they often bring a lot to Roanoke. They’ll bring their own businesses or they bring their own expertise that works for another business. That’s, I think, very powerful.”

The Fralin Biomedical Research Institute marries the region’s largest university, Virginia Tech, and the region’s largest employer, Carilion Clinic, a nonprofit health-care provider. Carilion has 13,230 employees working at 225 sites throughout much of Southwest Virginia. It had revenues of $1.8 billion in 2018.

The research institute is also a marriage of the two largest forces driving the Roanoke and New River Valley region’s economy: health care and technology.

That technology takes many forms, including long-distance cybersecurity services, such as 1901 Group’s work for federal agencies, and advanced manufacturing, including the Volvo truck assembly plant in Dublin. 1901 Group plans to break ground Aug. 14 on a 44,000-square-foot building in Virginia Tech’s Corporate Research Center that will house nearly 600 new employees by 2021. In July, Volvo announced plans to build a 350,000-square-foot building and add nearly 800 employees by 2025.

Meanwhile, the Fralin Biomedical Research Institute is about nine months away from the scheduled opening of a new 140,000-square-foot building where about 400 people will be working by 2027.

It takes a while to find, recruit and hire the kind of people the institute needs, according to Friedlander.

“Frankly, it’s about establishing a really exciting cadre of people,” he says. “You don’t want to bring in everybody at once. You want to bring in some people, see how those teams develop, look for the next best fit. You know there’s a learning curve as you go forward … deciding strategically about the next people you want to bring in.”

Each team is different in size and makeup, but the team working with Warren Bickel, whom Friedlander recruited from the University of Arkansas for Health Sciences, is representative.

“He’s one of these senior people, already had several grants and brought a couple of people with him,” Friedlander says. “But then he ended up hiring quite a few.”

Bickel’s team of about 30 includes around a half-dozen people with doctoral degrees, Friedlander says, and they came primarily from out of the area. The bulk of the rest of the team, he says, was hired locally. Graduate students who work on the teams as part of their training also earn some salary — nearly $30,000 each annually in addition to their tuition, according to Friedlander.

‘Off and running’
Sarah Snider did her postdoctoral work on Bickel’s team. Her group developed diagnostic surveys based on behavioral economic theory to predict how likely a person is to relapse into substance use. Now Snider is a senior research associate at the Fralin Biomedical Research Institute and the CEO of BEAM Diagnostics. The company is developing the diagnostic surveys with the help of a $285,000 Small Business Innovation Research/Small Business Technology Transfer federal grant and a $300,000 federal grant from the National Institutes of Health.

BEAM Diagnostics was also part of the second cohort that last fall entered the Roanoke-based Regional Acceleration and Mentoring Program, a technology business accelerator program that is a joint venture of Virginia Western College, Roanoke city and the Roanoke-Blacksburg Technology Council.

“And now they’re off and running,” Friedlander says.

BEAM Diagnostics is one of five companies that have been spun out of the Fralin Biomedical Research Institute so far, but sometimes companies come to the institute. BRAINbox Solutions, for instance, has developed a blood test to determine the severity of brain injuries.

“One of the great needs in the country and worldwide, for that matter, is accurate, precise and repeatable measures that predict if someone truly has a brain injury and how bad the brain injury is and what their prognosis will be,” Friedlander says.

The early results seem good, but BRAINbox needs to validate those results in a much larger study. BRAINbox turned to the institute to help run that larger test.

“The FDA was so impressed with their preliminary data [that] they gave them what’s called breakthrough status, which accelerates the process to allow this to happen very quickly in a nationwide test,” Friedlander says. “That’s pretty exciting because it means the people looking at the data believe there is something there.”

Formula for the future
While the Fralin Biomedical Research Institute and its partners are working to launch medical breakthroughs and the companies that will profit from them, 1901 Group is working to bring more work to the relatively rural New River Valley. 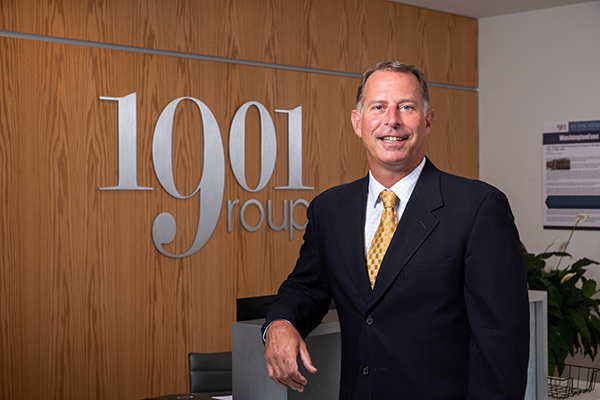 The company’s vision, says Brandon Walsh, senior vice president for partner relations, is to handle routine IT activities remotely in a rural area that has access to talent, a high quality of life and an affordable cost of living. When the formula works, customers receive IT services at a relatively low cost performed by a stable work force, since there are fewer potential poachers to lure employees away.

There are other benefits, too. Blacksburg is close enough to Washington, D.C., for people to travel between the two fairly easily and quickly, but far enough away that if something disrupted operations in D.C., work could continue in Blacksburg.

“I think it is a formula for the future, especially for the public sector,” Walsh says. “You need U.S. citizens on U.S. soil, and I think the rural sourcing is really a win-win.”

1901 Group is even open to hiring people if they don’t have an IT background (one manager is a former welder). But the steady flow of graduates from Virginia Tech, Radford University and New River Community College provides a pipeline of tech talent that fuels the company. 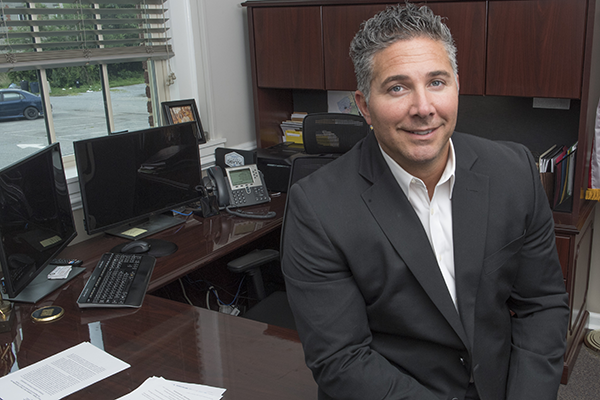 “In our front door is Radford. In our living room is New River Community College, and in our side yard, or our back door, is Virginia Tech,” Sweet says. “I don’t know of another community that is better positioned, with available real estate, with infrastructure and utility … all of these pipelines of talent literally plugged into it, and community willingness to be aggressive and creative in growing and diversifying our economy.”

The largest Volvo truck plant in the world with its 3,500 employees is the dominant factor in Pulaski’s economy, but Sweet wants people to know building trucks isn’t his community’s only skill, or the only business his community is interested in.

“We’re looking at everything,” Sweet says. “We’re the center for advanced manufacturing in Southwest Virginia, but we’re also the center of international business.”

“What we see is a lot of residential property in Pulaski and Pulaski County being renovated or retrofitted for millennial living and young professional living, which is what we consider the foundation to be able to attract and grow our knowledge-based industry sector,” he says. “You call other communities and they may start with something else, but what’s important to us is that we have housing and quality of life for millennials.”

Pulaski is drawing tech entrepreneurs and grad students from Virginia Tech who have found housing much more affordable than in Blacksburg, which is about a 30-minute commute away.

A new ‘tribe’ in town
Young professionals are also drawn to Pulaski by the opportunity to put their own imprint on the town.

“They’re in a community that’s not completely shaped yet,” Sweet says, “so they’re becoming a part of shaping their community. It’s very attractive for millennials because they have a desire, an innate desire, to be contributors, to do something, not just philanthropic, but to do something meaningful and tangible.”

And changes are already happening in Pulaski, where experienced developers and investors are working alongside the new generation.

It will house a New Orleans-style eatery and a virtual reality studio — both of which are ventures being started by a group of nine to 10 local millennial entrepreneurs. Nicknamed “The Tribe,” most of them are in their 20s, and they own more than 30 local properties, about a third of which are appraised at more than $1 million apiece.

Another local company owned by Critchfield, MOVA Technologies, has developed a system that can capture and recycle pollutants from sources such as
fossil fuels and agricultural livestock. Critchfield hopes to open MOVA’s first manufacturing plant somewhere in Southwest Virginia before the end of the year.

Also a force in Pulaski is area businessman David Hagan, who during the last five years has invested more than $9 million in bringing his minor-league baseball franchise to town. That total includes acquiring and redeveloping the town’s historic Calfee Park, where the team, the Pulaski Yankees, plays. Hagan’s business interests range from car dealerships to hotels.

Sweet is interested in hemp, too. It could help the county’s agricultural sector and lead to a new business for the county, industrial-scale hemp processing.

Meanwhile, Sweet says, all the available young talent locating in Pulaski, combined with land that’s practically free by Northern Virginia standards, is beginning to attract serious interest from IT companies.

“It’s as exciting a time as I have seen in Southwest Virginia,” he says, “and I’ve been working in the region for 20 years.”