“When I did my research, I was really impressed with what I saw. It’s a great city,” says Desplaines, who last year became president and CEO of Norfolk Botanical Garden. “I was surprised at how young the city’s population is. I was excited about the vibrant, creative economy and the amazing art scene and fantastic venues.”

Norfolk, which has a population of nearly 250,000, is grabbing the opportunity to transform itself into “a vital 21st-century city,” says George Homewood, the city’s director of planning and community development. 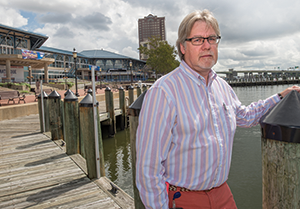 “Our city is driven by the aspirations of our residents and the people that work here,” he says. “We are trying to do a lot of things to become more agile and to respond more quickly.”

Homewood acknowledges that the city still faces many challenges as it remakes itself, including declining federal funding (in a region where defense spending accounts for a sizeable portion of the economy), a relatively high level of poverty, chronic flooding problems and a rising sea level.

Those last two issues are tied to the city’s geography. Norfolk ranks high among U.S. cities most impacted by flooding and sea-level concerns “right behind New Orleans,” says Chuck Rigney, the city’s director of economic development. “We have to pay attention to how we build our city with those principles in mind.”

“This is a huge economic engine for the city,” says Kurt Krause, the facility’s managing director. “There is a neat buzz happening in downtown Norfolk. It’s really been exciting.”

The city’s downtown waterfront also will change with the opening of the $40 million Waterside District, an entertainment complex replacing the Waterside marketplace, a city-owned mall on the Elizabeth River.

The long-awaited Simon Premium Outlets, a 351,000-square-foot outlet mall, also is scheduled to open in 2017 on the site of the former Lake Wright golf course. The $75 million-plus project will include up to 120 stores and is expected to create 800 jobs. “We’ve had a lot of fits and starts related to challenges to the road infrastructure,” says Rigney. “We think we have resolved all of them.”

The city also is studying whether The Gallery at Military Circle mall, a 100-acre property now in foreclosure, can be revitalized as a mixed-use, mixed-income project.

“Norfolk is serious about putting skin in the game,” says Rigney, noting that last year the Norfolk Economic Development Authority purchased for $2.5 million 16 acres owned by J.C. Penney at the mall. The property, which had been assessed at $9 million, includes a 209,000-square-foot building and 1,436 parking spaces. “The city has demonstrated its desire to assist in bringing about a change. This is a very high priority for the city.”

Vibrant Spaces
An effort to bring more retail businesses to downtown Norfolk also is gaining momentum. The Downtown Norfolk Council and the digital marketing firm Grow are the sponsors of Vibrant Spaces, a program designed to increase the number of street-level businesses in the city’s Granby Street area. The program also will help existing downtown businesses that want to refurbish their stores.

“The large number and quality of applications the program received speaks volumes about the interest in downtown as a prime location to support innovative and unique business concepts,” says Mary Miller, president and CEO of Downtown Norfolk Council.

The downtown Norfolk area near the Arts District already is bustling, with new investments in restaurants, apartments and other businesses. A contemporary art gallery, Glass Wheel Studio, is expected to open this fall in a renovated 8,500-square-foot building.

A key element in building Norfolk’s economy is workforce development. The city wants to work with “organizations that already exist and come up with ways to focus on two areas: veterans getting out of the military and the city’s most-distressed citizens that may have dropped out of school or have health issues, for example, and are unable to find employment that would lead to a sustainable, lifetime opportunity,” says Rigney. 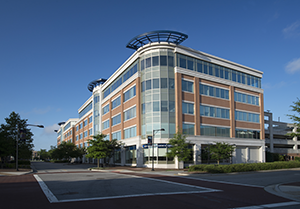 Norfolk-based Old Dominion University plays a major role in producing an educated workforce and supporting local entrepreneurs in the region. A research institution with a student population of 25,000, ODU has an estimated $2.1 billion annual impact on the state’s economy.

The  Business Gateway in ODU’s Innovation Research Park provides assistance through a number of programs, including the Veterans Business Outreach Center, the Women’s Business Center and Launch Hampton Roads, which works with aspiring entrepreneurs. “We have a lot of truly talented people who are exiting the military through retirement,” says ODU President John Broderick, noting that many veterans have ideas for starting businesses. “The university has expertise to help them evolve and generate jobs.”

In collaboration with the city, ODU is opening a downtown incubator this fall.  “This is a big piece of extension of ODU out in the world,” says Martin Kaszubowski, Business Gateway’s executive director. “We will be more aggressive working with early-stage companies and entrepreneurs.”

Last year the university established the Strome Entrepreneur Center, which is  focused on exposing the school’s “students to the world of being an entrepreneur,” says ODU’s COO Dave Harnage. “It is an interdisciplinary-based program. It is not limited to a specific discipline or major. Any student who wants to explore entrepreneurial activities can participate.”

While it is building its business community, Norfolk is attempting to reposition large areas of the city through redevelopment.

For example, the city is developing revitalization strategies for the 100-acre St. Paul’s section of the city where public housing projects now dominate the landscape. The area is frequently subject to flooding.

Health facilities
The city’s economy, along with the well-being of its residents, is bolstered by the area’s health-care facilities. This fall Sentara Norfolk General marks its 30th anniversary as a Level 1 trauma center, one of just five in Virginia. It is also home to the Sentara Neurosciences Institute, which includes the Neuromuscular and Autonomic Center.

A sister facility, Sentara Leigh Hospital, is completing a $126 million project. The five-story East and West towers are now occupied and the atrium entrance is scheduled for completion in 2016.
Both hospitals are owned by Norfolk-based Sentara Healthcare, which has 12 acute-care hospitals in Virginia and North Carolina.

Norfolk also is home to Eastern Virginia Medical School, which tied for 42nd in the nation among schools for primary care, according to a recent ranking by U.S. News and World Report.

Norfolk’s amenities draw visitors and area residents into the city. January’s opening of the $65 million Slover Memorial Library gives Norfolk one of the most technologically advanced public libraries in the country. The library’s features range from its vast collections to a digital media lab. The community also will be able to access high-tech civic meeting rooms and the Sargeant Memorial Local History and Genealogy Collection.

One of the city’s oldest institutions, The Virginia Zoo, attracts locals and tourists, bringing in a half million visitors annually. The zoo features more than 500 animals on more than 53 landscaped acres.

The Norfolk Botanical Garden headed by Desplaines has nearly 10,000 members and draws almost 300,000 visitors a year.

Desplaines believes the LanternAsia exhibit at the botanical garden will attract 100,000 visitors during its two-month run next year.

Chinese artists will live on-site for a month to create the 30 three-dimensional works of art symbolizing scenes from China. The artwork will be illuminated at night.

“This is going to be a nice tie-in to our botanical garden. It’s going to be huge, we think,” says Desplaines.  “We are really excited.”