Charlottesville area has rebounded from recession

Diners, pedestrians, babies in strollers and musicians crowded the Charlottesville downtown pedestrian mall on a recent Friday evening, proof that the city’s economic heart is hardy. 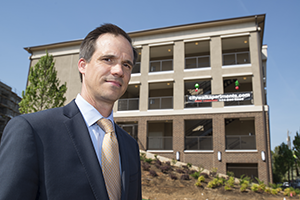 Business vacancies in the eight-block-long mall now sit at about 3 percent, says Chris Engel, the city’s director of economic development. Four or five years ago the vacancy rate was 9 percent. Engel cites the improved economy for the uptick in new businesses. “There are an awful lot of restaurants, and every year we get one or two new ones,” he notes.

The mall’s vitality is a reflection of bustling economic activity happening in and around what Engel calls “the little city that could.” Signs of growth include the opening of two new hotels, the building of three large apartment complexes and continuing construction at the University of Virginia.

One of the newest trends downtown is businesses offering “event space,” Engel says. The businesses cater events such as weddings, receptions and parties. Two have opened recently: The Old Metropolitan Hall on the west end of the mall and The Space on Water Street, which parallels the mall. Another event space business is set to open soon on the east end of the mall.

“We’re seeing a trend,” says Engel. “The wedding industry is really big around here.” Not surprising in a college town of more than 20,000 students.

City residents are migrating to the downtown area in greater numbers. The once-stalled City Walk project planned for construction near Charlottesville’s historic coal tower is back on track, says Engel. The 301-unit apartment complex is about 70 percent complete and should be ready by late fall. The developers also plan to connect Water Street to Carlton Road with a half-mile walking path and hiking trail. That will essentially open up the downtown mall for residents of the complex.

City officials also are looking to redesign the streetscape on West Main. The city wants the area — which links U.Va. to downtown — to have more trees and fewer traffic lights while  better accommodating pedestrians and cyclists. More parking spots also are needed.

Visitors to the city will have new places to stay. A 124-room Marriott Residence Inn is opening on West Main, a few hundred yards from the west end of the mall. “It’s right in the heart of the city,” says Engel. “We’re very excited about this.” A 149-room Homewood Suites — which also will offer extended-stay rooms — is under construction just off Hydraulic Road in the city near the Albemarle County line.

Looming over the downtown mall is the steel skeleton of a building that was supposed to become the Landmark Hotel. Construction started on the 101-room luxury hotel in March 2008 and stopped in early 2009 because of financial problems. The hotel eventually went into bankruptcy and was purchased by Atlanta-based developer John Dewberry for $6.25 million — a far cry from the $23.7 million loan taken out by the previous owner to build it.

Dewberry has indicated to city officials that he will restart construction on the Landmark as soon as he is finished with another project. “We’re optimistic,” says Engel.

City officials can’t enforce a deadline to start or finish the project, but its Planning Commission earlier this year voted to require that Dewberry secure the building and report on its structural integrity.

Martha Jefferson Hospital, a longtime fixture in Charlottesville, moved to Pantops Mountain in Albemarle County in August 2011, but the old hospital has taken on a new life.

Half of the building has been retrofitted for the CFA Institute — a global, nonprofit organization of investment professionals in more than 100 countries. Its 400 employees moved into the buildings in December.

Another business — Hemoshear, a biotech company that employs 25 people — took over two refurbished floors of the old hospital. A total of 40 residential units are also being built at the site. The entire complex is within walking distance of the downtown mall.

U.Va. construction
The Battle Building at the University of Virginia’s Children’s Hospital project is ongoing and is the University Health System’s only current major project, says McGregor McCance, a spokesman for the school. The seven-floor, 200,000-square-foot building will house dozens of pediatric specialties and include outpatient surgery, pediatric outpatient rehabilitation and a teen health center. It is scheduled to open in June.

A building boom continues at the rest of the university. McCance said the $38 million construction of new residence halls on Alderman Road, begun in 2006, will be finished next year.

Of the 10 buildings, Woody and Cauthen dorms were left alone. Kellogg House was completed in 2008. Balz-Dobie, Watson-Webb and Ern Commons were completed in August 2011. Lile-Maupin, Tuttle-Dunnington and Shannon House were completed last August. The final new dorm is scheduled to be completed next summer. The buildings will house more than 1,400 students.

The $50 million ongoing Rotunda renovation should be finished in about two years. The Rotunda roof has been replaced, but major renovations are planned for its interior and exterior. According to McCance, major renovations include repairing the portico roofs, replacing the Dome Room ceiling and upgrading the classrooms and the board of visitors meeting room.

Workers also will install new marble capitals, matching the original Jeffersonian capitals, to replace the deteriorating capitals installed on the north and south sides of the building as part of the reconstruction after the 1895 fire. Those weathered capitals were wrapped in black netting in 2010 to prevent debris from falling.

The north and south porticos will be covered with white-painted copper roofs and the terrace decks will be repaired, McCance says.
The Rotunda closed in May for a two-year period to complete the renovations. 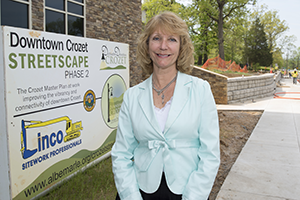 In Albemarle County, the tiny community of Crozet has been a focus for growth and development. Lee Catlin, a spokeswoman for the county, says the most current project is a “streetscape improvement project that will add sidewalks, street trees, benches, crosswalks and other amenities along Crozet Avenue through the heart of downtown.”

The 20,000-square-foot Crozet Library opened last fall. Plans are underway to house a visitors’ center on its first floor to “serve as an outpost for the tourism assets in the larger western Albemarle County region,” Catlin says.

Catlin says major retailers are about to open in the Stonefield shopping center just off U.S. 29 near the city line. Those retailers include Pottery Barn and Williams-Sonoma. Other stores that recently opened include Blue Ridge Mountain Sports and Mincer’s.  Anchor tenants, such as Trader Joe’s, “continue to flourish,” Catlin says.

“Other business sectors are expanding as well, with exciting growth activity within our specialty manufacturing and biotech sectors,” Catlin says. “We are tracking a definite uptick in the number of inquiries and requests for assistance received by our economic development staff in recent months.”

She cited a number of companies that were expanding operations in the county, including CustomInk, Frontline Test Equipment, Lighthouse Instruments, MicroAire Surgical Instruments, Savvy Rest organic mattresses and bedding, and Mikro Industrial Components.

“We are also experiencing continuing energy and growth in our local food and beverage production and processing sector, which is one of the county’s target sectors,” she says. “Starr Hill Brewery just opened an expanded tasting room in response to its growing popularity, and LUMI organic cold press juice recently started operations in the county.”

The Local Food Hub, an aggregator of local produce for wholesale to larger buyers, also has seen sales grow significantly in the last few years.
Catlin says that economic activity “obviously took significant dips in every measure in the 2009 timeframe but we definitely are seeing things moving in the right direction in the last year or so.”

Surrounding counties
In Charlottesville’s other neighboring counties, the biggest economic news came out of Gordonsville in Orange County. Green Applications LLC announced in March that it will invest $9.75 million there to open its first Virginia operation.

The company is one of the “largest printers and distributors of textile merchandise and heat applied graphics on the East Coast,” according to a news release from Governor McAuliffe’s office. The business, expected to open later this year, will employ 323 people.

Water is the big economic news in both Fluvanna and Louisa counties. The two counties — whose designated growth area includes the Zion Crossroads area — have agreed to work together to build a water pipeline from the James River at the town of Columbia through Fluvanna to Zion Crossroads.

Water is needed for any further development in that fast growing area — especially on the Fluvanna side. Louisa has agreed to pay for the pipeline project, which is still in the planning stages.

In general, the Charlottesville area is doing well economically. Timothy Hulbert, president and chief executive of the Charlottesville Regional Chamber of Commerce, says sales tax numbers are up. “Consumer spending has rebounded,” he says, with about $2.3 billion in retail sales in Char­­­lottesville and Albemarle County last year. “That’s just slightly below the all-time record high.”

It’s been a bumpy ride since the real estate bubble popped in 2008, but Hulbert says it’s almost over. “Six years later and we are finally, almost completely back.”