The demand for cybersecurity products is at an all-time high as alarming data breaches continue.

In June, the U.S. Office of Personnel Management (OPM) announced that it had been the target of a cyberattack. At first, federal officials thought the breach affected the records of about 4 million federal employees. FBI Director James Comey later raised that number to 18 million, making it one of the largest breaches of government data in the nation’s history.

No one understands the need for heightened cybersecurity better than Pete Jobse, president and CEO of the Center for Innovative Technology, who also serves as executive chairman of the 2-year-old MACH37 Cyber Accelerator.

Since it began in 2013, the program has had 22 graduates who are now developing products in Virginia. Jobse expects to have six to seven companies participate in the fall session, which begins in September.

“Cyberattacks are a pervasive problem. Cybersecurity is an enormous growth area. It was very apparent to us after about 20 months of research that we had this huge density of cybersecurity expertise in Virginia, but it was untapped,” Jobse says of the idea for the accelerator, which helps information security entrepreneurs and startups ramp up their plans.

Entrepreneurs and startups must apply to MACH37, and acceptance has become increasingly competitive. In each 14-week session — there are two a year — five to eight companies are accepted. About 10 companies apply for each slot. “The number of applicants continues to increase,” Jobse says, noting that accepted companies each receive a $50,000 investment.

The accelerator accepts companies from the United States and foreign countries. “We have applicants from London, Turkey and North Africa,” Jobse says. “We are now recognized globally.”

All of the applicants are thoroughly vetted. If a company is less than stellar, “we move on,” Jobse says. “There are certainly areas we are leery of right now.”

The intensive program helps businesses evolve their ideas for cybersecurity products by “vetting it with corporations and organizations that would likely buy it and also vetting it with investors who would invest in it. In addition we link the companies to cybersecurity leaders who serve as mentors,” Jobse says.

The Commonwealth of Virginia underwrote the accelerator’s operations for the past two years, but going forward it will be supported by its platinum sponsors, a group of 14 companies that are national leaders in cybersecurity.

“The extent of cybercrime has reached the level that requires industry leaders to pursue all innovative channels to protect private and public assets,” Jobse says. “The platinum sponsor program bridges the innovation and creativity of the startup community with the market presence and growth objectives of industry leaders.”

Jobse says the accelerator was begun with the ambition of making it a destination for the next generation of cybersecurity product companies. “We believe Virginia can be the epicenter of cybersecurity creation,” he says.

CSC to acquire Australian IT firm in $307.9 million deal 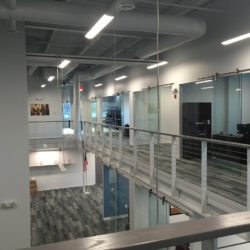 The Reston-based defense contractor will provide IT and cybersecurity support.