Stephen Moegling could have worked from his Richmond home when he took a job last year with Minnesota health-care marketing agency, Hailey Sault.

But like a growing number of remote workers, Moegling decided to join a coworking office space. He pays a monthly fee to share a professional office environment with coworkers from a variety of businesses, ranging from small startups to nonprofits to global companies.

“I really like it because I still have a lot of that engagement with people in an office environment, which I think is just healthy, to have that small talk here and there at the water cooler,” says Moegling, who works out of an office at Gather, a Richmond coworking company with three area locations. “But when it’s time to really get down to work, I can … close the door to my office and do it.”

In recent years, the popularity of coworking spots has soared. The number of coworking spaces globally is expected to increase 16 percent annually through 2022, according to research sponsored by Global Coworking Unconference Conference (GCUC).

The trend also is reflected in Virginia. Chains such as New York-based WeWork and McLean-based MakeOffices offer flexible workspaces with a variety of amenities aimed at “gig economy” freelancers, consultants and independent contractors. Smaller coworking companies also are setting up shop around the state.

$250 to $500 a month
The largest local coworking space in Richmond, Gather was founded in 2014 and has more than 500 members who pay monthly fees ranging from $250 to more than $500 for 24/7 access to the facilities. Some just need an available cubicle; others pay for a dedicated desk or a suite of offices. Internet and utilities are included and members have access to conference rooms at any of the Gather locations.

“Creating an office is its own workload and really [businesses would] much prefer to just be focusing on their core competency,” he says. “They didn’t get into their business to open an office, right? Whereas, that’s what we do. That’s our specialty. So they can focus on running their businesses and not have to worry about setting up an office.” 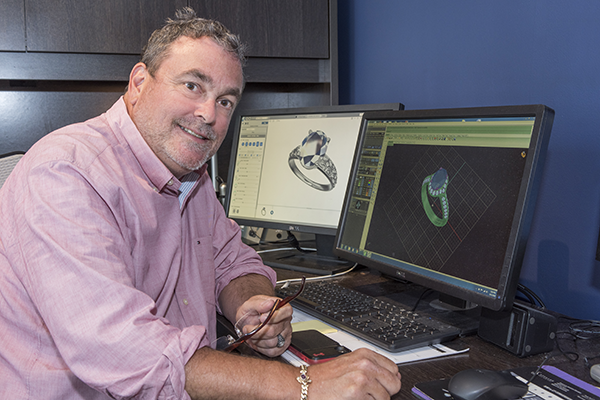 Since it opened in July 2017, Norfolk’s Percolator has opened four coworking spaces serving about 55 member companies, including David Nygaard Jewelers, whose namesake owner decided to close his longtime retail storefront in favor of working out of a Percolator office and seeing clients by appointment only.

“It has hyper-focused my business towards what I do best, which is the custom-design process, and it has lowered my expenses … because I’m not operating a retail store and retail space,” says Nygaard. Most of the foot traffic he had coming into his store was from people who wanted minor repairs or to have jewelry cleaned. In his first year switching to an office, his revenue has been nearly the same as previous years.

The coworking space seeks “to harness the talent that we have right here in every industry from graphic design to art to music to film to wellness,” Poplin says.

“There’s so many people that are a part of the Percolator community and are just reaching out to help each other; it’s been really fun to watch this place grow.”

Working from home can be isolating, says John Dudley, owner of software development firm Industrial Imagination, who manages subcontractors working on projects around the globe. Being around other entrepreneurs at Percolator has sparked his creativity and inspired him.

“It actually inspires me in my own business. When I see, oh, they’ve just launched this, and they’ve just gotten this new client, it kind of makes me feel like I’ve got to keep up the momentum as well,” Dudley says. “If you’re sitting around your house, you’re not going to get any of that. You’re not going to necessarily feel the hot air that’s breathing down your back from potential competitors.”

Diverse backgrounds
Being around a community of people from different business backgrounds and experience levels can provide lots of opportunities for networking and learning, he says, likening it to “taking a master class in entrepreneurship.”

“I just love the diverse community of entrepreneurs [and] established business owners,” says Anastasiya Rogatnik, who runs her foreign-language instruction and translation business Lingo Rocket from a Gather location in Richmond. “If I need legal advice, I can go to a law firm next door. If I need help with my taxes, I can go to an accountant. … [I] just love the feeling of having different businesses literally next door to my office. If I have a question, I don’t even have to go outside of the building. I just have to walk down the hallway and get any assistance that I need.”

Amenities also are a key draw of coworking spaces, ranging from the open-bar, beer-on-tap provided by WeWork in some states to the gym memberships and podcast studio offered by Percolator or the fresh-baked cookies served on Wednesdays at Gather.

In February, Ali Greenberg opened The Broad, a coworking space in Richmond dedicated to building community and providing social experiences and coworking space for women and gender minorities. The Broad eschews desks and dedicated office spaces in favor of communal lounges with a modern design. Its 160 members include entrepreneurs and teleworkers who pay a $150 month-to-month fee, as well as “social” members who pay a reduced $75 month-to-month membership fee, which includes access to The Broad’s numerous perks.

“We do two weekly yoga classes … [and] we have office hours every single Friday with lawyers, accountants [and] personal finance professionals,” Greenberg says. “We get discounts at lots of local women-run businesses, and we put on a lot of our own programs that members all get free access to — everything from business-related stuff, like how to get an intern, to life stuff: travel … health and wellness, politics. It kind of runs the gamut.”

Scaling up or down
Coworking spaces are so popular that some larger landlords are looking at starting coworking businesses themselves in order to lease out their vacant buildings and large office spaces, says Jonathan Koes, a research manager with Cushman & Wakefield|Thalhimer.

There are risks inherent in operating a coworking space, including the up-front expenses for setting up the space. Additionally, relying on individual tenants to pay on a month-by-month basis isn’t as stable or secure as the traditional model of signing one corporate tenant to a long-term, three-year or five-year lease.

Ultimately, though, says Koes, “you’re going to command larger rents and get more dollars per square foot on an individual basis when you’re renting a desk versus an office.”

While the desire for community and opportunities to socialize and network are large components driving the growth of coworking spaces (“massive,” says Poplin), it’s also an affordable way for startups and small businesses to have professional workspaces and scale up (or down) as needed without expensive long-term lease commitments.

“I don’t need a conference room 24 hours a day; I don’t need a kitchen 24 hours a day. I only need fractional use of those spaces. And that’s what coworking allows you to do,” Dudley says. “It just seems to be a perfect model for a 21st-century company.”