After nearly a decade of planning, Richmond-based Dominion Energy Inc. is on the verge of harnessing offshore wind power following the installation this month of two turbines off the coast of Virginia Beach.

Standing approximately 600 feet tall, the 12-megawatt turbines are the cornerstone of Dominion’s $300 million Coastal Virginia Offshore Wind pilot project. Located on a 2,135-acre site, the project is the first offshore wind farm approved by the Bureau of Ocean Energy Management and installed in U.S. federal waters and the second wind farm to be built in the U.S. The utility will test the turbines next month before fully energizing them late this summer. At its peak, they will power 3,000 homes.

Gov. Ralph Northam joined state and local officials, industry representatives and stakeholders Monday for a boat excursion 27 miles off the coast to take an up-close look at the massive turbines. Before embarking on the tour, Northam signed landmark offshore wind legislation during a ceremony in front of the Virginia Aquarium & Marine Science Center in Virginia Beach. He said the legislation will continue to position Virginia as a national leader in offshore wind development as the state builds a new industry with thousands of clean energy jobs.

The legislation establishes a target for Virginia to generate 5,200 megawatts of offshore wind energy by 2034, ensuring projects demonstrate significant economic development for the state, while ensuring healthy competition for the procurement of offshore wind projects that bring diverse companies to Virginia. The bills also create a pathway for project developers to recover expenses wile minimizing costs to utility customers.

Additionally, the governor signed a bill creating Virginia’s first Office of Offshore Wind within the Department of Mines Minerals and Energy (DMME). The new office will oversee state policies in support of offshore wind, work with stakeholders and coordinate economic development opportunities for the offshore wind industry.

“These new laws are the cornerstone of our offshore wind investment,” Northam said. “With this legislative package, Virginia will continue to position itself as the best state in the nation for offshore wind.”

Ørsted, the world’s largest offshore wind developer, partnered with Dominion to build the pilot project on offshore land leased by the Virginia Department of Mines, Minerals and Energy. Earlier this year, Denmark-based Ørsted agreed to lease a portion of the Portsmouth Marine Terminal from the Virginia Port Authority to stage materials and equipment for the project, as well as for its other East coast offshore wind projects. Hayes Framme, Orsted’s government relations and communications manager, praised the state’s legislative focus on offshore wind energy. “In the last six months, Virginia has gone from playing catchup to other states to having one of the most aggressive offshore wind policies in the entire country.”

Dominion will use information gained from the development, installation and operation of the pilot project to build what is planned to be the largest wind farm in North America, erecting 200 turbines in 112,800 acres of federal waters adjacent to the test turbines. Scheduled to be built in three, 880-megawatt phases from 2024 to 2026, the $7.8 billion commercial project will be capable of generating 2,650 megawatts of zero-carbon electricity at peak wind speeds to power 650,000 homes.

The turbines are expected to last 25 years, says Mark Mitchell, Dominion’s vice president of generation construction, and withstand severe storms, including hurricanes. “We looked at every hurricane in the history of this area and calculated what could withstand the wind speed and waves consistent with a Category 5 hurricane.” 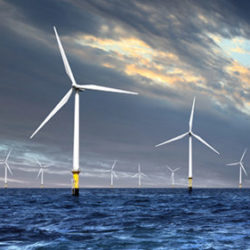 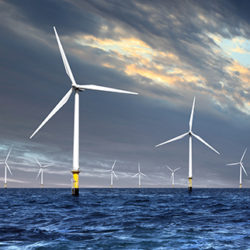 Lease could be worth $13M plus $20M in improvements