Editor's note: This story has been updated

About 100 people turned out Monday to see a huge hole in the ground in downtown Richmond that soon will become the city’s newest office tower and one of its tallest buildings.

Tom Farrell, Dominion’s chairman, president and CEO, said during a groundbreaking ceremony that the 417-foot-tall, 20-story building, set on a high elevation, would rise above other city skyscrapers. It would be the second tallest building, behind the James Monroe state building, which is 449 feet tall.

The one million-square-foot building at 111 S. 6th Street is expected to be ready by late 2018 and will house 5,000 square feet of retail space and more than 1,000 Dominion employees.  It’s located at what was the site for Richmond Plaza, a six-story building that Farrell said,  “stood out as the ugliest building in Richmond.” It was demolished to make way for the new project, with 75 percent of the building’s materials, including the concrete and steel, being recycled, according to Farrell.

Construction already is underway on the new tower, with a giant crane on the site a reminder of the ongoing work. Mark Hourigan, president of Richmond-based Hourigan Construction, the building’s general contractor, said the amount of glass that will be used to wrap the building’s exterior — about 350,000 square feet — could stretch from downtown all the way to Short Pump.

The building also will have a one-acre rooftop green terrace, 28 charging stations for electric cars and bike racks. “It’s going to be an energy- efficient marvel,” said Hourigan, who plans to seek LEED certification for the project.  “A year from today, we will be topping out the steel,” he predicted.

Hourigan Construction and its joint venture partner, Chicago-based Clayco, are heading up a design/build team that includes local and national players. Clayco served as the developer, along with the city, on Gateway Plaza, a 18-story office tower on Cary Street that celebrated its grand opening in 2015.

That 307,000-square foot project had 135,000 square feet of exterior glass and cost about $120 million.  Dominion officials said they did not have a firm figure yet for their new building, but it appears that it will eclipse the amount spent on Gateway because it’s a much larger project.

Dominion’s new tower is across the street from the company’s existing 21-story office tower, One James River Plaza at 701 East Cary St. Company officials are taking a hard look at that building to see if it should be refurbished or demolished with a new building erected in its place.

Currently, Dominion has about 2,500 downtown employees in several buildings: A three building corporate headquarters complex on Tredegar St., One James River Plaza, the 20-story Eighth and Main Building and a couple of buildings on Grayland Ave.

Farrell said the energy company remains committed to downtown Richmond as a corporate location. “We did not ask for any tax abatement to get this building going,” he said.

The new tower is expected to generate millions in new tax revenues for the city and will employ 450 workers during the construction.  It also will give Dominion space to grow, Farrell said.

Richmond Mayor Dwight Jones also spoke at the groundbreaking and thanked Dominion for being part of the city’s resurgence. “Dominion has been a co-cheerleader,” he said, by sponsoring events ranging from an annual Christmas parade to the city’s recent UCI World bike races, which provided the city with international marketing opportunities. 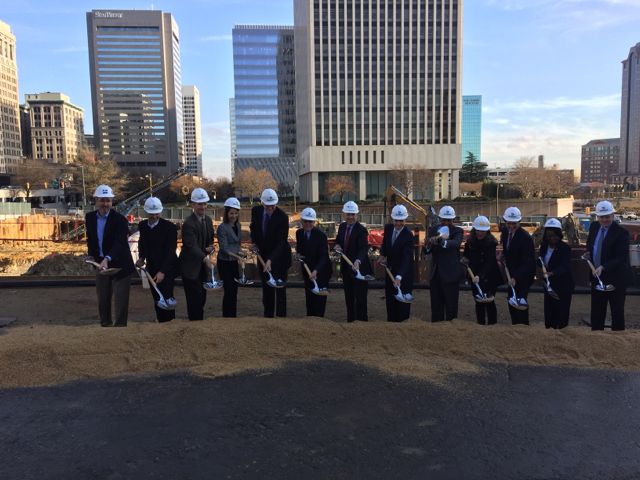 Dominion executives and other officials at the groundbreaking ceremony. | Paula C. Squires Photo

Construction starts on retail building at The Shoppes at Reynolds Crossing