New law paves way for investments in the grid and renewable energy, but does it provide enough oversight?

It’s a new day in Virginia for electric utility reform.  On July 1, an extensive overhaul of the state’s utility regulations will repeal a rate freeze adopted in 2015 that allowed Virginia’s two largest monopoly utilities to accumulate millions in excess profits.

Senate Bill 966, also known as the Grid Transformation and Security Act, will reset how Virginia governs electric utilities. The law will impact utility bills for many residents and businesses.

Championed by Richmond-based Dominion Energy, the state’s largest utility and top corporate political donor, the legislation was one of the most ambitious initiatives of the 2018 General Assembly session. It drew bipartisan support and bipartisan criticism in a lengthy and contentious debate.

Dominion proved it could still flex its political muscle despite growing pushback from a growing number of Democratic politicians who say they won’t accept campaign contributions from the energy company. Meanwhile, Del. David Toscano, D-Charlottesville, the House minority leader, showed some muscle of his own. He overcame one of the biggest objections to the law by sponsoring a successful amendment to prevent utilities from the so-called “double dip:” the potential to charge customers twice for what could be billions of dollars in grid and renewable investments.

Gov. Ralph Northam endorsed the regulatory reform early on and hired a mediator to hammer out a compromise acceptable to utilities, business, consumer and environmental groups.  When the General Assembly adjourned on March 10, the governor praised legislators for working together “to end the freeze on energy utility rates and significantly improve legislation to return money to consumers, invest in a clean energy future and modernize our electrical grid.”

Proponents say SB 966 positions Virginia for the future. It allows Dominion and Appalachian Power (APCO) to expand their use of renewable sources, including 5,000 new megawatts of solar and wind energy. It also requires utilities to make $1.1 billion in investments for energy efficiency and low-income energy assistance over the next 10 years.

“We’re accelerating renewables, hardening the grid for environmental and cyber threats and modernizing our grid … When you look at the type of businesses that we are trying to attract in Virginia — the high-tech companies and companies like Mars and Nestlé — they’re looking for exactly what you see in Senate Bill 966,” says state Sen. Frank W. Wagner (R-Virginia Beach), the chief patron on the bill.

Customer refunds
The law requires Dominion to issue $200 million in refunds to customers who were overcharged during the rate freeze, while APCO would have to issue $10 million. According to the SCC, customers should see a one-time credit when Dominion issues $133 million in refunds in bills that will be sent in July and August, with the remaining $67 million credited in the January and February 2019 billing cycle. APCO probably will spread out its refund over a longer period of time, ending in October 2018.

The utilities also would pass along annual tax savings from the federal corporate tax cut recently approved by Congress. This comes to $125 million for Dominion and $50 million for APCO.

The Virginia law also restores oversight of utilities’ earnings and base rates to the State Corporation Commission (SCC).  That oversight was eliminated in a 2015 Wagner-sponsored bill designed to freeze electric rates until 2022. The premise of the legislation was that a freeze would help utilities stabilize rates while meeting new and unpredictable costs expected from tougher environmental regulations under the Obama administration’s Clean Power Plan. Under President Donald Trump, that plan has been dismantled.

According to the SCC, Dominion, which serves about 2.5 million customers, overearned $426 million in 2016 under the freeze.

Now that the freeze is about to be lifted, opponents question whether the SCC’s oversight will be fully restored. SB 966 includes many projects deemed in “the public interest,” including ones the SCC said in the past either were not needed or would incur an unreasonable cost, such as a bid by Dominion to put some distribution lines underground.

In that case, Ken Schrad, the SCC’s director of information resources, says that evidence in a hearing showed Dominion wanted to invest $2 billion in underground investments over 10 years at a cost to ratepayers of $6 billion. The improvements would be limited to troubled lines, “typically the ones that are last to come back online when you’ve got a major storm outage,” Schrad explains.

While the ultimate cost to all Dominion ratepayers was $6 billion, only 6 percent of its customers would directly benefit from the project, Schrad says.

“The commission in its order [in 2015] said no other utility in the United States has proposed such an aggressive program. So the commission told the company to come back with something a little bit smaller in scale and let’s see how it works, and the company did. We approved it for the first year, and they came back for a second year and they spent more than the commission was willing to allow them to recover.”

Now that the strategic underground program has been deemed in the public interest in the new law, the commission could no longer apply its standard of: “Is this needed and is the cost to taxpayers reasonable?” says Schrad.

Virginia Attorney General Mark Herring and the SCC’s Deputy General Counsel Arlen Bolstad also have questioned whether the General Assembly’s new law provides enough protection to consumers. “Put simply, SB 966’s predetermining ‘in the public interest’ language puts limits on the SCC’s authority to ensure that customers do not overpay for utility projects if and when there are less costly alternatives available,” Bolstad said in a letter to Toscano.

Dominion officials disagree. “By saying certain projects are in the public interest, the General Assembly is laying out energy policy in Virginia, as is their duty. The SCC still has the ability to deny those projects if they feel they aren’t in the interest of our customers,” says Rayhan Daudani, a company spokesman.

According to Daudani, “The SCC will have oversight of grid transformation projects before, during and after the investments. Dominion Energy can’t spend one penny on grid modernization until the SCC deems the investments reasonable and prudent. The SCC will also have opportunities during and after the projects to review the expenses to ensure it was spent according to their authorization.”

Some SCC officials remain skeptical.  While the overhaul provides a structure to move Virginia forward, it also creates what has been called a “reinvestment model,” allowing Dominion and APCO to offset profits above their authorized rate of return by investing in those projects deemed as “in the public interest.”

Schrad notes that, under the new law, utilities will be subject to financial reviews every three years, instead of every two years, the timeframe in place before the 2015 rate freeze.

Under the prior system, if a utility overearned in a single biennial review puneriod, then the amount of money collected from ratepayers over a certain threshold was returned to them. Basically, the company could keep 30 percent, and 70 percent was returned to ratepayers, Schrad says. 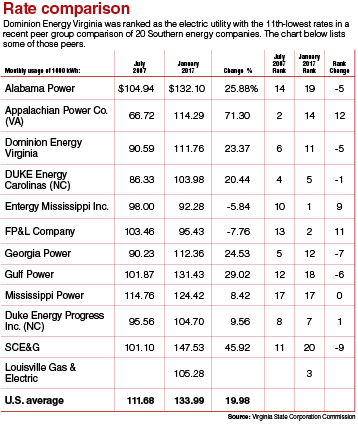 Now instead of returning money to ratepayers, “the utility has the option to reinvest that money into certain qualifying projects — solar, wind generation, grid modernization programs. Ratepayers would ultimately be paying for all of these projects anyway. But instead of any refund coming back to customers, that money would instead be used to start paying for these projects,” says Schrad.

In a report to the governor and General Assembly in September, the SCC said that Dominion Energy Virginia’s return on equity (ROE) for generation and distribution for the combined years of 2015 and 2016 — when the freeze was in effect— was 11.94 percent, above the 10 percent approved by the SCC during its last biennial review of the company. APCO’s return was 11.09 percent for that same time.

In the meantime, Dominion’s rates within its peer group of other Southeastern utilities have become less competitive, according to the SCC.

Dominion Energy Virginia’s annualized residential rates, based on a customer using 1,000 kilowatts per month, was 11th in a recent SCC ranking of 20 peer companies in terms of least expensive rates. The company ranked sixth in 2007. Dominion’s rate was $111.76 in January 2017 compared with $90.59 in July 2007, an increase of 23.3 percent.

Other states are making a big push into solar and modernizing their grids. “If you’re using excess earnings to fund an investment, rather than come in for a rate case to make the investment, you’re getting to the same place, but in a simpler way. Other states have done similar things,” she says. 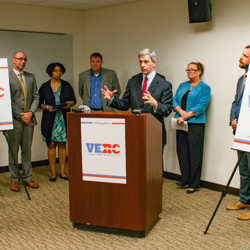