Health systems found themselves at a crossroads in 2020. Their services were in demand more than ever due to the COVID-19 pandemic, but elective surgical procedures and other appointments were postponed — necessitating layoffs and furloughs last spring, including between 200 and 250 Ballad Health employees furloughed in Southwest Virginia during April 2020.

As of early 2021, many Virginia health care employees are back at work, although those in COVID units were burdened by case spikes driven by holiday gatherings. Meanwhile, the rollout of vaccines beginning in December 2020 promised some relief for frontline health care workers who spent most of the past year at high risk for catching the virus.

Although the state now is shifting its focus to vaccinations, testing remains a priority, especially with more contagious virus variants circulating in the U.S. In February, Virginia had reported a handful of cases of variants from the United Kingdom and South Africa.

Aside from the pandemic, the year also saw a continuation of partnerships formed among hospital systems and universities, including the Hampton Roads Biomedical Research Consortium with Sentara Healthcare, Old Dominion University and Eastern Virginia Medical School. Sentara announced in January a $4 million investment in a new public health school to be developed by ODU and Norfolk State University.

Also in Hampton Roads, VCU Health System purchased Riverside Tappahannock Hospital and its related services, and the university sold its majority stake in the Virginia Premier insurance plan to Sentara. And the busy Sentara announced a planned merger with North Carolina’s Cone Health, which would create a larger hospital system with $11.5 billion in combined revenues.

Roanoke-based Carilion Clinic continued its expansion in the region and beyond, including its purchase of Stonewall Jackson Hospital in Lexington, now renamed Carilion Rockbridge Community Hospital. The system continues fundraising for its $100 million cancer center in Roanoke.

The pandemic also ushered in a swift increase in telemedicine, from psychologists’ appointments to surgical consults via Zoom. Carilion received a $1 million grant from the U.S. Department of Agriculture in October 2020 to expand its telehealth expansion services, establishing virtual care centers in Tazewell and Wythe counties and Galax — areas that are affected by poor broadband access.

2020 was also a tough year for physicians with their own practices, in addition to those affiliated with hospital groups. In August 2020, Gov. Ralph Northam announced that the state would create a primary care task force with the Virginia Center for Health Innovation to determine better payment models and necessary infrastructure for practices. In a study released last year by the Richmond-based Larry A. Green Center, 40% of primary care practices reported laying off or furloughing staff due to the pandemic, and 19% temporarily closed.

Virtual appointments — as long as they’re covered by insurance companies — are likely to continue in the future, even when the coronavirus is under control, providers say. In a Doctors.com survey last year, 93% of patients polled say they would be likely to use telemedicine to get prescriptions filled or to learn more about their prescriptions from doctors. 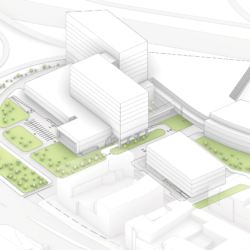 A new landmark for Alexandria

Shuttered mall will give way to Inova hospital project