The Omni Homestead has charmed a succession of generations

Tradition is trending in the tourism industry, but at The Omni Homestead Resort, it never has gone out of style. The venerable resort, ensconced on more than 2,300 acres in Hot Springs, turns 250 years old this year, and it attained that impressive longevity by never abandoning a standard of hospitality that melds luxury and elegance with a homey Southern charm.

Like many of the guests of the Homestead, Channing M. Hall III and his brother, J. Lesslie Hall III, both of Williamsburg, have been regulars for years.  So were their parents and their grandparents. Seeing multiple generations under the one roof is common at the scenic mountain sanctuary.

“The great thing about the Homestead is the constancy of the genteel Virginia hospitality,” says Lesslie Hall. “It is a paragon of grace and gentility.”

“A visitor in 1890 and a visitor today would find the same hospitality,” says his brother, although, admittedly, back then, they wouldn’t have encountered a snow-tubing park or Segway tours or a paintball course, some of the attractions that the Homestead has added to appeal to today’s travelers. “The Homestead is never trendy,” says Channing Hall. “It does, however, adapt.”

In July 2013, the Homestead faced the possibility of having to make a major adaptation when it was bought by Omni Hotels. The resort’s new managing director, David Jurcak, arrived that fall and made establishing the Omni culture at the property his first priority. That culture, he says, strives to equally balance the needs of customers, associates (employees), and owners. “A happy associate makes for happy guests,” Jurcak says.

That philosophy turned out to be a good fit for the Homestead, where guests say they are attracted by the kindness and cordiality of hotel employees as much as by a  fly-fishing stream or the opportunity to take falconry lessons.

Right from the very beginning in 1766, when homesteaders in what would become Bath County helped build the Homestead’s original 18-room wooden lodge, the people of the area have been an intrinsic part of the retreat’s appeal.

Employees such as maître d’ Woody Pettus, a fifth-generation employee who has worked at the Homestead for 55 years, are revered. “Woody is a true Virginia gentleman,” says Channing Hall. 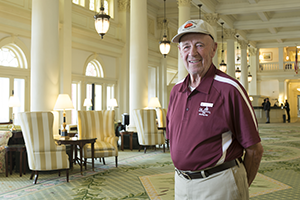 Or Jimmy Cauley, who has logged 65 years at the resort, teaching thousands of visitors — including Charlton Heston — how to improve their shooting. “Giving lessons became a part of me,” he says.

Or Don Ryder, another fifth-generation employee whose wife is a sixth-generation staffer. Ryder, who recently retired, grew up caddying and rose to become director of golf. “I had guests that I taught as kids and then I taught their kids,” he says.

“The local people just show what a great area it is,” says Tim Siviter of Virginia Beach, who first visited the Homestead as a child and began taking his 20-year-old daughter there when she was 4. Along with memories of “killer luncheons on the lawn” and “the biggest Christmas tree you ever saw,” one of Siviter’s most vivid recollections is of the “wine guy with the big key around his neck. He remembered my dad,” he says.

Jurcak, who has been with Omni for 21 years, says that the warm atmosphere at the resort is “unlike what I have seen over my career. My biggest surprise has been the community and how everyone embraces [the Homestead]. It really takes a village.”

It also takes constant maintenance, and the Omni’s immediate focus has been to repair and replace aging electrical, mechanical and plumbing systems. “We’re still trying to get our hands around” a property that includes 73 buildings of varying vintages, Jurcak says.

Among the most precious is the Men’s Bath House at the Jefferson Pools, which will be the centerpiece of a long-term restoration and renovation plan. It is the oldest, still-operating men’s bathhouse in the country. The country’s third president, Thomas Jefferson, took the waters there in 1818, pronouncing them to be “of the first merit.”

With tourists, especially millennials, increasingly in search of what is known in the hospitality industry as “an authentic experience,” it’s hard to beat wriggling your toes in the same mineral springs that a Founding Father enjoyed. As Lynn Swann, director of marketing and communications for the Homestead, points out, “You can’t build instant history.”

That history includes a roster of colorful and notable guests, such as the Duke and Duchess of Windsor, who arrived with three trucks full of luggage and 12 servants and stayed for a month in 1943, and Cornelius Vanderbilt III and his wife, Grace, who not only honeymooned at the wilderness haven in 1896 but returned there for R&R each spring and fall for the next half century. More recently, Richard Gere caused a stir when he and the cast of “Sommersby” stayed at the Homestead during the filming of the 1993 post-Civil War drama.

The resort, not surprisingly, has no shortage of events planned to mark its 250th anniversary, including a different special cake for every day of 2016 (on New Year’s, it was a red velvet).

Each month also will have a theme with special events. In January, most appropriately, the focus was on the Homestead’s employees. February was dedicated to U.S. presidents — 23 have visited — and March spotlights fashion and entertainment.

As always, guests can opt to participate in these events as well as a long roster of activities that covers all day and all evening year round. Or, they can choose to do none of that. Instead, they can claim a rocker on the front porch and enjoy what Lesslie Hall calls “Homestead time, where every day feels like Saturday.” And, that, obviously, is an attraction that has never gotten old.