Liberty University President Jerry Falwell Jr. said he supports changing the name of the city of Lynchburg, calling it an “embarrassment to Liberty University ever since we started” because of perceived racist connotations.

He also said in an interview Sunday that the university plans to reopen with “business as usual” for the fall semester and is prepared to sue the governor if he places limits on university functions, including attendance at sporting events.

The city’s name, which has come under discussion during recent Black Lives Matter protests, was named for its Quaker founder, John Lynch, who freed his own slaves during his lifetime (1740-1820) and supported the antislavery movement. But without that context, the city’s name evokes racist lynchings for many.

Two weeks ago, Lynchburg resident Daisy Howard posted a petition on Change.org calling for the city to change its name, garnering more than 5,300 signatures as of Friday afternoon — but not yet Falwell’s, although his spokesman said he would sign it soon. The petition is addressed to the Lynchburg City Council.

“I cringe having to say the name of the city Lynchburg because ‘lynch’ is in the name,” Howard’s petition says. “I do anything I can to get around it. But this isn’t about me. The name of a city should not have such violent, racist and horrifying connotations.”

She adds that the petition has nothing to do with “the man John Lynch or his family,” adding, “we can honor John and his family by removing the word that has grown to mean something he would not be proud of.”

A second petition — started by Cece Thomas, who writes that Lynchburg is her hometown — opposes the name change and has been signed by more than 8,800 people as of Friday. “This insanity has got to be stopped,” Thomas writes.

The discussion of changing the city’s name comes amid protests across the country, including in Lynchburg, decrying police violence and systemic racism after a Minneapolis police officer kneeled on George Floyd’s neck for nearly 9 minutes during Memorial Day weekend, killing him.

Lynchburg, like many cities, has experienced Black Lives Matter protests that have been largely peaceful, although 15 people were arrested in early June on a variety of weapons-related and property damage charges.

Falwell said in a statement Friday that the university, which his father founded, changed its name from Lynchburg Baptist College to Liberty Baptist College in 1976. “So many people from Liberty have told me that when they travel and tell people where they’re from, they’re often asked, ‘Why in the world would you want to live in a racist place like that?'” Falwell said. “It’s because people take ‘lynch’ and they think it means there were lynchings here, when the truth is it was named after a Quaker.”

In May, Falwell came under heavy criticism for what many took as a racially insensitive jab at Gov. Ralph Northam — Falwell’s tweet saying that he’d wear a face mask only if it depicted the now-infamous blackface picture from Northam’s medical school yearbook, accompanied by the image. Northam has said neither person is him but was called on to resign after the photo came to light in February 2019.

Falwell issued an apology for his tweet in early June, but Liberty has seen its director of diversity retention, alumnus LeeQuan McLaurin, resign. Some of Liberty’s Black students, including four athletes, also have announced their intentions to leave after the apology.

“The program, staff and teammates were a complete blessing to my life,” former Liberty defensive back Kei’Trel “Tre” Clark wrote in late June, announcing his decision to enter his name into the NCAA transfer portal. “However, due to the cultural [incompetence] within multiple levels of leadership, it does not line up with my ethics.” On Friday, Clark said he was transferring to the University of Louisville.

McLaurin said in his resignation email that the tweet was indicative of larger problems that led to a drop in Liberty’s Black residential undergraduate population from 10% to 4% between 2007 and 2018. Ronald Kennedy, Liberty’s executive vice president of enrollment management and marketing, said in an email Sunday that the new incoming undergraduate enrollment of Black residential students rose to 5% in 2019, after staying at 4% for four previous years.

Falwell added in an interview Sunday that the residential undergraduate population is only 8% of Liberty’s total current enrollment — approximately 127,000 students enrolled in residential and online classes at undergraduate and graduate levels. According to university statistics from the fall and spring semesters of the 2018-2019 academic year, as well as the 2019 summer term, 15.6% of Liberty’s total enrollment of 108,000 was African American, Kennedy said.

Turning to other topics, Falwell said that Liberty plans to return to “business as usual” this fall with in-person classes and football games, unless Northam “prevents it,” in which case the university is prepared to file suit against the governor.

Although Falwell acknowledged being concerned about the record number of COVID-19 deaths in Florida — which recorded an average of 56 deaths per day over the past week, an increase of 35% compared with a week ago, according to CNBC’s analysis of state health department statistics — he said that the increase in case numbers is due to increased testing. Epidemiologists have disputed this argument, which President Trump has also used, saying that the daily percentage of positive tests is a key statistic to watch.

Falwell said that students between ages 18 and 23 are at less risk of dying or getting very sick from COVID-19 than older people are, which the Centers for Disease Control and Prevention backs, although CDC officials have said that younger people can carry the virus to vulnerable older people who may get sicker or die.

To protect the university’s older staff and faculty, Falwell said that staff members will be allowed to work night shifts if they wish to avoid large groups of people, and faculty members can request to teach classes remotely if they are concerned for their health or that of a family member. Liberty also plans to place Plexiglas barriers in key areas as students return, he said.

“I think there’s a way to do it safely to protect people. I really just don’t see any reason college-age kids have to wear masks,” he said. “I’m not a doctor, so I can’t say that with scientific accuracy, but it’s just what I’ve observed. … We’re going to play it by ear.” 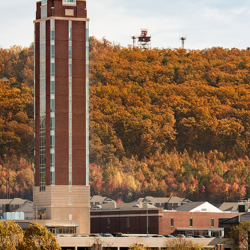 Dominion will award $500K among 60 recipients this year