It’s been more than eight years since Apple debuted the iPhone. Since then, smartphone adoption rates have exploded: Two-thirds of Americans now own a smartphone, and the numbers aren’t slowing down.

This revolution in technology has not only transformed American society but business as well, and its impact can be seen perhaps most directly with the banking industry, which has reduced its overall number of branches in reaction to consumers seeking faster, on-demand technological solutions to their financial needs outside of regular banking hours. 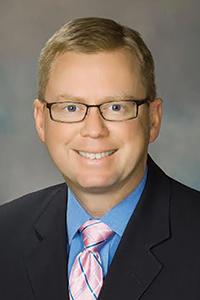 “Banks in Virginia are acutely aware of the way technology is changing the banking model, just like banks all over the country,” says Bruce Whitehurst, president and CEO of the Virginia Bankers Association.  “You see wide adoption of online banking and mobile banking. There are a lot of changes going on in branches in terms of both the way a branch is staffed and the size of the branch because clearly branch traffic continues to decline.”

Technology also is changing credit unions. At Virginia Credit Union, Chris Saneda, chief information officer and executive vice president of data and digital innovation, says:“We strongly believe that the mobile device is going to be the gateway to all other services. It might be a phone, it might be a wearable, who knows? We have a mobile-first posture to make sure we have a strong consideration among mobile enthusiasts. All ages are getting online and going mobile because of the convenience. It’s not limited to just millennials.”

More than technology, “what’s really changing is the needs and priorities of our customers, and because of that … we’re making our entire organization much more accessible to the customer base,” says Leesburg-based Anthony Tremonte, a financial center sales and Merrill Edge regional executive for Bank of America.

For instance, Bank of America, SunTrust and other financial institutions are beginning to implement live video chats with tellers at ATMs. Video tellers can perform any services that an in-person teller can, except that they offer extended weekday and weekend banking hours compared with branches, Tremonte says.

Nevertheless, mobile still is the driving force behind banking technology at present.  About 32 million of Bank of America’s 48 million national customers are using online or mobile banking, with 18 million alone using mobile devices, he says.

“We’re doing 222,000 mobile check deposits every day. The total number was 20 million for the third quarter, worth about $17 billion in assets. That’s a big number to capture through a mobile app, and I think that showcases how important our customers think this is,” Tremonte adds.

Features such as mobile check scanning, making bill payments and transferring money are commonplace on many apps now. Virginia Credit Union offers loan applications via mobile banking, and Bank of America customers can use their smartphones to schedule a same-day, in-person appointment with a bank representative, similar to making an appointment at the Apple Store’s Genius Bar. 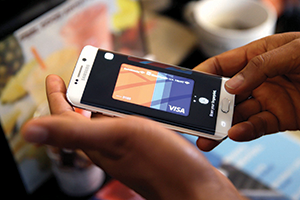 In many cases, mobile phones are beginning to supplant debit cards, via digital wallet services such as Apple Pay, Android Pay and Samsung Pay, which allow consumers to pay for purchases by scanning their smartphones. A number of banks and credit unions, including Bank of America and Virginia Credit Union, already offer these services.

“We believe that the physical act of swiping a card will likely not exist in 15 years,” Saneda says.

And even if the card does still exist then, the magnetic stripe on the back may not, Whitehurst says, noting that it’s gradually being phased out in favor of an embedded microchip that’s more difficult to counterfeit. You may already have a card with the microchip. Major retailers such as Target are using it.

Apple Pay utilizes fingerprint authentication as a security protection for financial transactions, and bankers say biometrics such as retina scanning at ATMs are likely on the horizon in the next decade. This year Virginia Credit Union plans to implement voice authentication for customers using its automated phone services.

As the Internet of Things grows, there also will be more devices enabled to make payments, from clothing and wearable devices to automobiles.

“It’s really about the experience. Payment will be an afterthought,” says Saneda, noting that there are a staggering number of tech entrepreneurs and retailers developing new payment methods and apps. Deciding which technologies and applications make for good strategic partnerships and added convenience for customers is a consideration banks and credit unions will be making more and more.

Not everyone is on board with new tech, however.

“We’re always being sensitive about folks who are not comfortable with technologies yet,” Saneda says. “You don’t have to do biometrics — there are other vehicles and paths still available,” including in-person tellers, ATMs and phone services.

Many branches are integrating technology such as iPads into their day-to-day business practices and even working to educate customers on how to use it.

At Cardinal Bank’s University Mall branch in Fairfax, customers can get demos of how to do banking services on devices including the Apple Watch and Samsung smartphones.

“We did a total redesign [of the branch] and placed less emphasis on the teller line. It’s not even visible to the client. We really want it to be more about the relationships. … We focus on explaining our products,” says Bernard H. Clineburg, executive chairman of the Tysons Corner-based bank. “The design is more modern, more open, and it’s funny, we find that … it’s becoming a place for a couple of the older ladies to come and enjoy a coffee and make deposits. It’s kind of fun.”

Whitehurst notes that “it used to be that you had to go into the branch for your banking. Then we had ATMs, then telephones, then online banking, then we had mobile. The addition of [new] delivery channels doesn’t mean banks have eliminated the prior channels.

“You can bank 24/7 now, no question about it, but you still have all these options,” he says. “There have been significant changes, all driven by technology, that have made the ability to do your financial transactions how you want to do it and when you want to do it as good as it’s ever been.”