Fewer players in the game

The marketplace effects of proposed insurance mergers are still unclear

These days the old adage that change is the only constant is a good fit for the health insurance business.

Big mergers by major insurance companies, announced in July and driven in part by the impact of the Affordable Care Act, are remaking the industry in ways that aren’t yet clear. For now, though, it seems like bigger is considered better.

In July Humana and Aetna announced merger plans that would create a company with 33 million customers. Later that month Anthem and Cigna announced a proposed merger that would provide coverage for 53 million patients. If the deals go through, there would be just three major insurers, with United Healthcare being the third with 45 million members.

That’s the kind of trend that puts fear into business and individual insurance customers, because fewer competitors often means less competition and thus higher prices. Maybe that will prove correct, but the insurance business is different in some key ways. For one thing, insurers don’t always compete directly against each other.

“When I look at the mergers in Virginia and what lines of business they’re in and where they overlap, the conclusion I come to is these are really complementary mergers,” says Doug Gray, executive director of the Virginia Association of Health Plans. “They’re not really earthshaking developments. There’re ways the [insurers] can diversify their business portfolios and possibly have a little bit more leverage” when negotiating with hospitals and doctors. “But it’s not a big collapse of competition … because the two parts weren’t competing anyway.”

In Virginia and elsewhere, Cigna’s focus is on national accounts and the large-group market in Virginia, businesses with 100 or more full-time-equivalent (FTE) employees. Anthem is very much the opposite, insuring state employees, individuals and small groups. It is the biggest insurer in Virginia and a number of other states. “So Anthem sees a chance to expand enrollment, gain some efficiency and to serve national accounts they might not have gotten before. It helps them compete with United Healthcare and Aetna,” Gray says.

Scott Golden, a spokesman for Anthem Blue Cross Blue Shield in Virginia, says wait and see. “We’re excited about it; we think it’s going to bring exciting new products for our members,” he says. But those details haven’t been developed yet. The merger isn’t supposed to close until the second half of 2016, he says. “It’s too early to tell.”

Few details
The uncertain response to the merger proposals suggests investors and regulators aren’t sure what to make of the deals either. A month after Aetna’s proposed $33 billion takeover, Humana’s stock was trading at about $185, well below Aetna’s offer of $223 per share. The proposed $48.4 billion sale of Cigna to Anthem fared better, with both companies reporting increased earnings and revenue in the second quarter. Of course, both deals still have to get past the antitrust regulators. 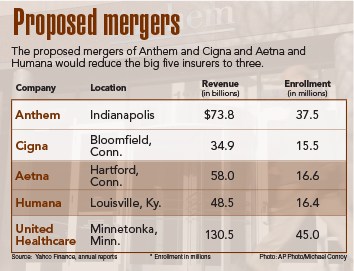 Beyond the usual upbeat press statements, the companies involved in these mergers are offering few details about how the deals will affect the market. Anthem launched a website (betterhealthcaretogether.com), telling employers and individual customers that the combined company “will expand access to an unmatched network of hospitals, physicians, and health-care professionals. No company will be better positioned to deal with the challenges of a fast-changing health-care market,” the company says.

There is good reason to think that the businesses most threatened by the mergers are the hospital networks and other health-care providers who will now have to negotiate prices with even more powerful insurers. Sean Connaughton, president and CEO of the Virginia Hospital & Healthcare Association, would like regulators to keep that in mind. “Given current and pending federal health-care cuts, we urge federal regulators to carefully examine whether the proposed mergers will give the insurers more leverage to negotiate lower reimbursements from hospitals and providers that can hurt the continued viability of these critical community and economic assets.”

A key reason that hospitals and insurers are making moves to improve their positions is the controls put in place by the Affordable Care Act. Under its rules insurers have to meet a minimum “medical loss ratio” of 80 percent, meaning they have to spend 80 percent of their premium dollars on medical care. That’s a big deal, because the requirement steers insurers to find more profit in efficient operations through economies of scale that are supposed to come with big mergers.

Many agreements in place
The premise that bigger insurers will have more leverage with health-care providers may not pan out in all markets. For one thing, hospital groups often already have agreements in place with major insurers. Anthem has ongoing agreements, for example, with Bon Secours Virginia Health System in the Hampton Roads and Richmond regions. It also has an agreement, announced in September 2013, to make HCA Virginia Health System a “preferred provider” for insurance coverage bought through the federal exchange.

Gray with the health plan association says hospitals can’t complain too much, because in many areas they are the only game in town. Inova Health System, for example, has hospitals and other health-care facilities all over Northern Virginia. So any insurer who wants customers there has to do business with Inova. And, some hospital groups are going for vertical integration. Sentara Healthcare, for example, owns Optima Health, an insurance plan with about 444,000 members in Virginia.

Sentara Healthcare continues to expand its footprint in Virginia as well. In July it closed on a deal to acquire Pratt Medical Center in the Fredericksburg region. Pratt, a multispecialty physician group, has about 66,000 patients in the region served through seven locations. It solicited bids more than a year ago before entering into negotiations with Sentara.

So the key competition in the insurance and health-care industries is often between different models of doing business and not companies competing on a level playing field. The coming months will bring more changes to that field as the mergers undergo scrutiny from regulators and investors, and health-care providers continue staking out new turf.

Virginia to use federal grant to boost health-care enrollment