The new president of the Lexington-based George C. Marshall Foundation, Rob Havers, hopes Americans will look to it for a historical perspective on growing tensions between the United States and Russia.

“If you cast your eye across the news media, everybody is looking at what’s happening in the Ukraine,” he says. “Is this the beginning of a new Cold War? I’m not sure that is the case.”

Havers knows about the Cold War. Before coming to Lexington in May, he headed The National Churchill Museum on the campus of Westminster College in Fulton, Missouri. In 1946, Winston Churchill delivered his famous “Sinews of Peace” speech at the college in which he remarked, “an ‘Iron Curtain’ has descended across the continent” of Europe. The Iron Curtain became synonymous with Soviet domination of Eastern Europe during the Cold War.

Havers believes that studying the past can offer guidance for leaders wrestling with current problems. “We certainly live in challenging times,” he says. “The challenges that Marshall faced evaporated a bit, but they haven’t gone away.”

The foundation preserves and promotes Marshall’s legacy. A graduate of Virginia Military Institute, Marshall served as the Army chief of staff during World War II. Under President Harry S. Truman, he served as secretary of state from 1947 to 1949 and secretary of defense from 1950 to 1951, the beginning of the Korean War.

He is best known for the “Marshall Plan,” the European Recovery Act that helped a devastated Western Europe rebuild its economy after the world war, preventing the spread of communism. Marshall was awarded the Nobel Peace Prize in 1953.

“When you have a man like Marshall who lived a very long life and was involved in major events of the 20th century you can use him as a thread to discuss history more broadly,” Havers says.

He considers Marshall to be the antithesis of the contemporary world leaders who promote themselves relentlessly. “He was a self-effacing, modest man who sought nothing for himself,” Havers says. “Marshall’s qualities may seem different to the modern world, but if anything, they are more important today than they once were.”

The foundation’s most important ongoing project is the editing and publication of the Marshall Papers. It recently received $29,700 in continuing support from the National Historical  Publications and Records Commission for the publication of the final volume of the papers. “In the next one and a half years, it will be completed,” says Havers. “It gives the sense that the Marshall Foundation is reimagining its place in the world.”

The foundation also is converting paper-based documents, such as maps and Marshall’s correspondence, into a digital format.

“We are also rebuilding our website to make it easier to research,” says Rick Drake, the foundation’s director of corporate relations. “Our Internet traffic has more than doubled in the last four years, and traffic keeps increasing. Many of the people who access information online tend to come to the research library to read documents. That is an unexpected development for us.” 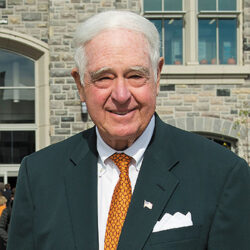