Home Other Global Gaming for business

ThinkFun sells toys and games in stores, online and abroad

It’s all fun and games at ThinkFun in Alexandria. Owners Andrea Barthello and her husband, Bill Ritchie, wouldn’t have it any other way. “Our atmosphere is relaxed and casual, and we have a friendly, funky look,” says Barthello, who founded the game manufacturing company with Ritchie in 1985.

The company designs and manufactures games for children and adults that “inspire learning, spark creativity and build problem solving through play,” says Barthello. “We work with companies that really get our mission — to translate the brilliant ideas of the craziest mathematicians, engineers and inventors into simple toys that can be appreciated by boys and girls around the world.”

The couple founded the company in the basement of their Alexandria home as Binary Arts because its first puzzles were based on binary code. They changed the name to ThinkFun in 2005. “Binary Arts sounded like a computer design company,” Barthello says. “We thought ThinkFun was a reflection of who we are and what we do.”

The company’s first product, a Disentanglement Puzzle, was shaped like a cat or horse and made of wood and wire. “We sanded and assembled them and sold them to stores,” Barthello says. It produced its first injection-molded product, a brain-teaser puzzle called Spin Out, in 1987, paving the way for mass production. Now the company sells its products around the world. “Our games have been translated into over 20 languages,” says Barthello. 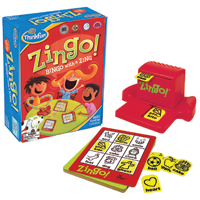 ThinkFun was included on the Inc. 500 list of fastest growing private companies in America from 1991 to 1994. It currently produces 60 products. “Over the years we have produced some products and taken them off the market,” Barthello says. “We cull it out by looking for the best of the best and evergreens.” Two of the company’s best-known products are Rushhour, a sliding block puzzle, and Zingo, a bingo-style game for early readers.

The company’s products originally were carried in independent toy and game stores and national retailers such as Natural Wonders and Zany Brainy. ThinkFun’s customer base shifted, however, when those chains closed. “They all went out of business,” Barthello says.

The company continues to sell to independent stores but now has accounts with large retailers such as Barnes & Noble and Marbles: The Brain Store. “We do a lot of business online as well. We sell to Amazon, and we also have an online store for consumers,” Barthello says. The company also has created online games, global educational programs and three mobile apps. “That is our strategy going forward: having an online presence to deliver intellectual property to kids in schools.”

ThinkFun moved from a small office building to its present 8,000-square-foot location on Cameron Street in Alexandria in 1996. The company, now with 32 employees, also has a 40,000-square-foot warehouse in Hanover, Pa. Barthello likes the company’s Alexandria location because it’s close to three major airports. “We also love the historic nature and the character” of Alexandria, she says. “We are a creative bunch here, and we are in a community of interesting people.”

Sales have been affected by the lagging economy. From 2009 to 2012 revenues decreased by 14 percent (the company won’t release sales figures.) This year, however, looks promising, Barthello says. “We are off to a start that puts us to our highest level ever. Our products from last year are being reordered at a good pace. It’s a combination of the economy getting better, new products and our evergreens.”

The company began selling internationally in 1990 when a couple of German buyers saw its products at the International Toy Fair in New York and asked to distribute them. Today approximately one-third of the company’s sales are international. Major markets include Russia, Germany and Turkey. “We sell to almost 50 countries through distributors that sell to stores,” Barthello says.

Chris Gough, ThinkFun’s director of international business, travels to Germany each year for the Nuremberg Toy Fair, the largest trade show in the industry. “It attracts people from around the world,” he says “I go there to meet with other distributors from around the world and show them our new games.”

Gough also attends the game fair in Essen, Germany, which is open to the public. “Our distributor has a booth here, and we are able to get reactions from consumers and users,” he says. “We get people from all over Europe. Many dress up in role playing games such as Star Wars.”

Germans have a long tradition as consumers of toys and games, he adds. “They are willing to bring in games and toys from all parts of the world.” But, games have to be adapted to the German market. “We have to get the games translated, and the distributor does that for us. Germans are pretty particular. Other parts of Europe are more willing to have a multi-language package. Germans typically want all German on the package.”

Over the years Gough has learned the importance of meeting with distributors face-to-face. Not only to introduce them to ThinkFun’s games but also to see how they conduct business. “It’s good to have them come see how we do business as well,” he says.

Visiting Nuremberg
Nuremberg’s cobblestone streets and castles are just part of the city’s charm. The city is known for producing dolls, gingerbread, bratwurst and handmade toys. The quaint Old Town section includes the Nuremberg Toy Museum, with toys from the past two centuries. Inside the city walls is the Gothic-style Shoner Brunnen fountain, home to a market selling a variety of handmade items since the Middle Ages, and the Hauptmarkt featuring the city’s famous gingerbread.

Economy in Alexandria
Located inside the Beltway, Alexandria has a varied mix of high-technology firms, management consulting companies and service firms. The city ranks fourth in the nation for the number of trade and professional associations based in the city and also is home to the United States Patent & Trademark Office. Major employers include the Department of Commerce; Department of Defense; Alexandria City Public Schools; the Institute for Defense Analyses; CNA, a nonprofit research and analysis organization; and Gali Service Industries, which provides facility maintenance services. Many international companies from countries such as Australia, Belgium, Germany, India, Japan, United Kingdom and France have operations in Alexandria.

Visiting Alexandria
With a prime location on the banks of the Potomac River,  Alexandria offers picturesque views of the Washington, D.C., skyline. The city’s popular waterfront area features restaurants, live music and a variety of street performers. One of the city’s most frequented addresses is King Street in Old Town Alexandria. Destinations there range from the George Washington Masonic Memorial and its collection of Washington artifacts to the trendy Torpedo Factory Art Center. The art center includes more than 80 working artists’ studios, art galleries and the Alexandria Archaeology Museum.  Old Town Alexandria’s Market Square farmers market has been in operation since 1753.