Seeking the right to reopen his businesses, the owner of nine Gold’s Gym franchises in Virginia has appealed to the Supreme Court of Virginia, which may rule by the end of the week.

Hall said Tuesday night that he hopes to hear a decision from the Supreme Court of Virginia by the end of the week, just as the state is expected begin to allow businesses like his to reopen on a limited basis. The court had not yet set a hearing time as of midday Wednesday.

Even with the governor planning to loosen restrictions on businesses, Hall said he doesn’t plan to open any of his gyms until Phase Two of Northam’s reopening plan, when 50 people can gather in groups and gyms will be allowed to have clients inside. In Phase One, which is set to start Friday everywhere but in Northern Virginia, gyms are only permitted to conduct classes outdoors.

“They don’t allow me to just have classes in the parking lot,” because of safety issues, Hall said of the property owners where his gyms are located. “That was something that was thrown out there.” He said he doubts that many fitness centers will be able to reopen during the first weeks of the state’s reopening plan.

Hall said that his motive for filing suit April 21 was to help keep his 1,100 employees working. Before going to the courts, he and his business partners had come up with a full list of safety protocols, including requiring gym members to wear masks for at least 30 days, that Hall submitted to the governor’s office in mid-April. Hall also is president and co-founder of Taft Construction Inc. in Culpeper.

His attorneys — including Republican state Sens. Bill Stanley and Ryan McDougle — argued that Hall’s franchises were “private health clubs” and not public gyms subject to the governor’s order. Solicitor General of Virginia Toby Heytens, arguing for Northam, said that the closure of membership-based gyms and fitness clubs is within Northam’s powers as governor.

“The governor is keenly aware of the toll these measures have taken on all Virginians and that — regretfully but inevitably — some have borne a disproportionate share of the economic pain,” Heytens wrote in a brief. “But reopening too quickly risks triggering a second wave of cases.”

Another gym owner, Thomas Milton of Titan Fit in Roanoke, was cited by police for operating his gym during the shutdown in April 21, when Executive Order 53 was in place. Greg Phillips, his attorney, is part of Stanley’s law firm and now represents Hall. However, a case involving an indoor shooting range in Lynchburg was decided in the plaintiff’s favor, allowing the business to reopen.

Hall said Tuesday that if he doesn’t win his case, at least some of his gyms will be in economic jeopardy, with rent and other expenses due; with a two-week delay in Northern Virginia, he doesn’t expect to be able to reopen his gyms there until July.

“No one’s going to make it that long,” he said, noting that some fitness clubs have already filed for Chapter 11 bankruptcy protection, including Gold’s Gym. “I just think it’s important for people to know that this litigation is not political. I don’t agree with this governor. I think everyone should have a fair chance to meet the regulations.”

Commonwealth Transportation Board funds are aimed at helping transit agencies recover from ridership losses and other COVID-19-related operating expenses.

Small businesses hurt by coronavirus can apply for federal funds

Small businesses can receive up to $2M in funding to pay for fixed debts, payroll, accounts payable and other bills. 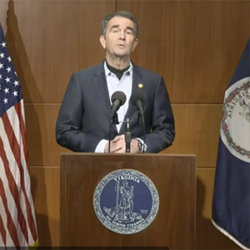