School systems are closing and state workers are preparing for telework.

Gov. Ralph Northam announced a state of emergency Thursday afternoon as the number of COVID-19 cases from Virginia reached 17, including two Virginians who have tested positive in Texas and are currently there, State Epidemiologist Lilian Peake said.

Meanwhile, nearly 20 colleges and universities across the state have canceled in-person classes and moved instruction online. And the Henrico County and Richmond city public school systems have closed schools for at least the next two weeks. Fairfax County is closing Monday to prepare for potentially moving classes online and other systems, such as Loudoun County and Fredericksburg city schools, are closed for at least the next week. Virginia Beach and Norfolk schools are closed on Monday, as they consider closing and moving to online and remote instruction.

State agencies are preparing for telecommuting, the governor said during his news conference Thursday, although he did not announce any statewide orders. According to a news release, Northam has directed the secretary of administration to phase in teleworking for state employees, and the Department of Human Resources Management will work with the health department’s Equity Workgroup to support employees who can’t work from home, including janitorial, food and grounds staff.

The human resources department also is ensuring that all state agencies have updated emergency operations and paid leave policies, including for part-time employees, particularly those who have been exposed to the virus or traveled to a high-risk area.

Northam said that the situation surrounding the coronavirus is “fluid and changing rapidly,” announcing four new actions he will take in response to its spread:

Peake added Thursday that there are now 10 confirmed COVID-19 cases in Northern Virginia and two in Central Virginia, an increase of six cases since Wednesday’s news conference. She offered less information on patients compared with earlier cases, in which the Virginia Department of Health gave age ranges and counties of residence.

Peake said at Thursday’s press conference that the six new cases confirmed Thursday were people who had contact with earlier identified cases. “We have not seen signs of community spread,” she said. The four earlier cases connected to Nile River cruises — two in Fairfax and two in Virginia Beach — are under investigation by the CDC, she added. The two newly identified Virginia patients are in Texas, and the VDH is working with them about a return date.

The governor also directed Attorney General Mark Herring to provide legal information to elected bodies — such as boards of supervisors — about public meeting protocol during the emergency while maintaining transparency. Northam also asked the state’s economic development officials to determine the economic fallout from the pandemic.

“Our goal is to get everybody back to work as soon as possible,” he said, while maintaining safety. Northam encouraged public school systems to make their own decisions about closing schools, noting that many have snow days available because of the mild winter.

“Right now we believe we have enough test kits in Virginia,” Northam said, noting that the state has between 500 and 600 tests available, which would be used for one individual apiece. But universities and private labs are also working on producing their own testing kits, said Denise M. Toney, director of the state’s Department of General Services’ Division of Consolidated Laboratory Services, which is managing the state’s testing for the virus.

Dr. Norman Oliver, the state health commissioner, said the health department is focused on vulnerable people, such as nursing home residents and frontline responders at the state’s hospitals. “We have had pandemic procurement plans in place for many years,” he said, and he is communicating with hospitals about their needs for specific equipment like N95 masks and ventilators. The state has allocated $10 million for emergency purchases, and Congress released $13.6 million to Virginia for virus response.

Oliver said that the governor can only cancel state-sponsored events, such as the Women in Innovation Conference, which has been canceled next week in Richmond. Large gatherings like Virginia Beach’s Something in the Water festival, scheduled for the end of April, do not fall under his authority, Oliver added.

“Pharrell Williams will have to think about what he wants to do.”

Here are the coronavirus cases that have been reported so far in Virginia:

Case 1: A Marine assigned to Fort Belvoir in Fairfax County who had recently returned home from international travel on “official business,” was reported Saturday.

Case 2: A Fairfax resident in their 80s who had traveled on a Nile River cruise was reported Sunday.

Case 3: An Arlington County resident in their 60s who had traveled internationally was reported Monday.

Case 4: The spouse of the Fairfax resident was reported positive for the disease on Monday.

Case 5: A Spotsylvania County resident in their 50s who had a fever, cough and shortness of breath was reported Monday.

Case 6: A Virginia Beach man in his 60s who had gone on a Nile River cruise where other cases had been reported was reported as positive on Tuesday.

Case 7: A Virginia Beach woman in her 50s and the spouse of the Virginia Beach man. She had also gone on the Nile River cruise and was announced positive on Tuesday.

Case 8: A Loudoun County resident in their 40s who is believed to have come in contact with another coronavirus patient at Christ Church, Georgetown in Washington, D.C., was reported as positive on Tuesday.

Case 9: A teenage patient in the Chickahominy Medical Health District in Hanover County is believed to have contracted the virus in international travel and was reported as positive on Wednesday.

Case 11: Late Wednesday, the Alexandria Health Department announced a resident had tested positive after exposure at their church in Washington, D.C.

Cases 12-15: Identified as people in Northern Virginia who have been in contact with earlier patients.

Cases 16 and 17: Identified as Virginians who tested presumptively positive in Texas and are currently there. 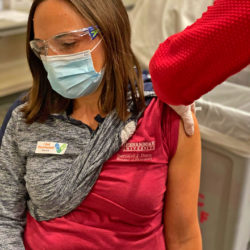