In an action hailed by environmental groups, Gov. Terry McAuliffe signed an executive order on Tuesday that instructs the Department of Environmental Quality to begin the process of establishing regulations in Virginia that will reduce carbon emissions from power plants.

“Today, I am proud to take executive action to cut greenhouse gases and make Virginia a leader in the global clean energy economy,” McAuliffe said in a statement. “The threat of climate change is real, and we have a shared responsibility to confront it … As the federal government abdicates its role on this important issue, it is critical for states to fill the void.”

The directive follows Executive Order 57, which required the state’s secretary of natural resources to convene a work group to study and recommend methods to reduce carbon emissions.

Attorney General Mark Herring recently issued an opinion confirming that the state’s Air Pollution Control Board is legally authorized to regulate greenhouse gas emissions, including the establishment of a statewide cap on emissions “for all new and existing fossil fuel electric generating plants.”

McAuliffe said Virginia already is experiencing the effects of climate change in its coastal regions because of rising sea levels. His office estimates that the threat from frequent storm surges and flooding could cost the commonwealth close to $100 billion for residential property alone. The impacts extend  beyond the coasts, as half of Virginia’s counties face increased risk of water shortages by 2050 resulting from climate-related weather shifts.

The order drew both praise and criticism.

“As a Virginia-headquartered company, Mars applauds Gov. McAuliffe’s new regulatory action to reduce carbon emissions and promote renewable energy and efficiency,” Kevin Rabinovitch, Mars global director of sustainability, said. “At Mars, we believe climate change is real, and business and government need to work together to address it. This action … is timely and critical to achieve a clean and efficient energy transition.”

The Southern Environmental Law Center (SELC) characterized McAuliffe’s action “as the strongest move yet from a Southern state to push back on the Trump administration’s rollback of President Obama’s Clean Power Plan.”

SELC attorney Will Cleveland released a statement praising the governor   for “showing Virginia and America what true leadership looks like. Climate change poses the single greatest environmental threat the world has ever known. This bold action demonstrates that when Washington fumbles and falls, with the right leadership, the states can lead.”


The Chesapeake Climate Action Network said the directive could create a legal framework for the state to create its own carbon cap program to annually lower power-plant pollution. “That program would most likely be linked to the highly successful Regional Greenhouse Gas Initiative, a cap-and-trade system now in place from Maine to Maryland, or to California’s cap-and-trade system.”

“Though late in his administration, Gov. Terry McAuliffe did the right thing today in announcing a pathway for Virginia to significantly cut greenhouse gas emissions from power plants. The governor’s executive directive … is precisely what environmental advocates have been asking the governor to do for over two years now,” Mike Tidwell, executive director of CCAN, said in a statement.

“Now the governor should further cement his climate legacy by opposing offshore drilling for oil and opposing the massive fracked-gas pipelines that Dominion and other companies want to build across the state,” Tidwell said.


Criticism came from Virginia House of Delegates Speaker William J. Howell (R-Stafford). He termed the governor’s action “ a broad assertion of regulatory authority, Washington-esque in both its nature and scope. The governor is attempting to implement a failed national policy in the commonwealth that will further hamper economic growth at a time when we desperately need policies to get Virginia moving again.”

Howell said McAuliffe “is ignoring the legislative process by putting forward broadly expansive environmental regulations — a policy he never proposed to the General Assembly. Policy of this scope and magnitude should be debated and voted on by the people’s representatives, not unelected bureaucrats.”

The Republican Party of Virginia also issued a statement panning McAuliffe’s action. RPV Chairman John Whitbeck called it “the worst kind of virtue signaling. President Obama's now-defunct Clean Power Plan would have reduced global temperatures .015 degrees Celsius by 2100, while sticking Virginians with another $5.5 billion in electricity costs — at a minimum. It would also take a number of reliable power plants out of service.

“If reducing emissions for the entire country nets a reduction of .015 degrees, how much less would a Virginia-only plan do?  Meanwhile, the free market has led to significant year-over- year reduction in carbon emissions. Terry McAuliffe's decision to 'resist' commonsense environmental policy will drive up prices for consumers, cost Virginians jobs, and make it even more difficult to grow our economy,” he said.

Deborah Brown, president and CEO of the American Lung Association of the mid-Atlantic, embraced the action to cut power plant emissions calling the action “a significant step forward for lung health.  Carbon pollution from power plants leads to warmer temperatures, which enhances conditions for ozone and particle pollution, wildfires, and longer allergy seasons.” 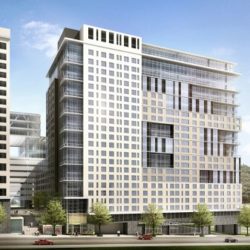 Trustify to add 184 jobs in Arlington