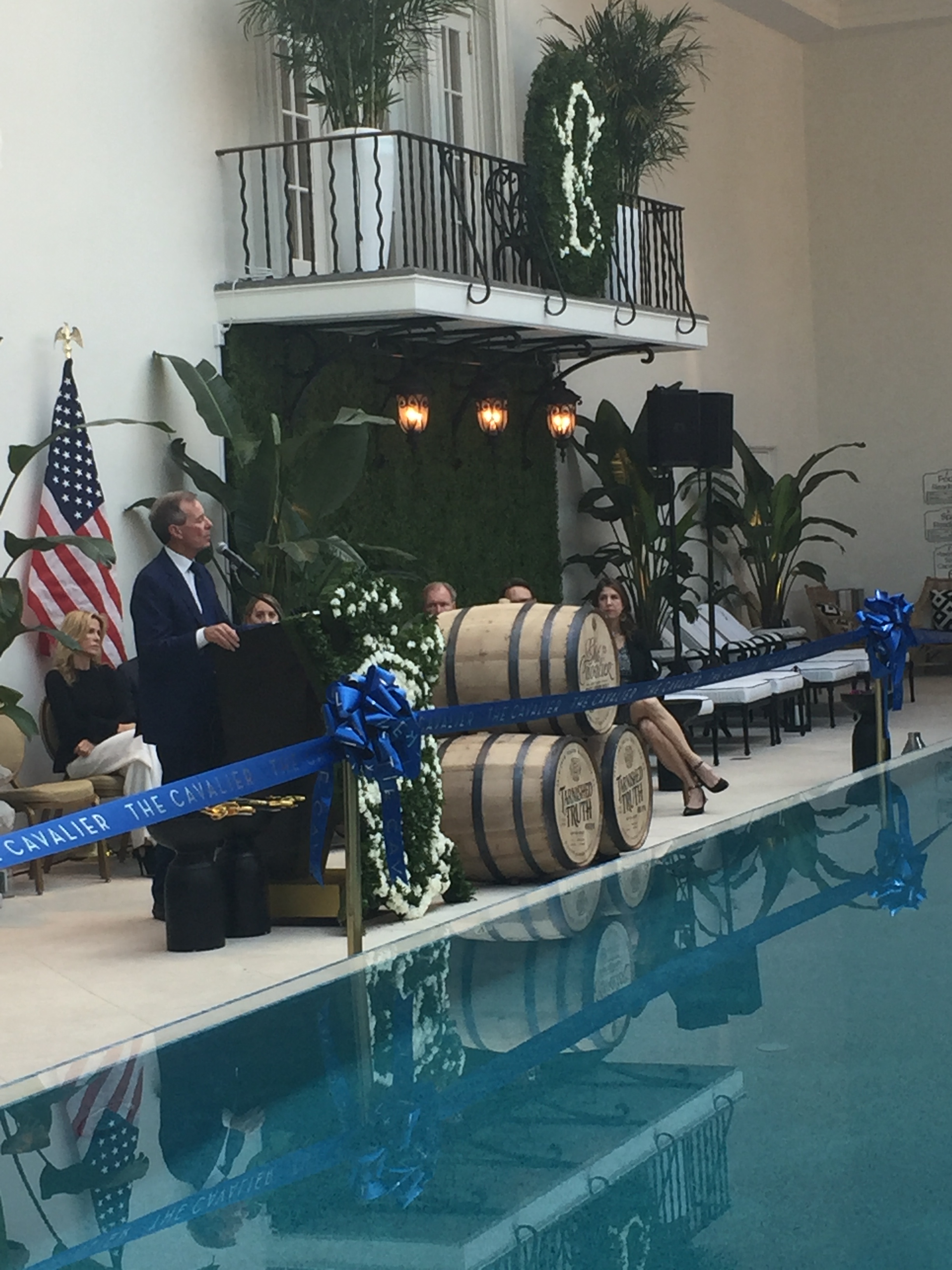 Editor’s note:  This story has been updated with a photo gallery (at end of story).

The spirits of people gathered for Friday’s ribbon cutting ceremony for the Cavalier Hotel in Virginia Beach were as high as the nor'easter winds that moved the ceremony from the lawn of the historic landmark to an area surrounding the indoor pool.

Alongside shimmering water and urns filled with lush birds of paradise plants, nearly 400 people gathered to celebrate the reopening of The Cavalier, an $81 million renovation project nearly five years in the making.

“It’s been a long time coming, and it’s been a quite a process,” said Bruce Thompson, the project’s developer and a partner in Cavalier Associates, a group of local business men whose bid to purchase and renovate the hotel was credited Friday with saving the building from the auction block. The other partners are Frank Reidy, George Metzger, Bart Frye, Ed Ruffian and John Lawson.

In 2012, a judge ordered that the property be sold to resolve a lawsuit over minority shareholder rights filed by warring factions of the property’s owners, the Disthene Group.

While some developers wanted to demolish the 85-year-old hotel and put up high-density projects, Thompson, the CEO of Gold Key| PHR, a Virginia Beach based hospitality company, said he and his partners considered it “an honor and a privilege” to save a structure that had played such an important role in the fabric of the community.  The seven-story hotel at 4200 Atlantic Ave. had been a venue for weddings, meetings and vacations ever since the Cavalier opened in 1927.

By the time Cavalier Associates bought the 22-acre property in 2013 along with another hotel across the street for $35 million, The Cavalier was in a state of ruin, Thompson told the audience. Consequently, the project took more money and more time than Thompson’s group or the city of Virginia Beach had envisioned.  What started out as a two-year, $40 million renovation doubled in price and took more than twice as long as originally anticipated.   “It took a village to make it happen,” Thompson said, crediting the other parties who were involved.


The city stepped up with nearly $25 million in money and incentives to help finance the renovation, which also benefitted from state historic tax credits.  The old hotel on the beach was demolished, and a Marriott Hotel and an Embassy Suites will be built at that location as part of a larger project that will bring more conference space to the beach resort city.  Thompson’s group also developed a new residential community of homes, cottages and bungalows on the grounds surrounding the Cavalier.


May brings the reopening of the oceanfront Cavalier Beach Club, which was known for hosting some of the most popular bands of the Big Band era. All told, the Cavalier project represents an investment of more than $200 million.


Julie Langan, director of the Virginia Department of Historic Resources, was one of the speakers during the opening ceremony. She praised the city and Cavalier Associates for stepping up to preserve The Cavalier.  “This is an extremely important project for the state, because it will be a boost to heritage tourism, “ she told Virginia Business. “It will be the poster child for the historic tax credit program.”

Virginia Beach Mayor Will Sessoms also spoke. He said he brought his 94-year-old mother to the ceremony. “She threatened to disown me, if the city didn’t save the hotel,” he joked.

“Today, the past meets the present and the future. We were proud to partner with you to save this castle on the hill,” Sessoms told Thompson. According to the mayor, the renovated 85-room Cavalier is expected to generate $41 million to $52 million in new tax revenue in the first 20 years.  The property employs 200 people year-round and 330 during its busiest seasons.

“Our vision is to grow Virginia Beach into a year-round tourism destination. The Cavalier has been restored and will help us with that vision,” the mayor said.

The property, which will be operated by Gold Key | PHR, is a member of Marriott’s Autograph Collection, an exclusive group of luxury boutique hotels. Mike Frye, a vice president of lodging development for Marriot, said when he first walked through the hotel four years ago to consider it as a candidate for the collection, “It wasn’t a hotel. It was dilapidated. It was tired. The rooms were tiny. It was a remnant of a bygone era.”

Frye told the gathering at the ceremony that he and a colleague wrestled with whether the property could qualify for the collection, because so much time and money would be needed to bring the property to Marriott’s Autograph standards.  While such hotels are independently owned and operated, a collection branding makes a property more distinctive. “But what we came back to every single time was that every great independent hotel has someone with passion, vision and drive, and it has a community behind it. We said, ‘That’s what is here. Let’s work as a team and make this happen. ‘”

In 2014, the Cavalier’s application for inclusion on the National Register of Historic Places was approved, a development that helped set the course for the renovation.  Thompson called the designation “both a blessing and curse.” While it helped win historic tax credits to defray the cost, it also meant painstaking detail to the structure’s architectural integrity.

“This was the toughest job we’ve ever done,” said Lawson, whose company, W. M. Jordan in Newport News, served as the general contractor.

Overall, Thompson said the biggest challenge was  “trying to find what the exact condition of the hotel was, trying to get to the end of the rehabilitation process … At the end of the third year, a year after we thought we’d be open, we were still in reconstruction and every day was a surprise.’’

As the rehabilitation stretched on, Thompson said the original interior design firm grew frustrated and stopped work on the job. Meanwhile millions of dollars in change orders kept coming.

Many of the hotel’s old bones, like the Hunt Room’s fireplace, were structurally compromised. To repair the fireplace, brick masons had to remove each brick one at a time, reinforce the fireplace with steel beams and re-lay each brick in its original order and location.

Once the rehabilitation work was done, “it only took a year for us to do the renovation,” said Thompson. “But the first three and half to four years, it didn’t seem like there was any end to the black hole that money was going into,” Thompson said.

The delays and need for more money — the Virginia Beach City Council originally committed to $18 million and later agreed to put up an additional $6.5 million in financial incentives — drew some public criticism.

Yet, Thompson noted that the community’s interest in the iconic hotel was evident during two weeks of free public tours that drew 10,000 people.

A luncheon and tours of the hotel followed Friday’s ribbon cutting. Many people took advantage of a chance to sign a barrel from the hotel’s new onsite bourbon distillery, Tarnished Truth, located next to the Hunt Room, a restaurant and lounge in the hotel’s lower level. Thompson said people who signed would be invited back 10 years later to receive a bottle of the 10-year aged liquor.

Besides the new distillery, people toured the hotel’s three restaurants, its lobby with original checkerboard terrazzo floor and a new spa. Another high point was visiting the suites of the partners of Cavalier Associates. Thompson said the partners all agreed to hire interior designers and to foot the bill for a themed suite, which created another unique element for the hotel.

The theme in each of the spacious suites is different. Thompson’s suite, complete with a victrola and a coat rack of ladies hats from the 1920s, is dedicated to the flappers and the big bands that used to play in the hotel’s Crystal Ballroom.

Lawson went with a nautical theme. His suite is decorated in hues of blue and yellow, with brass accessories and nautical paintings. The idea was to create the feel of a captain’s quarters.

Lawson, who attended the celebration, noted that his room, 602, was the place where Adolph Coors of the Coors beer fortune had stayed in June 1929 before he was found dead on the ground outside the hotel. “Obviously, I’m not a superstitious fellow. I’m sleeping there tonight,” said Lawson.

The celebration continued into Friday evening with invited guests enjoying a cocktail reception, dinner and dancing to the big band sounds of Good Shot Judy in the Crystal Ballroom.

With partygoers bedecked in tuxedos and women wearing beaded dresses and headbands that evoked the 1920s, it was easy to reimagine the grandeur of the Cavalier’s heyday when it attracted presidents and movie stars.

The hotel officially opens to the public on Wednesday, March 7. The public is invited to a grand illumination and fireworks display that will be held on the lawn at nightfall.