An Georgia-based developer working on the retail portion of a new major project in Newport News said Thursday that there’s a “hidden” annual disposable income in Newport News/Hampton that amounts to $812 million a year.

Jeff Garrison, a partner with S. J. Collins Enterprises –  the company working with W. M. Jordan to develop the Newport News Tech Center on a prime parcel near Oyster Point and Jefferson Avenue, said Whole Foods decided to locate at the center based on an independent consultant study that generated the figure.

According to Garrison, that disposable income isn’t picked up in traditional demographic market studies. “It’s the hidden income factor for Newport News and the entire Tidewater market,” he said. That’s because it includes income from sources such as retirement pensions, dividends and rental property, as opposed to annual salary income, which is more typical in a market study.  “With the presence of active and retired military in the area, that boosts this type of income,” Garrison said.

He made his remarks during an overview of the Tech Center project for the Hampton Roads Association for Commercial Real Estate. The program drew about 175 people to the City Center Marriott in Newport News.

Garrison noted that the new information has the potential to shake up the image of Newport News as a blue-collar market because of its massive shipyard.

According to Garrison, a consultant who used to work in research for Whole Foods and later went out on his own —  and whose name Garrison did not disclose — did the study. It was commissioned, Garrison said, because initially Whole Foods was leery about putting one of its grocery stores in Newport News.

It already had opened a store in Virginia Beach in October 2012, and that store was doing well.  “A research report on that said sales were two and a half times more than what was expected,” Garrison said.

The new research helps explain that strong showing, Garrison added, and it bumps the average annual income for Newport News residents from the high $50,000 range to the high $70,000 range, the market typically sought by Whole Foods.

S. J. Collins plans to begin construction on the 23-acre retail portion of the project soon and expects many stores will open by the summer of 2015. The Whole Foods will be the company's seventh store in Southeast mid-Atlantic market. Garrison said in an interview that nearly 70 percent, or about 140,000 square feet of the center’s 200,000 square feet, has been leased.  Asked during the program about the names of the tenants — many of whom are first-time retailers to the market — Garrison said the companies have asked that their names not be revealed at this time.  P. F. Chang’s restaurant already has announced it’s coming to the center, and there has been publicity about Zoes Kitchen, Café Rio Mexican Grill, and Starbucks, which would occupy locations on Jefferson Avenue.

Asked how the project would handle increased traffic at an already busy intersection, Garrison said more than $3 million in improvements will be made to existing infrastructure to help address traffic concerns.

The retail portion is but one part of what’s expected to be a 100-acre, $200 million plus, mixed-use project. It includes several major players: S. J. Collins, Newport News based W. M. Jordan Co., the city of Newport News, Jefferson Lab, (a federal research and testing facility) and the Virginia Tech Foundation.

W. M. Jordan plans to develop and build the tech center. It will house a corporate research center with labs, similar to the one Virginia Tech has in Blacksburg. Asked about its status, Skip Smith, Jordan’s vice president of business development, said in an interview the company still is working on the master plan with the stakeholders and plans to announce some news soon.

Already on board is Jeffrey Johnson, director of what will be known as the Tech Center Corporate Research Park. He came on board in January, moving from Akron, Ohio, to Newport News.  “The idea is to leverage discovery,” Johnson said. With the presence of the Thomas Jefferson National Accelerator Facility (Jefferson Lab)  next door, the project aspires to create an environment where people can live, work and play. “We want to give a canvass to this research environment, to entrepreneurs … to enable discoveries and applications for technology that will have an impact on Virginia Tech and the region,” he said.

In addition to the tech center and retail, the project includes apartments. An eight-acre parcel for the apartments already is rezoned and would allow no more than 300 units, said Bruce Berlin, a senior vice president with the Ellis-Gibson Development Group in Virginia Beach. They would be housed in three buildings. Construction is scheduled to start in summer 2015, Berlin said, and would take 18 months to complete. 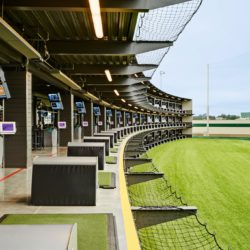