J&J vaccine put on pause in Va. due to safety concerns

Va. woman died in March after receiving vaccine, but officials have not confirmed connection

Updated 6:30 p.m. April 13: Virginia health officials say the CDC has confirmed the Virginia woman’s death is connected to their call earlier Tuesday for a pause on use of the Johnson & Johnson vaccine.

On Tuesday, the Virginia Department of Health immediately put a pause on its use of the Johnson & Johnson single-dose COVID-19 vaccine as federal health agencies recommended halting use of the Johnson & Johnson vaccine while they examine safety issues, including rare blood clots. According to federal data, a woman in Virginia died last month after receiving the vaccine, but state health officials emphasized they do not know yet if the fatality was related to the federal pause.

According to The New York Times, nearly seven million people have received J&J shots, which are effective after one dose, and nine million more doses have been shipped nationwide. Six women between the ages of 18 and 48 developed a rare blood clot disorder within about two weeks of vaccination, and one woman died, the Times reported.

According to the Centers for Disease Control and Prevention’s public Vaccine Adverse Event Reporting System, a 45-year-old woman in Virginia died from a stroke-like syndrome in March, less than two weeks after receiving a J&J vaccine manufactured by Janssen Biotech Inc., a pharmaceutical company owned by Johnson & Johnson.

State vaccine coordinator Dr. Danny Avula said in a press call Tuesday afternoon that he has contacted the CDC and the FDA for clarification. VDH does not know if this incident is related to the J&J vaccine pause, spokespeople emphasized.

According to the CDC report, the woman in Virginia, who was in her 40s, went to the hospital March 17 complaining of a suddenly worsening headache, dry heaves and left-sided weakness. A CT scan revealed a brain hemorrhage. After being admitted, she was intubated “for worsening mental status.” After further decline, she was diagnosed as “brain dead” on March 18, the day she died. The CDC report does not confirm whether the death was caused by the vaccine, which she received March 6, and then began to feel ill six days later.

Avula’s statement earlier Tuesday did not address how long it would take for J&J vaccine appointments to be rescheduled, but some health districts and departments in Virginia have said they will give Pfizer and Moderna vaccines to people who had appointments this week to receive the Johnson & Johnson vaccine.

“This pause is reassuring in that it demonstrates that the systems that are in place to monitor vaccine safety are working. We look forward to a thorough review by federal health officials. Meantime, we will continue Virginia’s vaccine rollout at this time with the other two authorized vaccines, developed by Pfizer and Moderna.”

The Food and Drug Administration and the Centers for Disease Control and Prevention said in a joint statement that the agencies are recommending a pause in the vaccine’s use, and they will not be offering J&J shots at federal clinics. Other states, including Ohio and Virginia, have followed suit in the hours after the announcement, advising health practitioners in their states to stop using the vaccine for now.

“We are recommending a pause in the use of this vaccine out of an abundance of caution. Right now, these adverse events appear to be extremely rare,” read the statement from Dr. Peter Marks, director of the FDA’s Center for Biologics Evaluation and Research, and CDC Principal Deputy Director Dr. Anne Schuchat.

J&J’s vaccine ran into trouble earlier this year when a batch of 15 million doses had to be thrown out after it was discovered ingredients were incorrectly mixed at the Baltimore-based pharmaceutical plant Emergent BioSolutions. 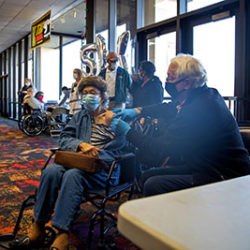 COVID roundup: Most of Va. is now in vaccine phase 2

NoVa, Peninsula, Hampton still in first phase, but will progress by Sunday 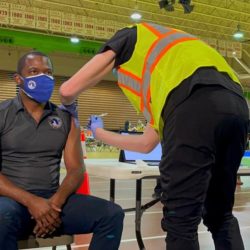 Restrictions to be eased April 1