Bringing international companies to Loudoun County is an ongoing focus for Buddy Rizer and his staff in the Department of Economic Development.

That’s why they are excited about Germany-based Biogrund’s decision to open its U.S. operations in the county. “We have been proactively seeking international companies,” says Rizer, noting he’s also pleased that Biogrund is a pharmaceutical firm. “We hope to grow that category. We haven’t had many pharmaceutical companies come here. We think this will be a good jumping off spot for us.”

The deal is an offshoot of the county’s “sister county” partnership with Main-Taunus-Kreis in Germany, a district that sits between Frankfurt and Wiesbaden. The two areas share similarities in landscapes and lifestyles. “Loudoun is very close to our area in Europe,” says Felix Specht, managing director of Biogrund U.S. Inc.

Biogrund’s parent company is located in the small town of Huenstetten, Germany, not far from Frankfurt. The company works with pharmaceutical and related companies in developing and producing of solid oral dosage forms such as film and sugar coating.

Loudoun began working with the parent company in 2011 after learning it was interested in opening a U.S. office. “Coming to the U.S. was very important,” Specht says. “There are a lot of big, multinational pharmaceutical companies that have development in the U.S.”

The county wasn’t on the company’s radar in the beginning. It first looked at locations in New Jersey. “Most of our customers were situated there,” Specht says, noting that the company also looked at Chicago and the Philadelphia area. Loudoun was the fourth location to be considered.

The company liked Loudoun’s central location on the East Coast with access to major interstates and airports. “You can cover both the South and the North,” Specht says. “We have a lot of customers in the New Jersey area, and it’s easy to get to them in a three-hour drive. You can visit two to three customers.”

Biogrund sells in Virginia and the Carolinas as well. “We also serve customers in California,” Specht says. “We are trying to cover all of the U.S., but we are beginning on the East Coast.”

During its selection process, Bio­grund contacted the economic development office in each area it visited. Loudoun’s customer service stood out, Specht says. “They were willing to meet with me immediately. They offered us fantastic service.”

The county assisted the company in finding a location along with contractors it would need to build a facility. Loudoun officials also helped link the company to other services in the area.  “I think Loudoun County is very special,” Specht says. “It’s more important for a smaller company that is coming into the U.S. to get good service rather than have tax benefits. Whenever we have a problem, we can call Loudoun, and they will support us. I don’t believe any European country would give that good support to a company coming to the area.”

Rizer believes Loudoun makes perfect sense for Biogrund and other international companies. “We have the infrastructure that companies need to get started, and [Washington] Dulles International Airport is here,” he says.

Biogrund made a $2 million investment, building an approximately 7,000-square-foot lab and manufacturing facility in the county. It started with four employees — two that were hired in addition to Specht and his wife, Barbara, who works with customer service. “A decision was made to invest low and then invest again after three to five years,” Specht says. “We will be hiring another two people this year. We could have up to 20 employees in five years, but it’s difficult to say.”

Biogrund’s parent company has approximately 60 employees in Germany. When it opened in 1999, it also only had two to three employees. “When I started with the company in 2004 it had 10 employees. I was the eleventh,” Specht says. 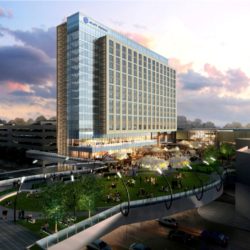