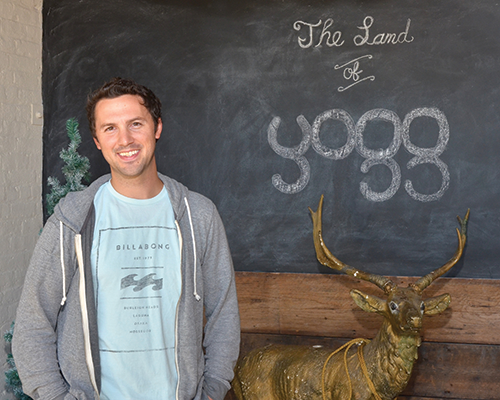 At Land of Yogg, a small, Richmond-based branding agency, everyone is a salaried employee. That will soon change, however, when the firm switches some of its seven employees to hourly pay to comply with a recent change to the U.S. Department of Labor’s overtime rule.

The new rule, which goes into effect Dec. 1, more than doubles the salary threshold at which salaried workers are exempt from receiving overtime pay. After meeting the new salary threshold — $47,476 per year — workers’ duties must still fall under one of the professional exemptions outlined by the DOL.

The potential impact on business of the new DOL overtime rule is one of several issues explored in the 2017 Economic Expectations Survey conducted by the Richmond-based Virginia Society of Certified Public Accountants. More than 300 CPAs from around the commonwealth participated in the survey. A majority of respondents (52.4 percent) said the new overtime rule would have an adverse impact on their clients. (Click here for complete survey results.)

The DOL says the overtime exemption originally was meant for highly paid workers who had better benefits, job security and opportunity for advancement, but the rule’s salary threshold, last changed in 2004 to $23,660, hasn’t kept up with inflation.

“It has only been updated once since the 1970s — in 2004, when it was set too low,” the DOL says. “As a result, the threshold fails to help employers identify workers who are entitled to overtime pay, and it has left millions without overtime protections to which they should be entitled.”

The new requirement, however, poses a dilemma for businesses that can’t afford to raise previously exempt workers to the new salary threshold. The change could affect more than 119,000 workers in Virginia during the first year of implementation.

Under overtime rules, nonexempt employees who work more than 40 hours per week must be paid one and a half times their regular rate of pay for overtime hours. So, if workers are paid $10 per hour, they must be paid $15 per hour for the extra hours.

Adam Mead, the owner of Land of Yogg, says the new rule will require adjustments at his company. “The challenge will be monitoring our current activity to make sure our team gets everything done within 40 hours versus overtime, and if they are doing less than 40 [hours], making sure they take some time off when we’re slow so they can make more money and crank through overtime hours when we do get more projects in,” he says.

Mead says he understands the need for the regulation but says it represents a major change that will take a few years for many employers to get used to.

Increasing regulations
“I find more and more small businesses are affected by increased regulations,” says Alan Witt, a CPA in Hampton Roads who is a partner and CEO at PBMares, an accounting and business consulting company with eight offices in Virginia and one in Baltimore.

Most respondents in the CPA survey appear to share Witt’s view. They say the regulatory environment is having a negative effect on the overall economic climate (67.3 percent).

In addition to offering their views on specific issues, the survey respondents also shared their outlook on the U.S. economy. Most believe the economy has been moving in the right direction, but they are cautious in assessing how it will perform next year.

“CPAs, in general, tend to be predominantly conservative but also fairly optimistic,” says Dave Cotton, CPA, chairman at Alexandria-based Cotton & Co. “Most of us are hopeful that this upcoming [presidential] election — however, it turns out — is going to resolve some of the government gridlock and improve the business environment for us and our clients.” (Read more from Dave Cotton and other CPAs on the 2017 Economic Expectations Survey.)

American consumers also appear to have a positive, yet cautious, outlook about the economy. According to the latest Consumer Confidence Survey, issued monthly by The Conference Board, the Consumer Confidence Index rose to 104.1 in September, the highest level since the Great Recession.

“Consumers’ assessment of present-day conditions improved, primarily the result of a more positive view of the labor market,” Lynn Franco, director of economic indicators at The Conference Board, said in a statement. “Looking ahead, consumers are more upbeat about the short-term employment outlook, but somewhat neutral about business conditions and income prospects. Overall, consumers continue to rate current conditions favorably and foresee moderate economic expansion in the months ahead.”

When asked to rate the overall business climate in Virginia, a majority (66.8 percent) said it was “good,” and only 1 percent said it was “poor.” However, a majority of respondents picked the economy as the biggest issue Virginia is facing in the 2017 state election, in which a new governor will be chosen.

In looking at prospects for their own firms, most CPAs had a sunny outlook for 2017. For example, more than half had “somewhat” or “very” optimistic views for their organizations for next year. More than 46 percent also had a positive outlook about the industry they represent.

A majority of respondents said their companies are finding an adequate supply of talent in Virginia, adding they believe there is an acceptable pipeline of workers to replenish the commonwealth’s workforce. 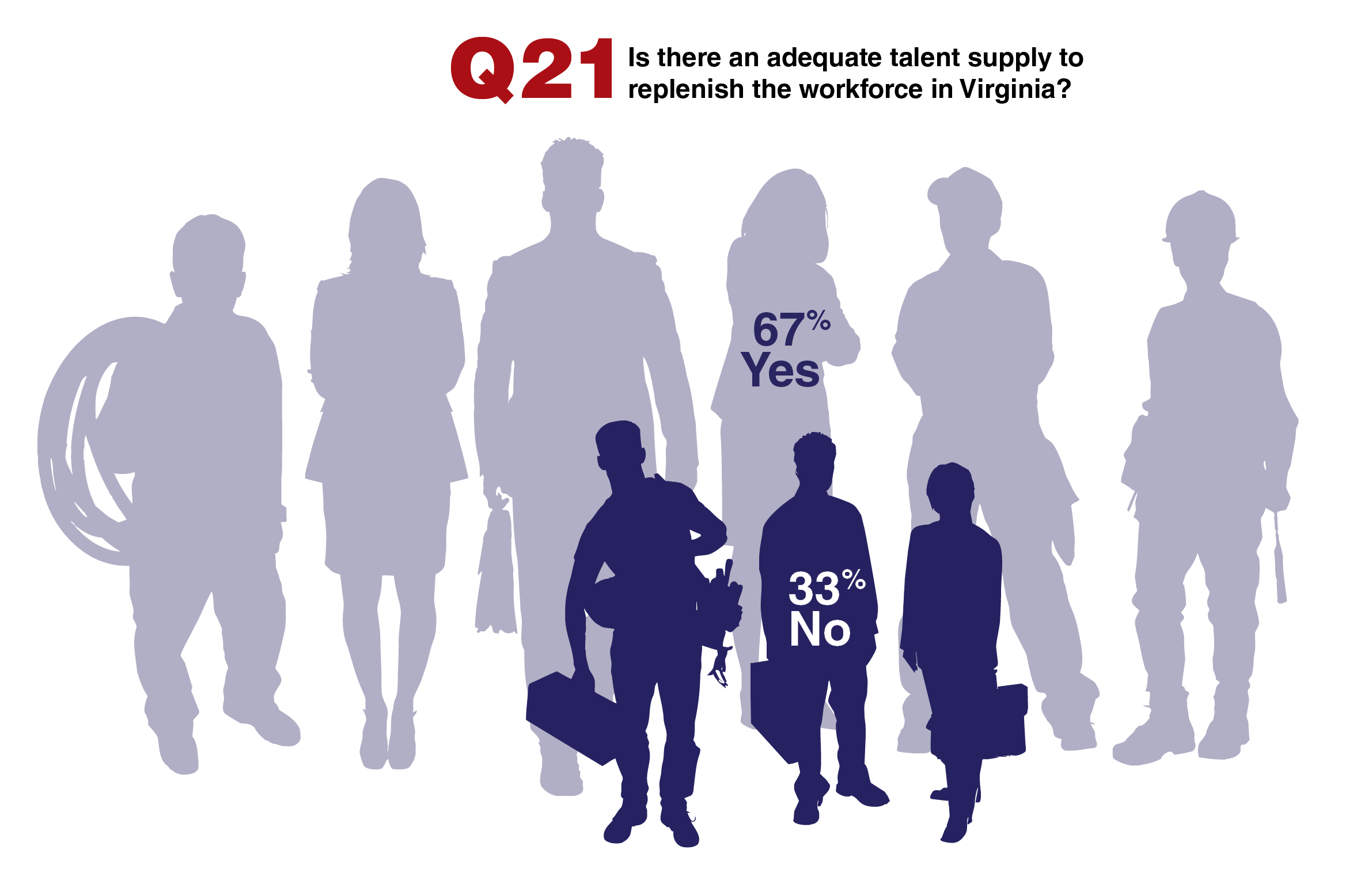 “They really ought to be because the population is aging — we have more older workers than younger workers,” he says. “Generally, there is a great concern, just about everywhere, about who is going to do the work in 20 years when all the baby boomers are retired.”

“Virginia is still catching up from the sequester [across the board federal budget cuts] in 2013-14 when it had almost no [job growth] gains, while the U.S. economy has now started to moderate its high job-growth rates from 2014 and 2015,” Fuller says.  “So, while Virginia may look stronger out of context, it has lagged since 2011 and will look more like the U.S. job growth patterns by 2018.”

One thing Fuller is certain of is Virginia’s continued dependence on federal spending, an opinion shared by most survey respondents. Almost 87 percent of respondents say that the commonwealth has not done enough to lessen its dependence on Washington.

“The state has not completed a shift to a less dependent economy on federal spending,” Fuller says. “It’s less dependent [than it used to be], but it isn’t enough — it isn’t like the rest of the country in that regard.”

Health-care costs haven’t been the biggest issue for Land of Yogg’s Mead this year, but he has seen dramatic swings in medical costs during the past few years.

The agency saw a large, 44 percent increase in health care costs in 2015, not including dental expenses. Medical costs decreased less than 1 percent in 2016, and are expected to increase 9 percent for next year, although the company also plans to offer more than one health care plan for the first time. 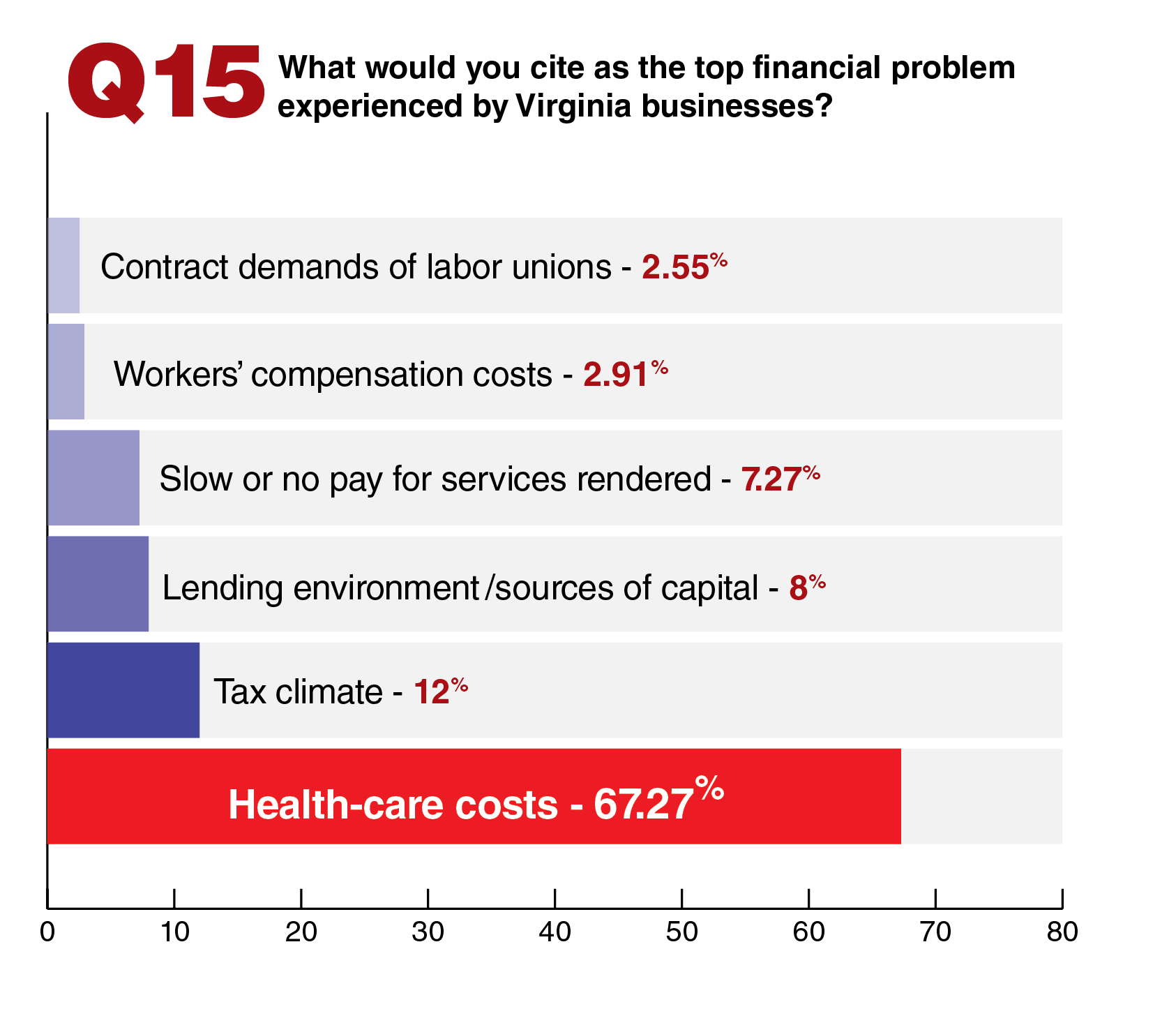 The Alexandria-based Society for Human Resource Management (SHRM), an international organization with 10,730 members in Virginia, says managing health-care costs continues to be a top priority for HR directors, who also must ensure they keep up-to-date with the requirements associated with the ACA.

“We are at that point where most of the [ACA] regulations have already been issued and, now, folks can turn their attention to … honing in with how they are complying with the law,” says Chatrane Birbal, SHRM’s senior adviser of government relations.

While Birbal believes repeal of the ACA is unlikely, she says there have been many changes to the law and more could be on the way. For example, one ACA provision expanded the definition of a small-group employer to include organizations with up to 100 workers (as opposed to 50 employees). President Obama, however, last year signed the Protecting Affordable Coverage for Employees (PACE) Act, which allows states to decide what businesses are considered “small” for health-insurance purposes. (Virginia chose to keep the cutoff at 50 employees.)

Another change is the postponement of the  ACA’s “Cadillac tax” until 2020. The tax, originally set to go into effect in 2018, places a 40 percent excise tax on high-value, employer-sponsored health-care benefits.

“This delay will likely serve as a catalyst in future advocacy efforts to fully repeal the excise tax,” Birbal says. “Additionally, both Republican and Democratic presidential nominees have expressed support for a repeal of the 40 percent tax.”

Challenges ahead
The ACA is not the only law facing opposition. Several bills have been introduced in Congress to delay or change the new overtime rule. The House of Representatives has passed a bill (HR 6094) seeking to postpone the new rule by six months, but Obama says he will veto the legislation if it crosses his desk. 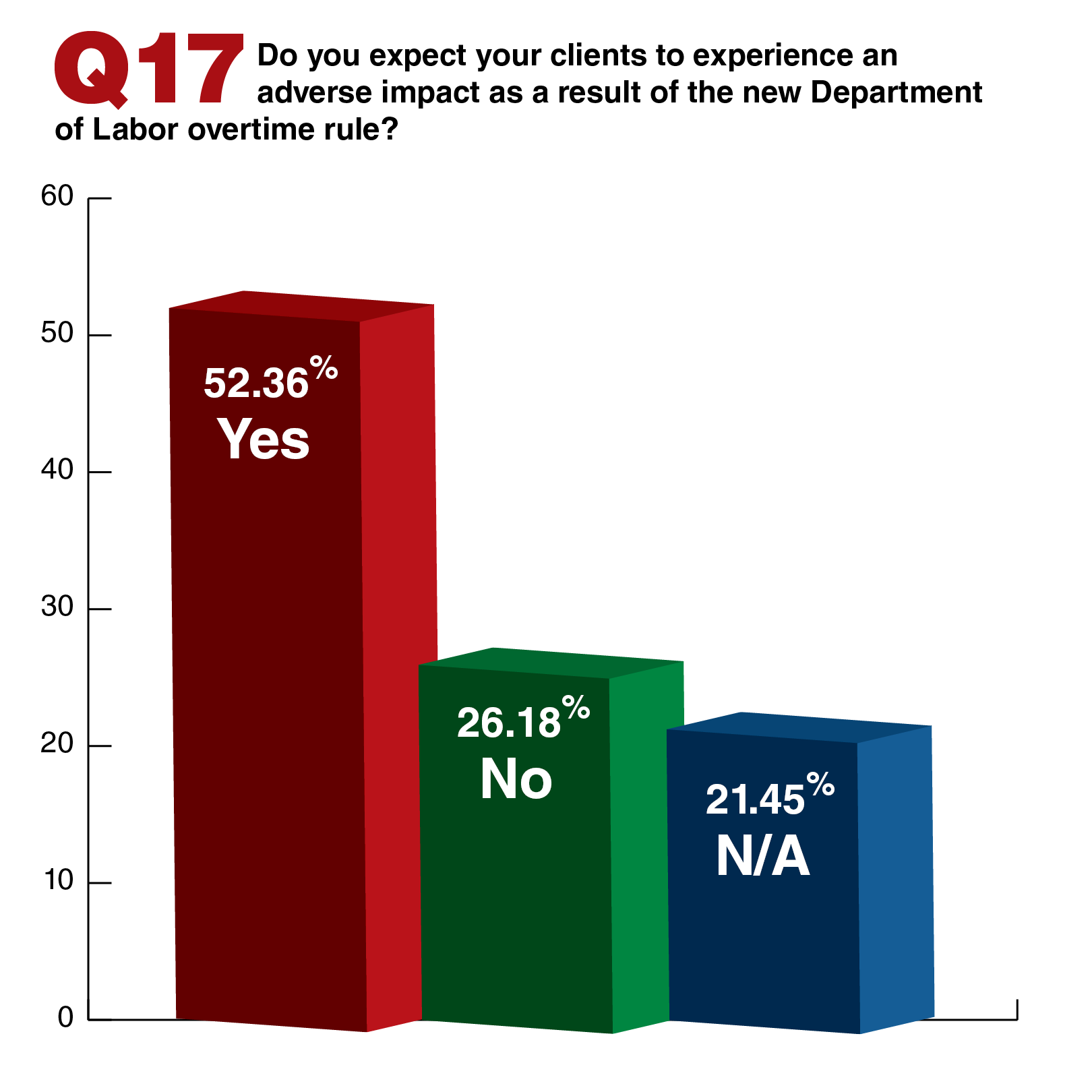 Twenty-one states also have sued the Department of Labor in an effort to prevent the rule from taking effect. Virginia is not one of the plaintiffs. The U.S. Chamber of Commerce and more than 50 business groups also filed a separate lawsuit challenging the regulation.

“The DOL went too far in the new overtime regulation,” Randy Johnson, senior vice president of Labor, Immigration and Employee Benefits for the U.S. Chamber, said in a statement. “We have heard from our members, small businesses, nonprofits and other employers that the salary threshold is going to result in significant new labor costs and cause many disruptions in how work gets done.”

SHRM hasn’t filed a lawsuit but supports the Overtime Reform and Enhancement Act (HR 5813) sponsored by U.S. Rep. Kurt Schrader (D-Ore). The bill would phase in the new salary requirement over four years and eliminate an automatic increase to the salary threshold every three years established under the new regulation.

“In the past, this salary level has always been set through notice and comment, and for the first time now [the government] is saying ‘we don’t want to bother with that. We want it to automatically adjust every three years,’”  explains Nancy Hammer, SHRM’s senior government affairs policy counsel. “Our concern with that is there could be something going on in a particular industry, or with the economy that we need to take into account, and it’s just not the way things are done, and we don’t think the statute supports it.”

For now, however, it looks like the overtime regulation is one of many issues that businesses will have to deal with.

It’s a burden that’s tough to bear, says Deb Peery, owner of The Primrose School of Midlothian Village, a preschool and childcare center in Midlothian with 38 employees. Peery is dealing with higher health-care costs in addition to complying with the new overtime rules, which will affect four employees. She says employers want to do the right thing for their customers and workers, but that is a difficult task when revenues aren’t increasing at the same rate as compliance costs.

“At some point there is going to be a tipping point with some small businesses, and it’s going to put them out of business,” she says. “It’s scary.  It’s not fun being a small business owner too much anymore.”

Ferguson is relocating its national sales center to Hampton