Things are changing at Radford University. If the university’s last administration was known for leading a transformative building boom — more than $300 million in facilities were added in 11 years — the focus of the current administration is reaching out to Radford’s stakeholders.

“And in looking forward, I knew it would be important for me to look at how we begin to connect with our faculty, our staff and our students.”

Hemphill began that process by holding open forums soon after he arrived on campus in July 2016.  He met with representatives of each college in the university. That led to meetings with faculty in all 37 departments “to hear in their own words some of the strengths, weaknesses and some of the things we need to think about as a university.”

Good reviews from faculty
The faculty seems to appreciate Hemphill’s approach. Every two years, an internal faculty survey asks faculty to rate their responses to a series of statements on a scale from 1 to 5. This year, Hemphill scored very high in response to such questions as, “The president values faculty opinion, “I am satisfied with the leadership of the president,” and  “The president does all she/he can to meet the needs of our university.”

Every new president gets what Faculty Senate President Jake Fox calls a “honeymoon bump” in these surveys, reflecting optimism about a new administration. Yet Fox says the reaction to Hemphill is more than that.

Hemphill has earned that positive response, Fox says,  by meeting with faculty members, learning their names, responding to their emails and working hard to get their support. Hemphill’s administration has begun working through a backlog of Faculty Senate resolutions.

Some of them, Fox says, have been on the provost’s desk for three or four years. “It’s a real change in atmosphere and you can feel it on the campus,” Fox says. “It’s just a different environment.”

More demands and questions
Radford may need every bit of that goodwill and open communication at a time when society is making more demands on higher education while also questioning the value of a college degree.

The commonwealth has set a goal to become the best-educated state in the nation by 2030. Nonetheless, an on-campus task force warns of a growing tide of anti-intellectualism. In addition, a recent Pew Research Center poll shows that 58 percent of Republicans and

Republican-leaning independents say colleges and universities have a negative effect on the country. On top of those trends, everyone is worried about rising college costs.

“That’s a fact that we’re facing a value proposition in higher education,” Hemphill says. “More people are asking if college is worth the cost, and many of them are saying it’s not. At the same time, employers are saying they need more workers with more and better skills.

Higher graduation goals
Graduation rates, of course, are one way to measure a university’s success. According to the State Council of Higher Education for Virginia, nearly half of the students who entered Radford in the 2010-11 academic year graduated in four years; and 72.6 percent of them earned their bachelor’s degrees in six years. That’s considerably better than the 62.7 percent six-year graduation rate for the class that entered Radford in 2005-06, but the university aims to drive it higher.

It will have to if Virginia is going to achieve its goal of having 60 percent of its working-age population with at least an associate degree by 2030. The Virginia number now is 46.6 percent, but it stands at only 31 percent for non-Asian minority residents and just 27 percent for people in  rural areas, such as the Appalachian region where Radford sits.

Improving its retention rate — the percentage of students who decide to continue their college careers — is one step toward improving graduation rates. Radford has already made some progress there, improving 3 percentage points, to more than 77 percent last year.

Strategic plan
A task force of more than 180 students, faculty, administrators, staff members and community representatives began working on Radford’s next strategic plan last October. The draft is scheduled to go to the board of visitors in September, with approval of a final version expected in December. That’s when the plan will be released to the public, Hemphill says. “It will be a very public document with a very public evaluation.”

While the document isn’t complete, its Challenges and Opportunities Subgroup indentified a half-dozen themes in March, including shifting attitudes about education’s value and purpose and, of course, its cost.

“The anti-intellectualism displayed by some may place more emphasis on one of higher education’s goals, preparing students for a career, while devaluing other equally important outcomes such as learning to think, valuing diversity, having a global view or becoming outstanding citizens,” the subgroup’s report says. “For example, the fine arts and humanities may be less valued than more explicitly career-oriented and technical fields. Radford University will need to address these challenges and the ongoing shift in cultural values.”

The liberal arts aspect of a Radford education is important, Hemphill says, but, “we also receive pressure as it relates to STEM and other key areas in terms of preparing students for the workforce, and we have to make sure that we’re finding our balance, that we’re respecting our tradition of who we’ve always been in terms of teaching excellence but also focus on making sure that we’re being responsive to some of the requests that we’re receiving from business and industry, from the General Assembly and other groups out there.”

Responding to those requests and pressures may mean restructuring how education is delivered and measured, Hemphill says.

“We still very much have, for the most part in higher education, this industrial model of delivery, when you’re talking about seat time, when you’re talking about 120 hours to earn a degree, and we find ourselves in a society that’s moving at the speed of light, which I refer to as a post-industrial society,” he says. “And are we really responding? Are we looking at accelerated degree programs that will allow people to work from a self-paced standpoint that’s much more affordable, that will drive affordability? Are we looking at how we are reaching out to populations that historically are not being served?”

There are at least 28 million people in the United States with some college credit, but no degree, Hemphill says. What are colleges and universities — particularly his university — doing to reach them? “We just have to be more nimble as an institution,” he says.

Proximity to Tech
Hemphill believes Radford is well-positioned to deal with the tumult in higher education, in large part because of what he sees as the faculty’s understanding of the importance of innovation and the administration’s desire to join in and support innovation. Radford already is more nimble than some institutions, he says.

Radford also is near Virginia Tech, and sometimes has seemed to live in Tech’s shadow. In fact, for more than two decades, Radford was part of Tech, its  Women’s Division.  Hemphill sees the proximity to Tech as an opportunity. “We both have a unique mission to serve the commonwealth of Virginia,” Hemphill says. “That’s what the focus should be. How are we serving the commonwealth? How are we serving this region? How are they serving the world?”

Hemphill’s description of Radford’s relationship with Tech sounds a lot like his description of his connection with Radford University stakeholders: “It’s about how we can lock arms and work together.”

An author who’s written about a number of topics related to higher education, Hemphill came to Radford after four years as president of West Virginia State University, a historically black college that began as the West Virginia Colored Institute, a land-grant institution founded in 1891.

In 2016, more than 53 percent of West Virginia State’s students were white. Its graduates include Katherine Johnson, recipient of the Presidential Medal of Freedom and one of the women whose work at NASA was chronicled in the book and movie “Hidden Figures.”

Hemphill and his wife, Marisela Rosas Hemphill, have four children. 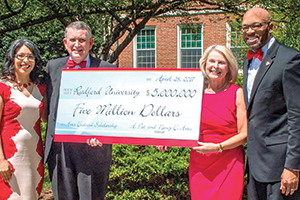 In April, less than a year into Brian Hemphill’s tenure as Radford University’s president, the university received a $5 million gift from Nancy and Pat Artis. Nancy Artis graduated from Radford in 1973, making the gift the largest Radford has  received from someone who earned a degree there.

The gift will create and sustain the Artis Endowed Scholarship Fund, which will award $3,000 scholarships to 67 Artis Scholars each year.

Senate Faculty President Jake Fox, an assistant professor of anthropology, points out this isn’t the first time the Artises have supported Radford’s College of Science and Technology.

“They’ve supported our college with many gifts before this,” Fox says, “but this was a doozy.”

In recognition of the gift, the college has been renamed the Artis College of Science and Technology.