Lynchburg College will become a university next fall

Kenneth Garren, at 77 one of the oldest college presidents in the nation, recalls the admonition of a history professor in describing the challenge facing Lynchburg College.

“He said it wasn’t the fastest or strongest who survived through the ages. It was the one who changed with the environment. Well, folks, the environment is changing, and we need to be changing with it,” Garren says.

Garren, in his 17th year as Lynchburg’s president, says it has been functioning as a university for a long time, with more than a dozen master’s degrees and three doctoral programs.

Fierce competition
The Lynchburg president says it is also no secret that there is a fierce competition among colleges for students.  Studies project that the pool of high school graduates will decline about 10 percent nationally over the next decade.

International students also have become the focus of a growing number of institutions who are trying to fill the seats in their classrooms.

Garren says he knows through research and personal experience that most international students believe that a college is like a high school, not an institution of higher education.

Becoming a university, he says, will give Lynchburg a better opportunity to recruit international students.

Garren also believes the years ahead will be a trial for many colleges. “Some of the schools are going to go out of business. And, I’m not the first person to say it, and not even the most recent probably,” he says

The Lynchburg president keeps up with how his Virginia private school competitors are doing by tracking student deposits through the Council of Independent Colleges in Virginia.

“Of the 17 [institutions] who had reported their numbers this last time [in September], more than 50 percent of them had a drop in deposits. Ours were up 4 percent.

“There were nine that had gone down. Of those nine, six had double-digit [percentage]drops in their deposits,” Garren says.

Vision 2020
Lynchburg’s transition to a university, and to a larger student body, is riding on an ambitious strategic plan — Vision 2020. 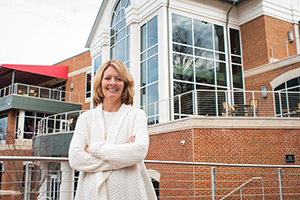 Sally Selden, the college’s vice president and dean for academic affairs, says creating more graduate programs and recruiting more graduate students in areas that serve the region — such as health sciences — are important initiatives in the Vision 2020 plan.

During the past five years, Selden says, the number of graduate students has increased about 40 percent, with a 20 percent jump this fall compared with a year ago.

“We don’t want to change the heart of who we are,” Selden says, referring to the exponential growth of the graduate student population. “We want to remain a very student-centered institution.”

Building projects
A cornerstone of the college’s strategic plan is construction of new residence halls, science labs and athletic facilities while making technological upgrades to maximize student engagement.
Garren says an upcoming feasibility study will determine what the plan will cost, including a possible boost in Lynchburg’s current endowment of $108 million.

After that, the college’s board of trustees will decide how big a fundraising campaign it’s willing to take on with the help of alumni and friends.

The board already has approved construction of a residence hall currently estimated to cost $20 million, Garren says. It will provide space for a new honors college, with living arrangements for about 270 students.

The residence hall will complement recent improvements. They include an upgrade of the college’s principal athletic field (for $3.7 million in 2012), a new student center ($12 million in 2014) and a floor-to-ceiling renovation of the dining hall ($1.5 million in 2015).

Natalie Deacon, 23, of West Chester, Pa., a graduate student in nonprofit leadership studies who also earned an undergraduate degree from Lynchburg, says it was not facilities that drew her to the college.

“If we start building these elite high-caliber buildings [in the Vision 2020 plan], I think that’s going to really enhance our ability to attract good students here and give students the very best possible experience.

“We always use the line that we’re ‘a college that changes lives.’ Maybe we need to build a building that’s going to change a life, and I don’t think we quite have that yet.”

Transformative effect
The son of a bus driver whose parents never got beyond the seventh grade, Garren has experienced firsthand the effect that education can have on a person’s life.

His eyes teared as he recalled how his older brother, a student at Highland Springs High School in Henrico County, won a college scholarship when a school principal urged him to take a competitive exam offered by the University of Richmond.

“My brother would not have been selected for that exam, otherwise. He was working 20 hours a week in a grocery store, because we were poor. But the principal said, ‘I saw something in that young man, I want him to take the test.’”

Awakened to the transformative aspects of higher education, Garren followed in his brother’s footsteps, majoring in physics and mathematics and earning advanced degrees. Garren worked in the space program at NASA before shifting to higher education.

He believes every student who has the will and ability — no matter his or her family’s finances — should be able pursue higher education.

“That’s what motivates me to go out and talk to people about why Lynchburg College needs their money. Because when it’s about endowment and scholarships, it’s not a theoretical discussion,” Garren says. 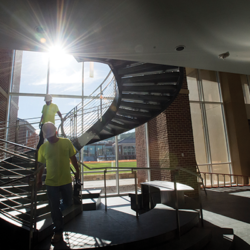 A vision comes to pass

Liberty University has transformed itself into Virginia’s biggest school