Editors's note: This story has been updated.

A new survey by the Consumer Energy Alliance shows that a majority of voters polled in Virginia, West Virginia and North Carolina support the expansion of domestic energy production, including construction of the proposed Atlantic Coast Pipeline (ACP).

The poll, conducted from May 9 -11, of registered voters (400 voters in West Virginia, 500 in Virginia and 660 in North Carolina) showed support at a time when environmental groups are ratcheting up their concerns and gubernatorial candidates in Virginia are staking out their positions on the $5.1 billion, 600-mile pipeline.

The ACP would transport up to 1.5 billion cubic feet of fracked natural gas per day to customers in Virginia and North Carolina.

Harrison Hickman of Hickman Analytics Inc., the firm that did the polling, said the sample was selected so registered voters from all parties were equally likely to be contacted. Since some voters, which included Democrats, Republicans and Independents, responded “don’t know” or “neither,” the numbers don’t add up to 100 percent.

The CEA conducted a similar poll in 2015. It resulted in a similar outcome, although support for the massive ACP has dropped somewhat in all three states. For instance in 2015 in Virginia, the number was 56 percent in favor, or two percentage points higher. In West Virginia, 70 percent approved in 2015, as compared with 60 percent in the more recent survey. In North Carolina, the figure was 55 percent in favor, compared to the current 52 percent.

Asked about the decline during a press call on the new poll, Hickman attributed the drop to registered Democratic voters, whom he said have become slightly more opposed to pipeline projects in general since the Obama administration declined the certification of the Keystone pipeline.

The CEA said that pipeline, which President Trump supports, also garnered a majority or plurality of support from surveyed voters in all three states.


The CEA is a nonprofit trade group, based in Houston, that represents more than 450,000 members nationwide that include oil and gas companies, manufacturers, chambers of commerce, agribusinesses and utilities,  including Dominion Energy – the lead developer behind the ACP, and Piedmont Natural Gas, one of its pipeline partners. The group said that it commissioned the poll on behalf of all its members, which includes the Virginia Manufacturing Association and the Virginia Chamber of Commerce, supporters of the pipeline who also participated in yesterday's call.

Hickman said the polling was done to examine how much support the ACP, Keystone pipeline, offshore production and other key energy issues have among voters and what role energy issues could play in the 2018 midterm elections.  ”We asked would you be more likely to support a candidate who supports natural gas projects such as the pipeline? In all three states, by a margin of at least 20 percent, registered voters support candidates who support these projects,” Hickman said. “Large percentage of voters say that energy issues will be very important when they are voting.  Those are the critical findings.”

Other key findings from the poll:


• Across all three states, about two-thirds of voters believe pipelines are the safest means for transporting natural gas.
• At least 80 percent of voters in each state say energy issues are very or somewhat important in their voting decisions.
• Candidates in next year's midterm elections will need to take a strong stance on pipeline construction and energy development.

In Virginia, where both Democratic and Republican primaries for the fall gubernatorial race will be held on June 13, one candidate is trying to make the pipeline a hot button issue. Democrat Tom Perriello, a former congressman who’s running on a progressive platform, has come out against the ACP. He and other  candidates for the Virginia House of Delegates, say they will refuse political donations from Dominion Energy, the state’s largest utility, and its top corporate campaign donor.

Perriello’s opponent, Lt. Gov. Ralph Northam, has remained mum on the pipeline issue other than to note that pipeline projects, including the ACP and the proposed Mountain Valley Pipeline, should garner strict environmental reviews.

Republican candidates Ed Gillespie and state Sen. Frank Wagner (Virginia Beach), who have accepted donations from Dominion, say pipelines would be good for the economy. The third Republican contender, Corey Stewart, has been critical of Dominion and says on his website that the General Assembly gives too much eminent domain authority to private companies, which assails people’s property rights, another issue that has surfaced during the pipeline debate.

Even Dominion Energy’s Chairman and CEO, Thomas F. Farrell II, has jumped into the fray. Last week, The Washington Post reported that he sent a letter on May 12 about the upcoming primary to the company’s 76,000 employees, retirees and shareholders in Virginia. In the letter, which the Post published, Farrell urged people to vote in the primary and to take the time to see where candidates stood on critical projects such as the ACP, which Farrell described as “one of the largest and more important projects our company has ever undertaken.”

Dominion Energy also weighed in on the CEA poll with a statement Monday. “While a small minority of opponents has received disproportionate attention, the vast majority of people in the region want to see this pipeline built. Their voices deserve to be heard. … They understand that it takes new infrastructure like the Atlantic Coast Pipeline to make that possible. We’re also encouraged by the support of more than 25 local governments, more than 250 business and labor organizations and the bipartisan leadership of all three state legislatures.”  Virginia Gov. Terry McAuliffe is among those supporting the pipeline.

The ACP remains under environmental review at the Federal Energy Regulatory Commission (FERC), the body that will vote on the project once it has a quorum. Currently, the five-member commission has only two members, and it needs three for a quorum, according to FERC spokeswoman Tamara Young-Allen. President Trump has submitted two nominees so far, and they must go through Senate confirmation hearings. Then, the new commissioners would need to review a record on the pipeline of hundreds of thousands of pages of documents and comments by interested parties and shareholders.

“There’s no telling when the chairman will set the agenda,” said Young-Allen. “Trump still has to nominate one more person, and even if the other two get confirmed rather quickly, they would need to read the records in the case and get up to speed.”

FERC is scheduled to release its final environmental impact statement on the ACP on July 21st. The pipeline, if approved, was originally slated to go into service in 2019.

Monday’s press call included comments from Barry Duval, president and CEO of the Virginia Chamber of Commerce, and Brett Vassey, president and CEO of the Virginia Manufacturers Association. “The natural gas that this pipeline will deliver to Virginia will provide affordable, reliable, clean electricity, fuel and raw material for our manufacturing facilities. This supply of natural gas from the Marcellus reserves in West Virginia will allow manufacturers to plan and compete for future investments,” Vassey said.

Justin Meighan, assistant regional manager for the Laborers' International Union of North America Mid-Atlantic region, commented on the many jobs that would be created.  “In addition to lowering energy costs for families and manufacturers and generating millions of dollars in tax revenues for state and local governments, this project will create more than 17,000 high-paying jobs and spur $27 billion in economic activity across the mid-Atlantic,” he said. 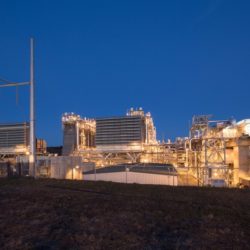