Technologies that seemed futuristic a few decades ago now are commonplace. Computers, the internet and smart devices are business necessities, and it won’t be long before drones and driverless vehicles also will play prominent roles in the economy.

All of these technologies, however, have risks associated with them. Those potential problems, in turn, will affect risk management strategies.

“The problem with futuristic technology is that it is unpredictable,” says Hutch Mauck, president of Lynchburg-based Scott Insurance. “From my perspective, we at Scott completely buy into an exponential acceleration of technology. We know that, in 10 to 20 years, there will be all sorts of advancements and changes that in many cases we are not even thinking about today.”

This unpredictability will create a “greater need for smart, inquisitive risk managers that can see what’s going on in the world around us,” Mauck adds.

851 million records exposed
In terms of technology, the most prevalent risk management threat to companies comes from the “overall connectivity of employees and businesses with devices around the world,” says John Middleton, president of property and casualty insurance for Richmond, Newport News and Norfolk at New York-based USI Insurance Services.

Since 2005 the California-based nonprofit Identity Theft Resource Center has seen a 397 percent increase in data exposure incidents across financial services, business, education, government and health-care sectors. More than 851 million records have been exposed over the last decade. 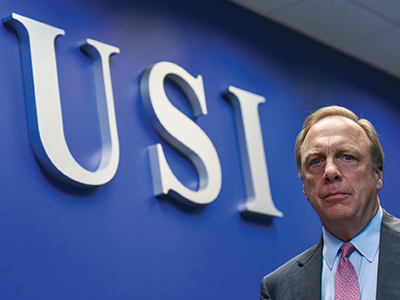 The bad news is that the threat of cyber risks is evolving continuously. “The minute you think you understand all the exposures, cyber criminals come up with a unique way to attack businesses,” Middleton says.

New threats include social engineering schemes. One example is the cyber criminal who steals money and information by impersonating a high-level executive. Hacking the executive’s email, the crook instructs an employee to transfer money to a certain account. “How this [criminal trend] evolves is really important, and underwriters need to continue to respond, offering greater depth and breadth of coverages to respond to new developments from cyber criminals,” Middleton says of cyber crimes.

Cyber and privacy liability have to be considered one of the “greatest risks to a company or an individual,” says John Stanchina, president and CEO of Rutherfoord, a Marsh & McLennan Agency LLC Co. “Businesses have an enormous amount of exposures. They need to protect their business, their employees and their customers.”

Even though more companies are looking at cyber and privacy liability coverage, it is still not a coverage that is commonly purchased. “About 80 percent of companies are thinking about it, but less than 50 percent get it,” says Walter Smith, state insurance president of BB&T Insurance Services Inc.

In other areas, companies such as Airbnb and Uber are using technology to change the travel habits of businesses and consumers.

“Uber doesn’t own any cars. It’s not a taxi service, but it is disrupting the traditional taxi service and limo service in an enormous way,” Stanchina says. “Airbnb is doing the same thing to the lodging industry. Companies using technology and big data in the insurance industry have the ability to be disruptors in the same way. It gives them the opportunity to create products and delivery innovations for clients such as 24-hour, seven-day-a-week access. It will give the client a better experience as well as new products and services.”

Coverage for drones
Technology also plays a role in the popularity of drones. These unmanned aerial vehicles are being used by a growing number of industries, ranging from mining and contracting to surveying and engineering. “In 10 years, they will represent 10 percent of the global civil aviation field,” says Stanchina. “Today there are more than 1 million drones operating commercially. It represents a growth segment over the next 10 to 20 years.”

A few years ago “getting coverage for drones was a Herculean task. Now it’s out there, and it can be obtained,” says Paul Fleming, senior vice president for Henrico County-based Bankers Insurance. “Percentage-wise, there is a big increase in interest in drone coverage. There are not a big number of businesses buying the liability coverage, but there is interest.”

Often businesses will hire a third-party company to take aerial footage with a drone. “We are seeing that with country clubs, large resorts and commercial real estate,” Fleming says. “If you bring in a third party, you want to make sure they have coverage, particularly liability coverage.”

Property, privacy and security coverage also is available for drones. “Any company that is using a drone should be considering all of those coverages in order to adequately protect themselves,” says Mauck.

Currently businesses and state governments are gearing up for one of the newest technologies — driverless vehicles. Companies such as Google, Volvo, Ford and Tesla Motors have been testing driverless vehicles for a couple of years.

“There is a dire prediction that people will get away from cars, but I don’t see that realistically occurring,” says Smith of BB&T. “I am told that driverless vehicles are going to be in regular use in five years. There will be companies that buy driverless cars and also rent them like Uber.”

That’s a reminder that technological innovations can offer benefits as well as risks.