Gary Thomson graduated from college with an accounting degree in 1985.

Looming ahead of him was the CPA exam. Thomson and many other accounting graduates rushed to take the test before the far-reaching Tax Reform Act of 1986 became law.

“We all had a big incentive back in those days to get our CPAs out of the way so we wouldn’t have to be tested on the [1986] tax law,” Thomson says.

Now, more than 30 years later, accountants are being tested again — this time by the 2017 Tax Cuts and Jobs Act, described as the biggest tax overhaul since 1986.

Thomson, the Richmond-based regional managing partner of Dixon Hughes Goodman, says his accounting firm and others still are trying to wrap their arms around the new law. “We just don’t know all there is to know,” he says.

Additional information — on technical corrections, the lawmakers’ intent and the implementation of regulations — all will affect how the law is interpreted. “Until we see some of those regulations, people are going to be guarded about saying, ‘This is absolutely the right answer,’ ” Thomson says.

Challenges, opportunities
In essence, tax clients are looking for clarity from accountants who still are on a steep learning curve. Thomson says that dynamic is creating challenges and opportunities for the profession.

One challenge for accounting firms has been the time devoted to learning the intricacies of the tax law since it was signed into law Dec. 22. “If you look at the number of hours where people had to be redeployed from doing client work to doing this tax work … it definitely has impacted us” in terms of chargeable hours, Thomson says.

On the plus side, the new tax law has given his firm the opportunity to reach out to clients in helping them understand the legislation. That interaction has helped to build trust that likely will lead to more business in the future.

Another plus has been that many companies with their own tax departments have sought help from accounting firms in dealing with the crush of questions the tax law has created. “So, it’s an opportunity for us to get entrée into companies that wouldn’t normally outsource their work or ask for supplemental help,” Thomson says.

Questions at parties
Kelly Nakamoto, CPA, the mid-Atlantic tax leader for PricewaterhouseCoopers LLP (PwC),  says that — because everyone from partners to first-year accountants are challenged by the tax law — it has created “a leveling” up and down the chain of command. “We’re all having to learn the new rules,” she says.

Although poring over tax legislation is not an awe-inspiring activity for most people, the level of excitement at the firm has risen as accountants scramble to understand the legislation, Nakamoto says.

In addition, she says, clients are asking for immediate help, placing increased pressure on tax practitioners while trying to deal with the stress of the current tax season.

If all that were not enough, Nakamoto and other accountants also say they have been fielding tax questions at social events. “The curiosity level of friends and families and other colleagues has absolutely heightened,” she says. 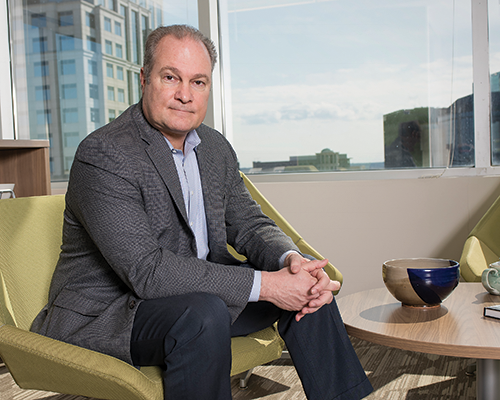 Paul DiNardo, CPA, a principal with Wall, Einhorn and Chernitzer in Norfolk, says that in the closing days of 2017, just after the tax law was passed, requests for accounting advice suddenly spiked. Phones began ringing. Emails and texts surged. “What this law did was to put a number of our clients into a panic before year’s end,” DiNardo says.

Most of those clients had the same question, “How does this apply to me?”

DiNardo says that his firm had been following various versions of the tax bill through Congress. When the House and Senate reconciled their differences in the final bill, accountants scrambled to advise their clients on issues such as prepaying certain taxes and choosing when to make charitable gifts.

“Accountants are introverts by nature,” DiNardo notes. Leaving their offices to meet with clients required some accountants to make adjustments. The effort, however, was necessary to assure clients they are important. Many times clients will leave CPA firms because they don’t see their accountants often enough. They begin to think, “My accountant doesn’t care about me,” DiNardo says.

Ryan McEntire, CPA, who leads the Lynchburg office of the Roanoke-based Brown Edwards & Co., says that with tax changes, “we get used to delivering both good and bad news,” he says.

While most of the news for clients is good under the tax law, sometimes it isn’t good, and every accountant has to be prepared for that.

Offering resources
To help its members understand the tax law, the Virginia Society of CPAs has established a resource center on its website. It provides an overview of tax changes plus a list of online education offerings.

“In addition to the online resource center, the VSCPA held an in-person, tax-reform update seminar in January and had more than 600 attendees,” says David Bass, the society’s public affairs and communications director.

Seth Davis, CPA, a partner with Dixon Hughes Goodman, is the incoming chair of the VSCPA’s Tax Advisory Committee. In addition to helping Virginia CPAs, his group has been educating legislators on the possible effects of the tax law on the commonwealth and its economy.

Overall, Davis says, the law’s lower corporate tax rate could lead to more investment in Virginia. But, he adds, the stock market and other variables also could come into play.

What is certain, he says, is the new tax law is on people’s minds, putting accountants in the spotlight. That, Davis says, is a new experience for his profession.