Updated Thursday, July 23: Sen. Amanda Chase demands an apology from the chamber, says they never told her why she was disinvited.

The Northern Virginia Chamber of Commerce rescinded a speaking invitation this month to state Sen. Amanda Chase, the controversial Chesterfield County-based politician who is seeking the 2021 GOP nomination for governor, with the chamber’s newly installed chairman, Kathryn Falk, saying the chamber condemns “statements and actions by Senator Chase and any person who attempts to divide us, playing on people’s fears and appealing to bigotry and hate.”

Falk, the vice president and market leader for Cox Communications’ Northern Virginia operations, became the chamber’s chairman on July 1. In a statement released by the chamber Wednesday, Falk said that former chairs of the chamber’s board of directors wrote to the body, asking its political action committee to withdraw its speaking invitation to Chase, who is currently the only Republican who has declared their candidacy for governor.

As state senator representing the 11th District since 2016, Chase is best known for her defense of gun rights and her combative political image, drawing comparisons to President Donald Trump, whom she strongly supports. In 2019, Chase was kicked out of the Chesterfield County Republican Party over a series of public attacks on county Sheriff Karl Leonard, also a Republican. She also made news in March 2019, when video emerged of Chase cursing at a Capitol Police officer who wouldn’t let her park in a secure area near the Virginia State Capitol.

Falk’s statement, which was also signed by the chamber’s president and CEO and the rest of the board’s leadership, refers to Chase’s “recent actions and statements related to the removal of Confederate monuments, ‘white history,’ statements about State Senator Jennifer McClellan, and Senator Chase’s actions to aggressively spread a hoax that rioters were crossing the James River to attack the white citizens of Chesterfield County.” Falk said that former chairs of the chamber asked June 28 for the chamber to “publicly repudiate” these statements by Chase.

Since declaring her run for governor in February, Chase spoke to a group of 250 Second Amendment activists at the Capitol, a group that included some self-identified white supremacists. At the July 4 event, Chase defended the Confederate flag as a “cultural symbol more than a historical or divisive one” and said she did not want to see Confederate statues removed, although she advocated for the addition of statues of African Americans to bring balance to Monument Avenue. However, she said in a Facebook live video in June that Gov. Ralph Northam’s attempts to remove the Robert E. Lee monument was “erasing the history of the white people.”

Chase has made other statements on Facebook that have drawn criticism, including a since-deleted post that said state Sen. Jennifer McClellan, a Democratic candidate for governor, “is NOT for ALL Virginians,” partly based on her position as vice chair of the Virginia Legislative Black Caucus, and a warning that Chesterfield residents should be on alert that anti-fascist activists, or Antifa, were planning to target shopping centers in the county in June, saying that the county police chief had shared the information. Later, Chief Jeffrey Katz said he had not spoken with Chase about any threats.

“Going forward, we want to make it clear to any candidate seeking office in Virginia that we will not tolerate, either overtly or subtly, any statements or actions that are inconsistent with the Chamber’s core values, our commitment to racial justice, and our efforts to stamp out racism, discrimination, and prejudice,” the chamber statement said.

A chamber newsletter this spring advertised a roundtable “policy lunch” with Chase, to be held via live webinar on July 8.

The chamber confirmed Thursday that the webinar scheduled on July 8 did not take place, and the invitation was rescinded in advance of the event.

GOP gubernatorial candidate says chamber made defamatory statements about her 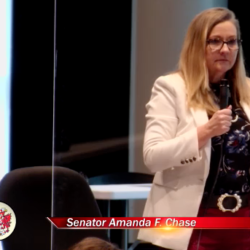 Judge throws out Chase's lawsuit against Republican Party of Virginia 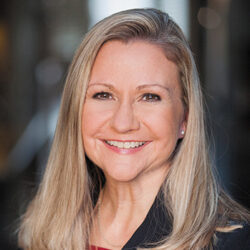