A new economic initiative took up only a few lines in this year’s budget bill, but its impact is galvanizing hundreds of business leaders around Virginia.

Momentum behind the Virginia Initiative for Growth and Opportunity in Each Region  — GO Virginia — is accelerating rapidly. The initiative encourages regional cooperation on economic development projects ranging from joint site development to workforce programs aimed at closing the skills gap.

GO Virginia was created by legislative framework in the 2016 General Assembly session and survived the budget ax in a year when the state government was facing a $1.25 billion shortfall.

The program will receive $28 million in the current two-year budget. That is down from $36 million the program was slated to receive last year. Gov. Terry McAuliffe originally had proposed cutting $15 million from last year’s funding plan, but the General Assembly restored half of that, $7.5 million. “We’re creating more higher paying jobs and incentivizing collaboration, primarily from out-of-state revenue, to diversify the economy in every region of the commonwealth,” says John “Dubby” Wynne, chairman of the 24-member GO Virginia board, which will oversee grants distributed by the program.

Work on the program is escalating quickly. This spring, more than 300 people attended the GO Virginia Orientation Conference in Richmond. Nine regional councils, which were certified by the GO Virginia board in April, are preparing funding requests to develop regional economic diversification plans that will govern how the program’s money is spent. 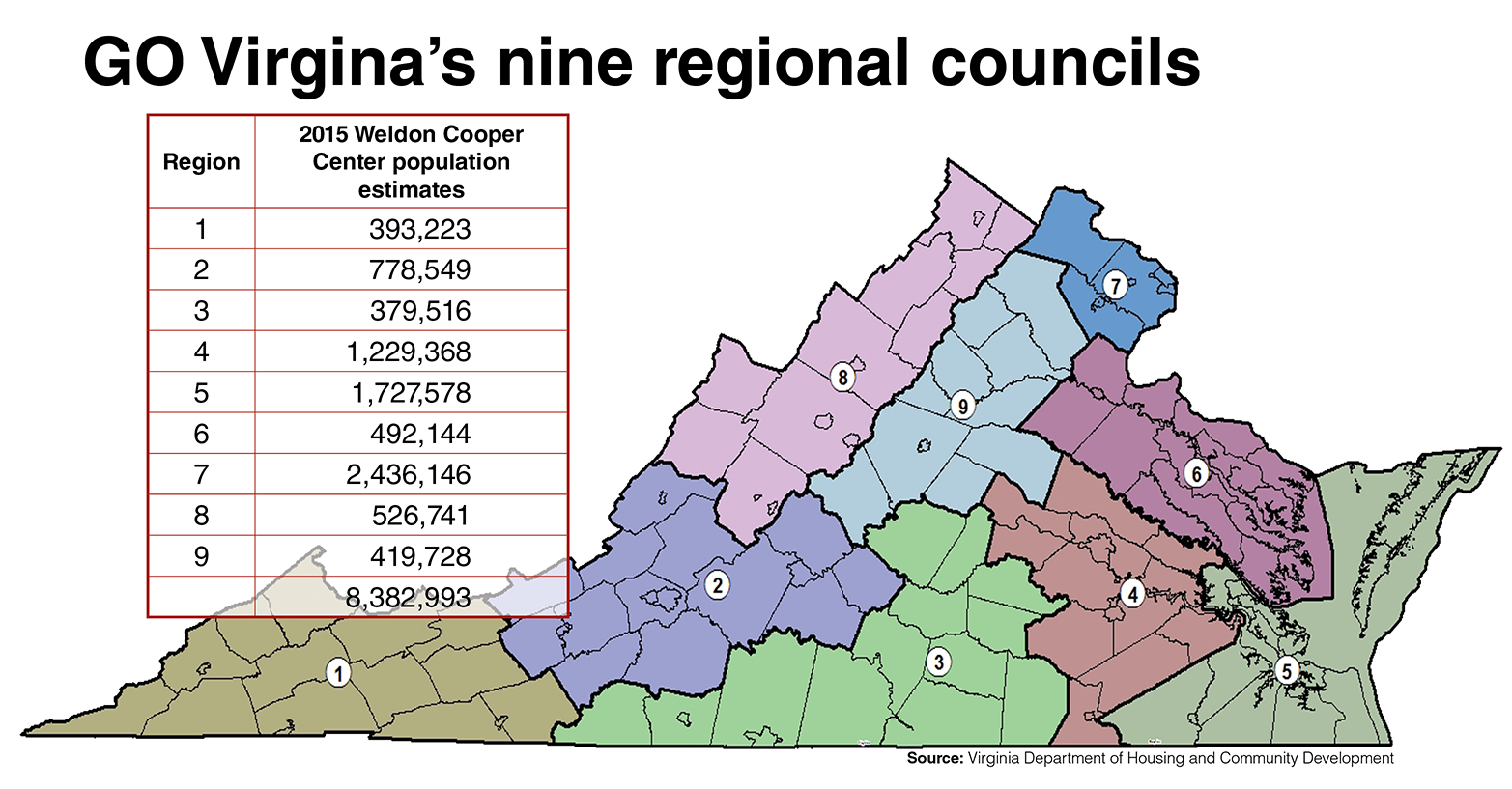 The regional priority plans will be submitted to the GO Virginia board starting in late summer for approval. “We’re going to use those priorities outlined in those plans — which are deep-thinking and data-driven — as the milestones against which every grant submission should be judged,” says Wynne.

After that, localities can begin to apply for grants.  “I think GO Virginia legislation could be the most transformational legislation to help economic competitiveness in 20 years,” says Barry DuVal, president and CEO of the Virginia Chamber of Commerce. The chamber plans to incorporate the regional plans into its Blueprint Virginia 2025, a business plan for the commonwealth that the group is updating.

So what programs are likely to be funded? “Creativity is the only limitation here,” says Wynne.

Under the program, localities can work together to apply for grants on projects aligned with plans developed by the regional councils. The projects likely will fall into efforts such as workforce development, business incubators and accelerators, joint site development and scale-up programs for small and midsize businesses. The legislation specifies that early efforts should be placed on addressing skills gaps in the workforce.

Grant requests must come from at least two localities and provide non-state funding that is at least equal to what the grants are seeking from the state. Waivers can be granted for applicants from economically distressed areas that would require projects to match only 50 percent.

GO Virginia grants will be administered from two pots of money. About $11 million will be divided among the nine regions based on population. Projects will compete against one another for another statewide pot of $11 million. All grants will need to be approved by both the regional council and the GO Virginia board. They will be scored against a regional council’s diversification plan and evaluated on economic impact, non-state financial contributions, number of localities involved, compatibility with existing programs and project savings anticipated.

Grants may assist existing programs if they expand to additional localities, or they broaden their scope.

Another legislative action from 2016 will encourage localities to work together to secure major investments in the commonwealth. The Virginia Collaborative Economic Development Act encourages localities to collaborate in attracting major investment from companies. The law allows localities, who can show they worked jointly on attracting a project to the region, to receive up to 45 percent of personal income taxes generated from the new jobs for six years.

That legislation applies to projects creating at least 200 jobs paying above the median wage for a region and a capital investment of at least $25 million.  A provision in the law allows requirements to be lowered to 25 new jobs and $1 million of capital investment in cases of fiscal distress or “extraordinary economic opportunity” for the localities.  “That’s the first time the cities and localities have had an interest in creating jobs together,” says Wynne. “That’s why they’ve always fought over the years on who gets the property taxes.”

The GO Virginia board will determine whether the localities can receive the grants.

Another related bill from 2016 created the Virginia Research Investment Committee, which will oversee grants made to help commercialize research at universities. Four members of GO Virginia’s board will serve on the committee.

GO Virginia is unique. When developing the legislation, GO Virginia supporters studied smaller regional initiatives  in Georgia, Indiana, Michigan and Colorado. “These states had pieces of programs that were instructive to our thinking,” says Christopher Lloyd of McGuireWoods Consulting. “We cobbled together some good ideas from each of those and put a Virginia stamp on it.”

Already, other states are interested in Virginia’s regional approach.

“This is a bottom-up approach based on regional priorities,” says Wynne. “The beauty of this is that, for the first time, the state is asking each region to identify its priorities and then saying, ‘Ok, you are in charge of getting this done. We’ll help you, but you’re in charge.’”