Virginia is one of the nation’s leading recipients of federal spending, and there’s a good reason.

The state is home to more than 5,000 defense industry companies, who generate about 10 percent of the state’s economy.

Defense contracting, from shipyards in Hampton Roads to the high-technology belt in Northern Virginia, is a foundation stone of the state’s economy.

Companies based in Virginia had defense contracts worth more than $96 billion for fiscal years 2012-13, according to documents provided by the Department of Defense.

But defense contractors today are hurting.

Automatic defense budget cuts resulting from sequestration, the winding down of the war in Afghanistan and other defense spending reductions have fueled job and revenue losses.

When the sequester kicked in, the White House said that in Virginia approximately 90,000 civilian Department of Defense employees could be furloughed, reducing gross pay by about $648.4 million in total.

Fortunately, the recent passage of the $1.1 trillion fiscal year 2014 Omnibus Appropriations bill has relieved some of the pressure.

Virginia’s U.S. senators, Tim Kaine and Mark Warner, said in a mid-January statement that the bill “offsets the worst effects of sequestration.”

Downward trend
But Paul Grossman, vice president of international trade at the Virginia Economic Development Partnership (VEDP), says that passage of the appropriations bill doesn’t alter the downward trend of defense spending, which is projected to continue for years to come.

For defense contractors, he says, it’s only a reprieve.

“VEDP suggests that companies would be wise to use this reprieve to position themselves to access new revenue streams to replace what will ultimately be less defense spending in the U.S.,” Grossman says.

To raise defense contractors’ awareness that they are not alone in a changing economy, the VEDP has implemented a program that it calls “Going Global.”

The program’s goal is to aid defense companies in finding alternative markets in foreign countries for their products and services, so they can reduce their dependency on the federal government.

The “Going Global” Defense Initiative (GGDI) is working with a budget of $2 million, drawn from state and federal funding, through the fiscal year that ends June 30.

The money will be used to fund various components of the initiative, including:

“Going Global” got off to a fast start when it launched in August, signing up nearly 80 defense-related companies in its first 30 days and accounting for nearly 50 percent of the total program. As of mid-January, 148 companies had signed on.

The response, the VEDP says, is a testament to the program’s significance and necessity.

Today, some components of the program are already fully subscribed and others are filling up.

The “Going Global” program is modeled after the partnership’s VALET (Virginia Leaders in Export Trade) program, which has increased participants’ international sales by an average of 54 percent. VALET has been in place for 12 years and currently enrolls 50 companies. It has graduated 160 companies since its inception.

Martin Briley, president and CEO of the VEDP, has no difficulty pinpointing the event that made him realize Virginia’s defense companies might be facing trouble.

At the start of 2011, then-Secretary of Defense Robert Gates cancelled the Advanced Amphibious Assault Vehicle being developed by Falls Church-based

General Dynamics. Three billion dollars already had been spent on the $15 billion project.

Such losses, he notes, are not only bad for the individuals and companies involved, but also for the commonwealth as a whole.

Briley points out defense contractors have some of the biggest payrolls in the state. “Many of those jobs are over $100,000” in annual pay, he says.

Saving those jobs is a priority. They provide a lot of tax revenues and inject a lot of dollars into the private sector.

Groundbreaking effort
Grossman says the partnership has never before devoted so much concentrated attention to the defense industry. “We’re the first state to do any such program. Our program could be a flagship. We are teaching them a new way to do business.”

Grossman notes that plenty of potential foreign buyers are emerging for Virginia’s defense contractors. He offered one current example. “All [the conflict] going on in Iraq and Syria makes their neighbors more concerned,” he says. “That’s more customers with more money to buy from the defense industry.”

So far, the average size of the defense companies being assisted by the VEDP is 190 employees.

Brian Dearing, vice president of business development and government relations for HDT Expeditionary Systems Inc., says the “Going Global” initiative is innovative and practical. “They focus on things that have impact,” he says.

Based in Ohio, HDT Expeditionary Systems has a number of manufacturing operations in Virginia, including robotics operations in the Fredericksburg area.

The company is known for its shelters, generators, heaters, air-filtration devices and other engineered technologies.

Dearing echoes concerns about the situation faced by the defense industry. “The money is not flowing. There’s no oxygen in the room,” he says. “It’s a tough business, but we’ll get through it.” 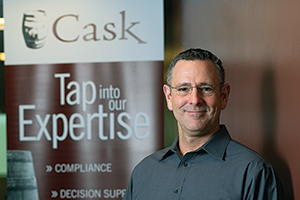 The connection to “Going Global” was made through the Fredericksburg Chamber of Commerce.

Judd says his company, whose biggest clients include the Navy and Marine Corps, now is expanding internationally. The company is opening an office in

Singapore and has established contacts in Europe.

Douglas Burdett, a Norfolk-based defense-marketing consultant, says not all defense companies are acknowledging what he says is a dramatic paradigm shift in their industry. “For defense contractors, a perfect storm of change is brewing — and the denial is Titanic,” he asserts.

He notes that defense contractors are accustomed to telling government customers, “Give us the money, and we’ll develop it.”

But in the private sector internationally, they are told, “‘You develop it and bring it to market,’” Burdett says. “It’s an enormous hurdle culturally.”