Program passes along the benefits of higher education

A college education can change a life.  One James Madison University diploma could change four.

“I am going back to Richmond and adopting my three younger sisters,” says Katrina Shelton, a biology major who graduated from JMU in May. “They are essentially my kids. I love them to death.”

Shelton says she was 8 before a visit to a friend’s house showed her children could have their own rooms and toys. Later she realized living with cockroaches and rats wasn’t something everybody did. When her mother went to prison on a drug conviction, Shelton’s three sisters were separated. One went to live with a grandmother, another with a godmother and the third became homeless.

“I come from a family that has been, I would say, consumed by drugs,” Shelton explains. “At the age of 15, I realized I would have to leave that situation if I ever wanted to succeed. … If I wanted to get out of there, I knew that I had to do that, not only for me, but for my three younger sisters, because I knew they had to be shown someone being a role model.”

Shelton was homeless and on her own at 15. She slept on cardboard, using her jacket and a rock as a pillow. A friend took her in, and a teacher provided guidance. Shelton provided the grit and the effort. She graduated high school with a 4.6 GPA while participating in the marching band and working 40 hours a week at a restaurant. 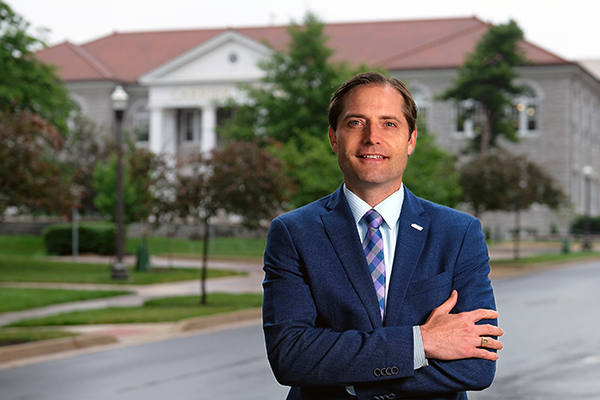 A scholarship created through JMU’s first comprehensive fundraising campaign, which concluded in 2008, helped Shelton attend and succeed at the university. JMU is in its second major fundraising campaign, which was launched last October and ends in 2022. Called “Unleashed: The Campaign for James Madison University,” it’s “rooted in strategic planning,” according to Nick Langridge, the university’s vice president of advancement.

JMU President Jonathan R. Alger conducted a listening tour, visiting with alumni and other friends of the school to discuss their vision of the university’s future. Then a 155-member group composed of faculty, staff, students, alumni and other stakeholders helped develop “The Madison Plan,” a six-year strategic plan. The Unleashed campaign is meant to fund that plan. JMU’s first comprehensive campaign aimed to raise $50 million. It raised $69 million. The current campaign has a goal of $200 million.

A polite place
“Opening Our Doors,” the title of the scholarship-funding portion of the campaign, is a play on JMU’s reputation for politeness. People throughout the campus hold doors open for others all the time. “Most people who come to visit James Madison for the first time can’t believe how friendly the people are,” Langridge says, “and they’re thinking, “Is this some kind of act?”

The act of opening doors for others has become a metaphor, he says. “It’s a symbol of the type of community we have here at James Madison.”

The comprehensive campaign has a lot of priorities, including improving students’ civil engagement, promoting entrepreneurship and building a new basketball arena and a new College of Business learning complex.

“But none is more urgent and more significant than that of  ‘Opening Our Doors,’ the scholarship component,” Langridge says. And none seems to have attracted more support. The campaign aims to raise $80 million for scholarships.

Langridge says $57 million of that goal has already been met. “Nothing touches the heart quite like the idea of a scholarship,” he says. For those who receive them, scholarships can touch more than hearts. Some of them provide the kind of support most students get from other places.

Creating a community
Shelton remembers watching the parents of other students help them unpack when she moved into JMU dorm as a freshman. “My roommate is like, ‘Where are your parents?’” Shelton recalls. “I was like, ‘I don’t have those.’”

The program includes one-on-one meetings with program officials and, for freshmen, six hours of supervised study hall each week of their first semester.

“This program became a parent to me, almost,” Shelton says. It reminded her about deadlines and requirements and what she needed to do to keep up her GPA.

Centennial Scholars also gave her a cohort of students who were facing their own challenges and overcoming them. The program was “essentially making a community,” Shelton says. “They really built me up.”

Shelton has helped build the program that nurtured her, meeting with potential Centennial Scholars, hosting their visits to JMU and helping them prepare for the application process. She also has spoken in support of the new campaign to raise money for more scholarships.

That experience awakened something in her. “I really do like public speaking and trying to make change and implement that into a system,” she says.
Shelton has another goal, too:  “I really, really do want to start writing,” she says. “I want to put my story out there … There are so many other kids like me that can benefit from just me saying my story.”

Foundation for the future
But for the time being, the public speaking will slow down. The writing also may have to wait. Shelton is looking for a job as a lab tech and a place to live where she can provide a home and some support for her sisters. They’re 17, 16 and 12 now, and they all want to go to college.

The oldest sister “wasn’t as academically driven, I would say, as me,” Shelton says, but she graduated from high school on time this spring and plans to attend a community college this fall. Eventually, if things go well, she’ll transfer to a four-year school. Shelton hopes it will be JMU. But nothing that far into the future is settled.

“Now that she’s really out of this really toxic situation,” Shelton says, “it’ll be her first time that she can essentially process who she wants to be or what she wants to do.”

“It essentially set down the foundation for my future,” Shelton says, “not only mine, but for my three younger sisters.