Home News Picking up the pieces

Picking up the pieces

At 3:30 a.m. Sunday, May 30, Greg Milefsky stood in the middle of his store, Balance Bicycle Shop, on Richmond’s West Broad Street. The windows were broken, and the bikes — those for sale and ones left by customers for repair — were all gone.

“People were coming in and stealing everything that was left,” Milefsky said Monday. “I unplugged my server and computer and left the way I came, through the broken window.”

Balance Bicycle Shop has been in business eight years at its location near Virginia Commonwealth University. In the early hours of Sunday, it was ground zero for some of the worst civil unrest Richmond has seen in decades.

In downtown Richmond, in an eclectic, mostly local arts-focused business district, protests prompted by the killing of George Floyd in Minneapolis turned violent Friday and Saturday night. Police were out in force, setting off canisters of tear gas and using pepper spray, while some in the crowds of protesters tagged buildings and windows with spray paint, busted in windows, looted stores and set fires. More than 230 people were arrested Sunday after a citywide 8 p.m. curfew went into effect. Gov. Ralph Northam called a state of emergency, and other Virginia cities and counties saw smaller protests, many of which were peaceful. Virginia Beach and Fredericksburg saw protests turn violent, and the city of Lynchburg set a voluntary 8 p.m. curfew Monday.

On Friday, a police car was torched in front of the Richmond Police Department office on Grace Street and a GRTC Transit System Pulse bus was set on fire in the middle of West Broad Street. The bus cost approximately $470,000, a GRTC spokeswoman said, and the driver had to get out after “protesters surrounded and started swarming the bus. There was no clear option for the driver to move the bus without endangering the lives of protesters.” To the west, Confederate monuments on Monument Avenue were spray-painted with slogans decrying the police and white supremacy.

By Saturday night, minor damage such as graffiti tags had progressed to fires set in the streets, and then came extensive property damage, including a couple of small structure fires and looting of stores on Broad Street. Many affected businesses had only recently reopened after shutdown orders due to the COVID-19 pandemic.

By 11 p.m. Saturday, Milefsky said, “it became obvious I was going to be looted. You could see the progression down to the shop.” Nearby Kroger and Rite-Aid stores were “absolutely decimated,” he said, and other businesses around his store were damaged.

People were smashing in windows with bricks and cobblestones, added Gordon Stettinius, owner of Candela’s Books + Gallery, further east on Broad. He spoke to people who were there — fellow business owners included — in the aftermath, as he and a crew of friends and colleagues boarded up the gallery Sunday and moved valuable pieces of art elsewhere.

City Councilor Kim Gray and her daughter were on the scene “when it went sideways” around 1 a.m. Sunday, Stettinius said. Gray, who is running for mayor, took cobblestones out of people’s hands, he said. “The reason I have windows is directly because of Kim Gray. She was tamping down the madness somewhat.”

A Virginia ABC store was broken into and looted that night, and Stettinius said a fellow gallery owner saw “a white dude with a sledgehammer” smashing a window at Corporate & Museum Frame, another store on Broad.

Paul Trible, co-founder and CEO of Ledbury, checked on his downtown Broad Street store during the day Saturday, after the first night of violent protests. “But then Saturday night — we were not down there, but we got a call from one of our neighbors around 10:45 or so that someone had thrown a brick and broken the windows [at the neighbor’s store].”

Trible watched on Twitter a video of “someone jumping out of our store window with a handful of shirts, and actually two people who were there at the protest told people not to loot and take things. They actually followed this guy, ran after him down into Jackson Ward, like, ‘What are you doing? That’s not what this is about.’ We have that footage.”

Jasmine Jahangiri, whose father opened Coliseum Deli 17 years ago in the midst of VCU’s campus, said a large window at their deli was broken after they had closed for the night. Looters “stole cash and soda, sprayed sodas everywhere. They stole some gum and candy, which makes me think they’re kids.” A volunteer said he’d paint a mural on the board covering the broken window, she said.

“We understand the protests,” Jahangiri said of herself and her parents, who emigrated to the United States from Iran. “I personally think the peaceful protests are the way to change, [but] people deserve to be angry. It makes me mad.”

Over on nearby Grace Street, the 120-year-old Waller & Co. Jewelry store — owned by a black family for generations — was also broken into, with watches and men’s jewelry items stolen. A group of volunteers from black sororities and fraternities at Virginia Union University and VCU helped repair damage and bought some of the store’s Greek organization merchandise over the weekend. Others helped set up a GoFundMe page to defray expenses, although the store is covered by insurance. Waller & Co. had just reopened the shop Friday after being closed for two months due to the coronavirus pandemic.

Leonetty Gray, whose grandfather opened the store in 1900, stood in front of the shop Saturday night for more than three hours trying to protect it, until she felt unsafe and went home. “It was definitely very scary, but I was not going to let them destroy my family’s legacy.” She and her mother, Betty Waller, are the third and fourth generations of Wallers to work in the store, which is now owned by Betty Waller’s brother, Richard. The family is determined to reopen after the curfew is lifted and it is safe again.

Preparing for the worst

After the ABC store on West Broad Street was looted late Saturday, that location and eight other ABC stores in the city were boarded up, said Taylor Thornberg, a spokesperson for the Virginia Alcoholic Beverage Control Authority. Twenty other ABC stores are closing an hour early at 6 p.m., and ABC is working with local law enforcement on plans to close other stores early.

In Richmond’s Carytown shopping district, which is a couple of miles southwest from the heaviest protests, three stores were broken into over the weekend. Many merchants were taking precautions Monday, with a protest march scheduled for 5 p.m. on Main Street, a block from Carytown. Store owners were less worried about the march, which is likely to be over before Richmond’s 8 p.m. curfew, but were concerned about the possibility of violence later in the night.

Cary Court shopping center was about to be entirely boarded up, as workers hired by property management company Sauer Properties Inc. came bearing planks of wood and tools. In the shopping center, Schwarzschild Jewelers was broken into, and two of its display cases were draped with cloth Monday. Police are investigating, said Kiley Schiffman Storrs, director of marketing for Schiffman’s Jewelers, which owns Schwarzschild’s four stores in Richmond and Charlottesville.

“We completely believe in everyone’s right to free speech,” said Storrs, who is based in North Carolina. “For us, the vandalism is a bit of a shock.”

Down the street, the clothing, shoe and housewares shop Need Supply Co. was protected by plywood and locked after it too was broken into late Saturday, and many other stores and restaurants were boarded up or in the process of doing so. Others placed signs in the windows saying “Black Lives Matter” and “Locally Owned,” hoping for the best.

Several merchants said they agree wholeheartedly with the views of protesters, many of whom say they are marching not only on Floyd’s behalf but for all unarmed black people who have been killed by police. The 2018 killing of Marcus-David Peters, a 24-year-old teacher who was shot by a Richmond police officer who was not charged, is still a source of deep community pain and anger.

Lisa McSherry owns two shops — Mamie’s Apothecary, a months-old bath and cosmetics shop, and the 24-year-old formal dress boutique Lex’s of Carytown. She didn’t plan to board up her windows, which can be expensive for small businesses. The break-ins in Carytown were “very targeted and very criminal,” she said, and seemed more calculated than the damage done on Broad.

Between the pandemic, Richmond’s two-week delay of Phase One of the governor’s reopening plan, and the protests, “it’s just a perfect storm” for small business owners, McSherry said. She, too, supports the aim of the protests, but added, “I wish it were more peaceful. The daytime ones have appeared to be calm. Nighttime comes and it’s a different vibe.”

Jim Bland, owner of Plan 9 Records, removed most signs and merchandise away from his windows but had not decided to board them up on Monday afternoon. The music store had just reopened, and Bland had begun bringing his employees back to work after closing in mid-March.

“It depends on what we hear during the day,” he said of the possibility of putting up plywood sheets. “I hate the message that it sends.”

Christopher Turner, who has sold flower arrangements both online and outside Can Can Brasserie in Carytown for eight years, also takes a broad view of the situation. “Some people stole some stuff from me Sunday,” he said Monday. “Life is more important than money, but I do want to make my money.”

The owners all say that they’re thankful for the help of their customers, their friends and family members, even strangers who showed up to sweep, nail plywood to protect their businesses, and those who have made donations in the wake of the violence.

Milefsky started a GoFundMe page even though he didn’t want to, “because there were so many people that said they were going to do it for me.” The money, he said, is first going to pay back his customers for their stolen bikes and then to “keep my employees paid.”

He also plans to rebuild, but not in Richmond. He says there’s bound to be more killings in the future and more protests, potentially followed by looting and other damage.

“I can’t spend six months rebuilding my business, only for it to be looted again,” Milefsky said. “I will be looking in Henrico, Hanover, Chesterfield to rebuild.”

Here are fundraising pages for other locally owned businesses damaged in Richmond:

Assistant Editor Sydney Lake contributed to this story. Click on photos below to enlarge them. 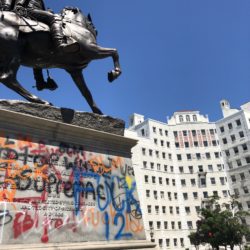