This summer Fredericksburg government officials touted the news that the city had reached a deal to relocate the Potomac Nationals baseball team there by 2020. The team had been unable to reach a deal for financing assistance from Prince William County, where they have been based since 1984.

In November, the Fredericksburg  City Council approved a development and shared-use agreement with  the team, which expects to break ground on a 5,000-seat, $35 million stadium in early 2019. The stadium will be privately financed by the team, but the city will pay the team $1.05 million annually for 30 years to lease the facility. And the city’s guaranteed payments will help the team secure debt financing.

“It’s a pretty unique deal structure that we think serves the citizens of Fredericksburg while also bringing to town a significant new quality-of-life and entertainment amenity,” says Bill Freehling, the city’s director of economic development and tourism.

The deal is just one example of the part many cities play in financing the construction of stadiums and other venues for professional sports teams.

Boosters of such projects proclaim that stadiums are a worthy investment of taxpayer dollars because the facilities improve a community’s overall quality of life, bring in ancillary revenues and aid economic development efforts by making a community more attractive to prospective businesses and workers.

However, there are others — like a George Mason University economics expert who has studied the business of stadiums — who say that stadiums are at best boondoogles and at worst inappropriate beneficiaries of public funds.

“I like Minor League Baseball, and I like sports in general. I just think that we’d be able to enjoy it even more if taxpayers weren’t on the hook to subsidize the profits of wealthy businessmen,” says Michael D. Farren, a research fellow at George Mason University’s Mercatus Center, a public policy research center. Farren has studied the use of public financing for private sports venues and has written newspaper opinion pieces about several projects, including the proposed Fredericksburg stadium.

Fredericksburg expects to break even or come out ahead on the stadium deal, Freehling says. The city estimates that much of its $1.05 million payments will be offset by tax revenues from the stadium as well as $100,000 per year pledged by the proposed stadium developer. Additionally, the city expects to earn at least $250,000 per year by staging nonsporting events such as concerts at the stadium in the off-season.

Norfolk’s Harbor Park baseball stadium, which opened in 1993, was also built via a public-private partnership. The city government took out debt service for the $16 million stadium and received annual $1 million lease payments from the owners of the minor-league Norfolk Tides for 20 years to offset the city’s debt payments. The city received additional income from related tourism, meals taxes and parking revenues. 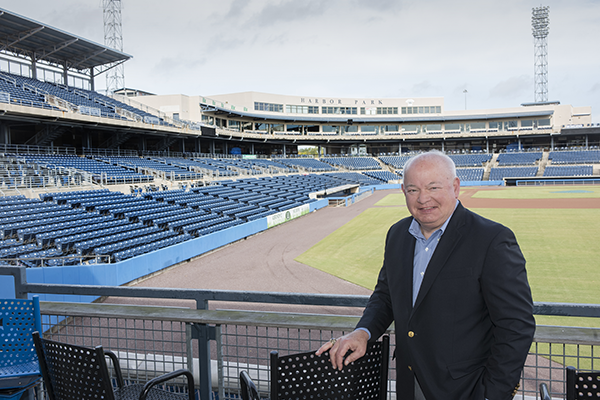 Harbor Park “became a great win-win for the [team] and the city,” says former Norfolk Mayor Paul Fraim, who helped put the city’s stadium deal together. “I think it’s been pretty much a model of a good public-private partnership in professional sports.”

With partnerships such as these, though, Farren says, taxpayers should question whether supporting a sports stadium is the best use of public funding. There is usually only a 20- to 30-year guarantee that the team will stay in a city, he says. And unlike supporting a nonprofit- or government-owned museum or park, the city’s money is subsidizing a for-profit venue that sells admission tickets.

“Government spending makes the most sense when it’s limited to something that’s actually providing a real public good and not a private good,” says Farren.

Another problem, he adds, is that local governments are limited in how much debt they can take on without damaging their bond ratings or finances. When a locality takes on debt service for a sports stadium, that obligation diminishes its ability to borrow money for other big capital projects such as building schools.

However, that dilemma doesn’t apply to Fredericksburg’s deal with the Potomac Nationals because the city isn’t taking on any debt. And because the city’s promised $1 million annual payments to the team are expected to be offset by taxes and stadium-related revenues, those payments would not count against the city’s borrowing power, Freehling says.

Paying for stadiums isn’t always a popular proposition with voters, no matter how much they enjoy sports, Farren says. A 2014 survey by Fairleigh Dickinson University’s PublicMind Poll found that 69 percent of Americans object to the use of taxpayer funds to finance pro sports stadiums, and 71 percent disagree with offering tax breaks to lure a team to a city.

Professional sports teams often pit state and local governments against one other to secure the best possible offers of public financing for their stadiums, Farren says. For instance, the Loudoun County-based Washington Redskins, which have said they want a new $1 billion stadium by 2027, have been talking with Virginia, Maryland and Washington, D.C., officials about potential public financing for the project.

There have been some discussions of a bipartisan interstate compact to prevent a bidding war by the three governments, but so far there’s been little political will for entering into such an agreement, Farren notes, even though he says there would be no net regional economic gain from moving the team from FedExField in Maryland to another spot in the greater D.C. metro area.

Richmond’s city government hailed the Washington Redskins in 2012, footing the cost for an $11 million training camp where the Redskins play three weeks each summer. The camp hasn’t brought in promised crowds and tourism. This year it was revealed that the city diverted $5 million from its school construction budget to help pay for the facility.

City Council members have said they’ll consider extending the Redskins’ lease for the facility, which expires in 2020, only if the $2.85 billion NFL football franchise steps up and takes over the facility’s remaining costs, which totaled about $8.6 million at the beginning of this year. Currently, in addition to the $750,000 per year the city government is obligated to repay in stadium debt over the next 15 years, the government also pays the Redskins $500,000 a year to train in Richmond. Government officials and residents have lambasted the deal, saying the money should be going to improving the city’s deteriorating schools and roads.

Richmond Mayor Levar Stoney, who was elected in 2016, has said if the Redskins elect to keep training in Richmond after 2020, the terms will be different and the city will not agree to continue making payments to the team. Stoney told Richmond television station WTVR this summer, “I just don’t think the city of Richmond should be providing a cash subsidy to one of the wealthiest [sports] franchises in all of the world.” As of October, the situation had not been publicly resolved and the city remained committed to canceling the Redskins’ lease.

The Redskins’ economic impact projections for the training camp were based on tourism estimates that failed to materialize, and it’s been difficult to measure its economic impact, says Richmond City Councilwoman Kimberly Gray, who questions whether the city has learned its lesson about investing in private sports ventures.

Her district includes the trendy, fast-growing Scott’s Addition district as well as The Diamond, the baseball stadium that is home to the city’s popular Minor League Baseball team, the Richmond Flying Squirrels. The Squirrels have long been asking the city to build a new stadium to replace the deteriorating Diamond, which was built in 1985.

In 2016 the Squirrels signed a memorandum of understanding with Virginia Commonwealth University and the city of Richmond, stating that the parties intended to partner in a proposal to build a $55 million stadium. The project would be funded largely by the Squirrels and VCU, which also would use the stadium. The city’s role in the project was unclear.

The city government, VCU and the Flying Squirrels’ management will not comment on the current status of the 2016 agreement, but local media reports have said the new stadium would likely be built on a nearby, state-owned 21.5-acre parcel currently occupied by the Virginia Department of Alcoholic Beverage Control (ABC). The department plans to move its headquarters and distribution warehouse to Hanover County.

Gray says that she and other council members have not been briefed on the status of the project, and she’s hesitant to vote in favor of putting any city taxpayer funds into a ballpark when the city has other pressing needs.

“I’m a believer in the unifying force of having a team like the Squirrels and the excitement and the memories that are created of taking your family out of the ballpark,” Gray says. “However, if it’s not paying the bills, it’s just not something that we can afford to add to our plate. If it’s not bringing in a positive revenue stream that’s going to offset the expense of having it, then it’s really hard to make that case [to pay for a stadium with city funds] when we’re not able to meet the basic needs of our citizens.”