Why they are influential: For years Ukrop family members were known as the owners of Richmond’s most successful grocery company. These days, Ted and Katie Ukrop are putting the city on the map with their stylish Quirk Hotel in downtown Richmond. The hotel opened in September 2015 just before an international cycling race came to town. The renovation of a historic department store building into a 74-room hotel with original art and a rooftop bar has drawn national press and accolades, raising Richmond’s profile as a tourist destination.  Ted and Katie met while they were students at DePauw University. They are devoted to the arts and own an art gallery adjacent to the hotel. Their Fan District home recently was featured on the cover of House Beautiful. It seemed fitting that the couple’s pink front parlor showed a bright pop of color, just like the rooms at the hotel. The Ukrops are active in civic affairs. Ted’s newest challenge is serving on the board of the Virginia Capitol Trail Foundation.

Recent developments:  The Ukrops are moving forward with plans to expand their boutique brand to Charlottesville. “We did not initially intend to have more than one Quirk hotel,” Ted says. Occupancy rates in Charlottesville, however, are higher than in Richmond, he says. Plus the area is a popular wedding destination.

Why they are influential:  Last year the couple donated $5.9 million to Longwood University for the Brock Endowment for Transformational Learning and $2 million to the Cleveland Clinic’s Respiratory Institute to establish The Macon and Joan Brock Endowed Chair. In 2015 they received the Outstanding Philanthropist award from the Association of Fundraising Professionals. Over the years, their donations have totaled more than $50 million. Macon is co-founder of Chesapeake-based Dollar Tree Inc. where he continues to serve as chairman of the board. He is also vice chair of the Hampton Roads Community Foundation and a Virginia Aquarium trustee emeritus. Joan is a former chair of the Chrysler Museum of Art board of trustees.

Recent developments:  Macon Brock’s book “One Buck At A Time: An Insider’s Account of How Dollar Tree Remade American Retail” was released in February. 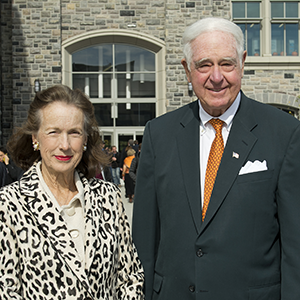 Why they are influential: The Goodwins are avid philanthropists. They offered $150 million towards the development of an independent children’s hospital in Richmond area. The project came to a halt, however, when two major players, the Virginia Commonwealth University and Bon Secours Richmond health systems, backed out in 2015. The Goodwins say they are disappointed but still are willing to assist with the project if there is renewed interest. Bill is the retired chairman and president of Riverstone Group LLC, the parent company of CCA Industries and CCA Financial Inc., which own The Jefferson Hotel in Richmond and Kiawah Island Golf Resort in South Carolina. His term as rector at the University of Virginia expires on June 30. Alice is on the board of The Virginia Home, which provides care to adults with permanent physical disabilities. 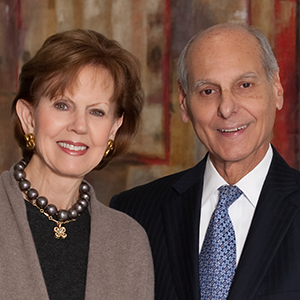 Why they are influential: As a business attorney for Kaufman & Canoles, Vince continues to help guide some of Hampton Roads’ biggest deals. In addition to his legal work, he serves on several boards, including the boards of the Eastern Virginia Medical School and Sentara and Hampton Roads Community foundations. Suzanne is active in the arts community, including serving on the board of trustees at the Chrysler Museum of Art.

Recent developments:  Vince is working with ADP, a major payroll processing and human resources company, that is bringing up to 1,800 jobs to Norfolk and the developer of the adjacent Bank of America tower that is being converted into 300 residential units. Although he declined to name his client, Vince has been helping the Port of Virginia with its expansion plans and continues to work on a 400-acre mega-site in Chesapeake. Suzanne is helping with the Chrysler Museum’s plans to host the national conference of the Glass Art Society in June. 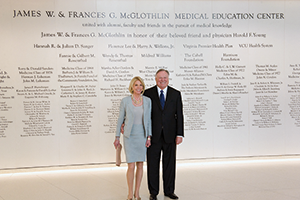 Why they are influential:  The McGlothlins’ gifts have been the catalysts for many cultural, educational and charitable projects throughout Virginia. They are perhaps best known for their contributions to the Virginia Museum of Fine Arts. In addition to giving the museum $30 million, the McGlothlins donated their 73-piece American art collection, worth more than $200 million. The McGlothlins also have made major donations to the VCU School of Medicine, the College of William and Mary, Mountain Mission School in Grundy, and The Morrison School in Bristol while creating many programs assisting needy families in Southwest Virginia.

Recent developments: In October, the College of William and Mary hosted its sixth annual McGlothlin Leadership Forum, a program begun by the couple to bring national leaders to the Williamsburg campus.