Burke Estes, the starting quarterback on Randolph-Macon College’s football team and a presidential scholar, described the defining difference between going to a large state university and attending the Ashland school.

“My best friend is at the University of North Carolina, Chapel Hill [which has an enrollment of more than 30,000 students]. He walks across campus every morning with his headphones on and never sees anyone he knows.

“At Randolph-Macon [with an enrollment of about 1,500] I’ll walk across campus every morning and see at least five people I know, right away,” including some of his professors, says Estes, a 19-year-old from Wilmington, N.C.

When Estes was looking at colleges as a high-school senior, he asked himself a crucial question: If he got hurt and couldn’t play football, where would he still be happy? Where would he still feel comfortable?  “Randolph-Macon,” Estes concluded.

That assessment is music to the ears of Robert Lindgren, now  in his 12th year as president of the school, the oldest Methodist-related college in continuous operation in the U.S.

“I think one of the challenges we face today is helping young people, prospective students and families understand that just because you don’t have thousands of students walking around and large flashy buildings, it doesn’t mean you can’t provide the kind of educational experience that will be meaningful to them,” Lindgren says.

Lindgren adds that every year the college surveys seniors to determine what they valued most about their experience at Randolph-Macon, now in its 187th year.
Invariably, he says, what rises to the top of the survey is the student’s relationship with a faculty member.

$125 million campaign
Lindgren, 63, with the help of major donors, has transformed the college’s campus through an ambitious $125 million fundraising campaign that was highlighted recently with the dedication of a new $17.5 million science building.
It was named for the college’s major donor, the late Macon F. Brock Jr., a member of the class of 1964. Brock, a co-founder of the Chesapeake-based Dollar Tree Inc., was a Latin major at his alma mater.

Brock’s name also is on other major buildings, such as the student center and the sports and recreation center.

“If you look at the history of higher education … the most successful places have had a major benefactor or benefactors,” Lindgren says, noting that Macon Brock and his wife, Joan, set an example that led other donors, large and small and 12,000 in all, to contribute to the college’s comprehensive campaign.

Brock died in mid-December, after building Dollar Tree into a retailing juggernaut with more than 14,000 outlets in the U.S. and Canada.

“He was a constant, warm and vibrant presence on our campus and a friend to everyone he knew. The impact of Macon and Joan’s generosity can be seen and felt everywhere on our campus,” Lindgren says, in reflecting on Brock’s passing.

The college’s successful fundraising campaign, which included construction of new residence halls, athletic facilities and a student center, was ultimately focused on a single theme.

“Growing the college,” says Lindgren, who emphasized throughout the campaign that every gift counted, noting that Randolph-Macon ranks 15th in the country in alumni loyalty.

Creating ‘a little more commotion’
For about 20 years, Randolph-Macon held steady at approximately 1,100 students. But Lindgren says that to operate successfully and compete against large public institutions and private competitors, the college needed to scale up enrollment and “create a little more commotion on campus.”

Lindgren says the college also improved its pre-med program, adding a pre-med coach for students and providing scholarship opportunities, all thanks to a donor who left half of his estate to Randolph-Macon.

The past few years have been upbeat for Randolph-Macon as new buildings and new programs have sprung up. 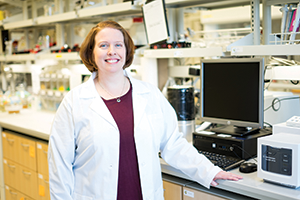 It’s also been a a successful time for  chemistry professor April Marchetti, R-MC ’97. In 2015, she led a team that won the largest grant ever received by the college, nearly $1.2 million from the National Science Foundation, to establish a program to train STEM (science, technology, engineering and mathematics) teachers for high-need local school districts.

The program will support 16 to 18 full scholarships for the students, who then agree to teach for at least four years in area high-need school districts, where STEM teachers have been hard to recruit.

Marchetti says she was adamant that the students get full scholarships, so they wouldn’t graduate with student debt  — a major deterrent for students who might want to go into teaching, which historically provides only modest salaries.

“There’s a shortage of STEM teachers, especially in high-risk school districts,” Marchetti observes, adding that  teachers are the conduit for capable students who can fill much-needed STEM jobs.

This year Marchetti and her team won a $300,000 grant from the National Science Foundation to recruit and identify Hispanic girls in their freshman year of high school who show an interest in STEM disciplines. The program is known as “Pathways to Science.”

Students go through a competitive selection process. Those who were chosen and had completed a science-based summer program last year received a $2,500 scholarship that will go toward the college of their choice. The science camp will be offered again this summer, and students who attend both camps receive $5,000 scholarships for college.

Marchetti says having those programs shows that a small school like Randolph-Macon can compete successfully for major grants from the National Science Foundation.

One of the payoffs: “Maybe they’ll think of us again, because now they know we can do it,” Marchetti says.

Battling misconceptions
Fraser Mayberry, a 21-year-old Randolph-Macon senior from Midlothian majoring in psychology with a minor in elementary education, says a lot of her friends went to big research universities. She’s had to battle some misconceptions about what a liberal arts education at a small college means.

“I think a lot of people [believe] that a small liberal arts school means ‘easy.’ That you sit out under the trees all day.

“What I try to show them is that we have a focused, rigorous academic program. It’s not easy,” Mayberry says.

The success of the college’s most recent strategic plan — involving new and renovated facilities totaling $80 million and a 25 percent jump in new student enrollment — prompted the college to extend the plan until 2020.

Lindgren says the intent is for Randolph-Macon to grow even larger, in enrollment and facilities, though the exact goals have yet to be announced.

“The key is we want to grow, but we don’t want to change the culture of Randolph-Macon,” Lindgren says.

That means adding more faculty, so that students continue to interact with their professors in classes. Students in these classes are called on frequently, write more extensively and are monitored for measureable outcomes.

The Randolph-Macon president says he has the job he had often thought about, and he wants to remain in that position as long as he is able, and as long as the college wants him.

“I always had in mind that a college like this, a residential liberal arts college, would be a great place to be because of the impact, the kind of personal impact it has on students. And that happens at every level,” Lindgren says.