Standing in the backyard of an Ashland supporter not long ago, Jack Trammell greeted well-wishers at a fundraising and get-acquainted session, letting people take a good look at him.

He will be doing that a lot. Trammell is an unknown dropped into the middle of what likely will be one of the most-watched congressional elections in the country.

The attention will come not because Trammell, a Democrat, is in the race. It’s because of his opponent, Republican Dave Brat, who until June was an unknown like Trammell.

Then came the upset that turned the political world on its head.

Brat, a tea party-backed insurgent, defeated seven-term Rep. Eric Cantor in the 7th District Republican primary. His victory over the House majority leader marked one of the biggest political upsets in American history.

The Brat-Trammell race is one of two congressional races in Virginia that will be in the spotlight this November.

The other is in the 10th District. The retirement of longtime Rep. Frank Wolf has triggered a scramble to fill a seat in the rapidly changing exurbs of Northern Virginia where Wolf, a Republican, has held sway for more than 30 years.

They could have asked Trammell.

He has known Brat for a long time  — playing basketball together and sharing conversations.

They are both 50 years old and professors at Randolph-Macon College in Ashland, which has 1,300 students. The election between two professors is the biggest news to hit the campus in a very long time, maybe ever.
Brat, an economics professor, and Trammell, a sociology professor and the college’s director of disability support services, will be competing to fill Cantor’s seat in Congress.

The race in this conservative district could well be a barometer of how the fissure between the tea party and the Republican establishment could affect general elections.

“I’m going after some of the same Republicans that Dave is,” Trammell says.

Those likely would be more traditional Republicans who might have a bone to pick with Brat because of his furious attacks against Cantor, saying he was invisible in the district and wasn’t conservative enough in these right-leaning times for the GOP.

The party fracture was illustrated when the 7th District Republican Committee this summer denied a $300,000 funding request from Brat’s campaign.

In a mid-August news release, however, Brat insisted that the party is now unified behind his candidacy.
But is it?

Orange County is one of the few areas that supported Cantor in the primary, and a former chairman of the county’s Republican committee says it is going to be harder to get Republicans to the polls.

“Right or wrong, there are some hard feelings,” says Doug Rogers, the former chairman. “I’m worried about the ones who are not going to vote.”

If the Republican turnout is low, Rogers says, it could be a good opportunity for Democrats. “I’m going to say, ‘Let’s get away from the upset feelings … we’re all Republicans,’ ” Rogers says.

Democrats in the 7th District are primed to pounce if Brat’s appeal falters.

“The Republican Party has been hijacked by an extremist view. Jack [Trammell] is going to reach across the aisle,” Easter says.

Even though their two-professor race may be unconventional, Brat and Trammell are adhering to the traditional themes of their respective parties.
In part, Brat trounced Cantor by taking a hardline anti-immigration stand and accusing Cantor of favoring amnesty for illegal immigrants living in the U.S., a charge that Cantor’s staff repeatedly denied.

Brat says he fully values illegal immigrants as human beings. But he says increasing the labor supply with low-wage workers will cause the wages of American workers to fall and jobs to be lost.

“This is about the economy and the self-interest of the people of the 7th [District],” Brat says.

He also favors defunding the Affordable Care Act, also known as Obamacare, and says he will support a balanced budget amendment if he gets to Congress.

“There are a lot of moving parts to immigration. And we need to work across the aisles. But one part that’s not moving is the House. And that’s something I would like to change,” he told an interviewer on MSNBC.
Trammell has said he also favors expanded health care and reproductive rights for women.

Despite a dispute over money within his party, Brat has a sizeable lead in fundraising over Trammell. 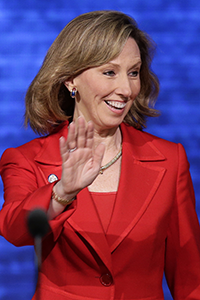 The other big congressional race drawing attention in Virginia is in the 10th District, where 17-term Republican Congressman Frank Wolf, a Northern Virginia institution, has announced his retirement.

Republican nominee Barbara Comstock, 55, a lawyer and member of the House of Delegates who is a former senior aide to Wolf, is running with his endorsement to keep the district in GOP hands.

She worked for the Justice Department during President George W. Bush’s administration and was first elected to the House of Delegates in 2009.

Democratic candidate John Foust, who will be 63 by election time, also is  a lawyer and member of the Fairfax County Board of Supervisors. He is hoping to wrest the seat away from Republicans.

Wolf has kept the 10th District reliably Republican since 1981. When he announced his retirement, he was the longest-serving member of Congress from Virginia.

He also held a senior position on the powerful House Appropriations Committee.

But his reign is over, and Democrats sense an opportunity.

As a conservative, Comstock takes the traditional Republican position on the Affordable Care Act: she wants to repeal the legislation that established it.

“My campaign is focused on the 21st century, putting people back to work, making sure we’re strengthening our military, so we have a strong defense industry in our district,” Comstock told “Fox & Friends.” 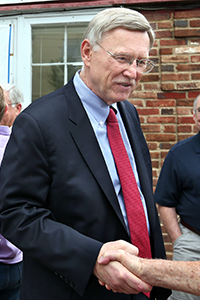 He is in favor of allowing women to make their own health-care decisions, including the right to an abortion, and he emphasizes the right of women to have equal pay for equal work.

On immigration, Foust says he believes in reforms that secure the nation’s borders but also address “in a practical and compassionate way the issue of millions of undocumented immigrants currently living in the United States.”

Both Comstock and Foust have been building substantial war chests in their run for Congress.

Since that report, the Republican Congressional Leadership Fund political action committee announced it will spend $1 million to help elect Comstock.

Stephen Farnsworth, director of the Center for Leadership and Media Studies at the University of Mary Washington, says Republican gerrymandering has engineered the 10th District, as well as the 7th District, toward the election of Republican candidates.

“Comstock is an experienced politician and has been effective in being elected to the [Virginia] House of Delegates. This congressional district is easier to win than her House of Delegates district,” Farnsworth says.

He notes that while there has been growing diversity in the eastern section of the 10th District, the area between Dulles and the West Virginia line is still staunchly conservative.

For Brat in the 7th District and Comstock in the 10th, Farnsworth argues that it’s their election to lose.