Frank Macrina has a lot to smile about these days.

Last year in fact marked the eighth time in a decade that researchers at the Richmond university have propelled its sponsored research to record levels. (Sponsored research involves external funding sources such as foundations, corporations and the federal government.)

One primary reason for the most recent surge is a 12 percent increase in research sponsored by the federal government, which in 2015 topped $156 million, and a 10 percent jump in awards from the National Institutes of Health, which in 2015 reached $88 million.

“That is a remarkable feat,” Macrina says. “Everyone is competing for finite amounts of money. It’s been tough sledding for universities.”

The most successful researchers, he says, are those “who are identifying the right problems and answering the right questions.” 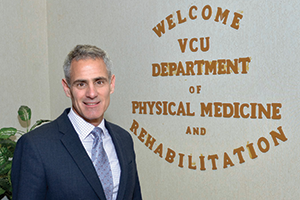 One of VCU’s most prominent names  in research is David Cifu, a specialist in brain injury rehabilitation who also is the national director of the PM&R (Physical Medicine and Rehabilitation) Program Office for the Veterans Health Administration.

In 2013, VCU received a $62 million federal grant from the departments of Defense and Veterans Affairs to oversee a national research consortium of universities, hospitals and clinics. They are studying what happens to military personnel who suffer traumatic brain injuries or concussions.

Cifu is the study’s principal investigator. He says brain injuries and concussions are a huge challenge for the military. The problem has intensified since the 9/11 attacks nearly 15 years ago and the subsequent deployment of U.S. military personnel around the globe to fight terrorists.

The members of the research consortium have been studying groups of veterans injured in earlier conflicts, such as those in Korea and Vietnam, as well as more recent wars in Iraq and Afghanistan.

One of the most important goals is to try to develop ways to prevent long-term disabilities such as dementia that might develop later in life.  “We’re going to figure this out,” says Cifu.

He also is a co-principal investigator on a $17 million grant funded by the Defense  Department in 2014 to improve clinical trials in the hope of treating traumatic brain injuries.

Cifu and his colleagues say that even a mild concussion can trigger physical and cognitive problems for months and even years after the injuries occur.
He adds that the consortium’s findings will be shared not only with the military but also with the general public. 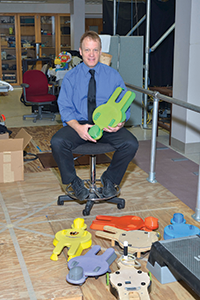 Pidcoe, who holds doctorates in biomedical engineering and physical therapy, has developed a motorized, skateboard-like device to facilitate crawling for infants with a variety of disabilities, including cerebral palsy.

Pidcoe says it’s important that infants learn to crawl because the activity stimulates portions of the brain critical to learning.

“It all comes back to the environment,” Pidcoe says, noting that babies who don’t explore and interact with their environments can suffer from delayed cognitive development.

A patent for the motorized crawler was issued in 2015, a banner year for patents at VCU.  A total of 17 patents were issued, an increase of about 50 percent from the previous year and a record total. Licensing revenues for patents also were up by 50 percent, to more than $2.5 million, the university reports.

One market analyst has told Pidcoe that besides helping at-risk infants, the crawler might also be marketed to parents who want to give their children a head start in learning how to crawl.

But Pidcoe knows that, for every hit, inventors have a lot of misses. Sometimes, the market isn’t ready for what they have to offer.

The VCU researcher recalls that Reebok, the footwear and apparel company, asked him to develop a device that could be inserted in a shoe to measure foot strikes. The company would use the information to determine how well a shoe holds up over time. “It looked like a stick of gum,” Pidcoe says of the device.

He believed his invention had other applications, but he couldn’t find anyone interested in exploring them.

A couple of years later, he says, Nike announced a collaboration with Apple for a small transmitter to be attached or imbedded in a shoe. The transmitter would track the wearer’s walking or running history, sending that information to an iPod or a similar product.

Thinking of his own running shoe device, Pidcoe can only sigh. “It was ahead of its time,” he says. 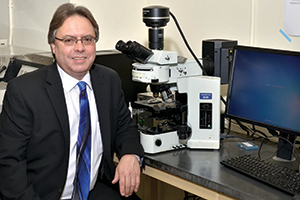 Sometimes a product that hasn’t been marketable suddenly becomes hot. Richard Marconi, a professor of microbiology and immunology at VCU, has had that experience.

For decades Marconi has sought a human vaccine for Lyme disease, which is spread by Ixodes ticks, also known as deer ticks.

Lyme disease usually begins as a rash, but it can spread to other parts of the body and wreck organs, the nervous system, muscles, joints and the heart.
Marconi says that for many years pharmaceutical companies didn’t have a lot of interest in a Lyme disease vaccine because the potential market was considered too small. Only about 20,000 Lyme disease cases involving people were reported each year, according to the Centers for Disease Control and Prevention (CDC).

Then, in 2013, the situation changed. After looking at insurance records and other data, the CDC concluded the number of Lyme cases had been grossly underreported.

“The actual number was 300,000 to 600,000 cases,” Marconi says, and those were only the cases in the U.S. He says in Europe and other parts of the world Lyme disease is even more widespread.

Suddenly, the search for a Lyme disease vaccine for humans became a scorching hot topic not only among scientists, but among drug companies.
Marconi and his research team had brought to market a canine vaccine for Lyme disease. Marconi believes the product has a competitive advantage because it not only inhibits the transmission of Lyme disease, but also kills the bacteria once it enters a mammal.

Now, his team is turning its attention to a human vaccine, and Marconi has been fielding calls around the globe from scientists and the news media. “The excitement level for everyone in the lab has ratcheted up,” Marconi says. “It’s a tremendous satisfaction to be part of something that improves human or animal health.”

More information on research at Virginia Commonwealth University at the Office of Research and Innovation.